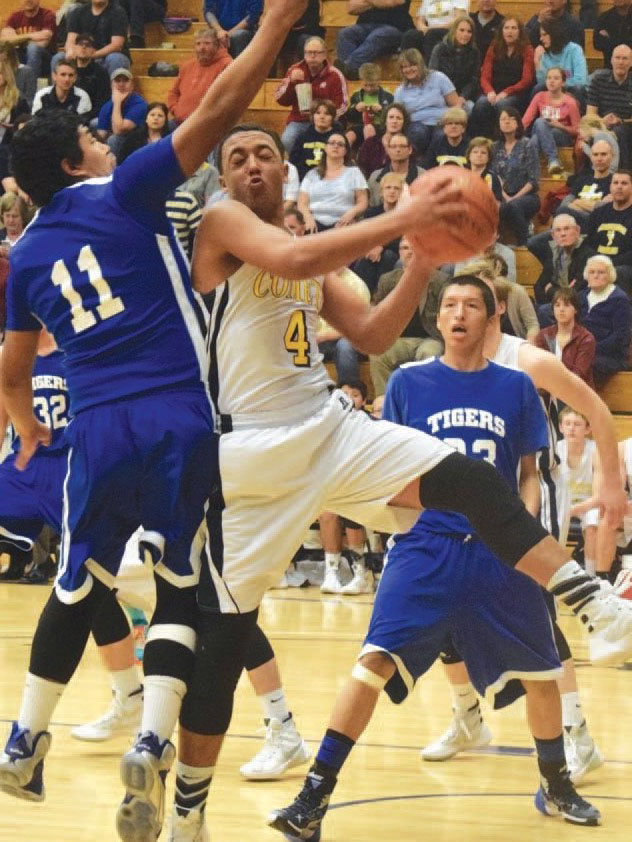 Reese Wallum (4) of Rapid City Christian snatches a rebound from Oelrich’s Dalton Crow (11). Adriano Brings Him Back stands at right.

RAPID CITY –– “We started out playing their game,” Oelrich’s Head Coach Dustin Twiss said of his team’s 62-41 loss to top seeded Rapid City Christian. “We got off to a sluggish start.”

Dalton Crow scored the first Tiger points on a free throw with only 2:48 remaining in the opening period, making the score 16-1, Rapid City. The first period ended, 22-2.

Christian’s game is simple, they hustle and harass nonstop, the main weapons in that strategy being 5-9 senior guard Paul McLaughlin and 5-11 junior forward Grady Criss. 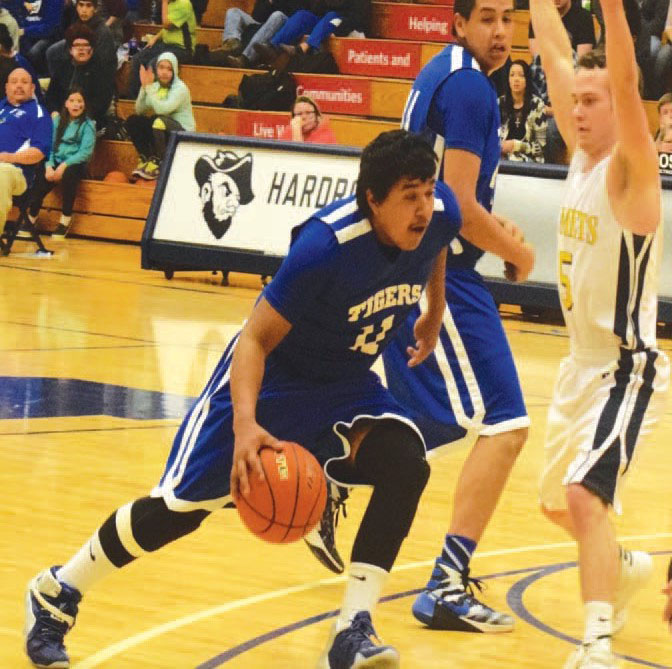 Comets Head Coach Kyle Courtney said of McLaughlin: “He only has one speed—go, go, go.” Courtney had his game plan, based on an earlier season defeat of Oelrich’s, but was surprised how well things turned out: “I really didn’t think our press was going to be that effective, but we were very active in our zone; I thought we did a great job.”

Crow scored the first bucket of the second period for Oelrichs, and then added a point from the free throw line, 22-5. He would pace the Tigers with 21 points. Courtney: “Crow is a very good basketball player.” Crow would score the last 4 points of the first half, and was the main reason his team outscored Rapid City 17-11 in the second period, but Oelrichs went into the locker room down 33-19.

“We got a little complacent in the second half,” Courtney said of his Comets. “Thankfully, we kinda kicked it into high gear in the fourth quarter.”

Halfway through the third quarter, Oelrichs got as close as they would in their comeback try, trailing Christian 37-26, but the Comets refocused, and ended the period up 45-28.

Big man Rudy Lone Elk was injured with 4:20 left in the game, and Christian ahead 51-39, and that seemed to take the remaining fight out of the Tigers. Criss cut loose with a barrage of offense for Rapid City, and when he finished the lead was up to twenty, 59-39.

One thing we always preach,” Courtney said after the game, “is team chemistry. There’s about eight guys that could really start for us.”

He expects the Region 7B championship game in Wall against District 13 champ White River to be a tough battle. Courtney: “Eldon Marshall is a great coach. They have won our region ten years in a row—that was not an accident. The goal for our program is to get to the point we can play with White River.”

Courtney realizes next year could be a rebuilding year since he is graduating so many starters, but “you kind of get your program to the point that tradition never graduates.”

Twiss said of Red Hair: “Leonard’s Mr. Steady, he comes into the game and gives us 100 percent every time. When we are in trouble we go to Leonard.”

Twiss is optimistic about next year: “We got a nice young corps of forwards coming up, and we’re looking to improve on our guards, bring the next generation of post players up. We’re still trying to build but we got a lot of young guys coming up.”

Earlier this season Oelrichs Head Coach Dustin Twiss said his boys “weren’t necessarily on the same page, didn’t play with 100 percent effort.” Not the case last Monday at the School of Mines King Center, as a total team effort turned back a game Wall Eagles team, 65-51, in the opening game of the District 14 tourney.

Twiss had a simple strategy for Wall: “We tried to tighten it down and play good team defense, pressure them, wear them out, and then go to the hoop.”

Any team that has a hustling, determined player like Wall’s Allan Mc- Donnell, a 6-2 junior forward, is going to be tough to tighten down.

“We usually pick a couple players,” Twiss said, “and try to be where they are on the court.” For this game Twiss selected McDonnell and Cass Lytle, a stout, 6-1 junior forward, weak off the dribble, but solid inside and capable of dropping a three. Although neither player had a bad game, 5-11 senior Rylee Schreiber stepped up his game and had 16 points and 8 rebounds,

Despite not being able to match Wall’s rebounding, the Tigers did what they do best, they took a lot of shots and made a lot of shots. Sophomore Louis Her Many Horses lead the Tigers with 14 points, Dalton Crow added 11. Lone Elk had 7 rebounds, and Red Hair had 6.

“They shot like 60 percent on us,” New Underwood Head Coach Rusty Lytle said of his 61-50 loss to Oelrichs in the second round of the District 14 tournament. Having defeated New Underwood by 17 earlier in the season, Oelrichs played with confidence, avoiding their usual slow start.

Overall the Class B Tigers finished the season 11-11 and made it to the District 14 championship game. Rapid City Christian will probably be in a rebuilding year in 2016-17, so Wall, New Underwood, Philip or Oelrichs could step up and win the district, but the Comets will put up a tough fight.