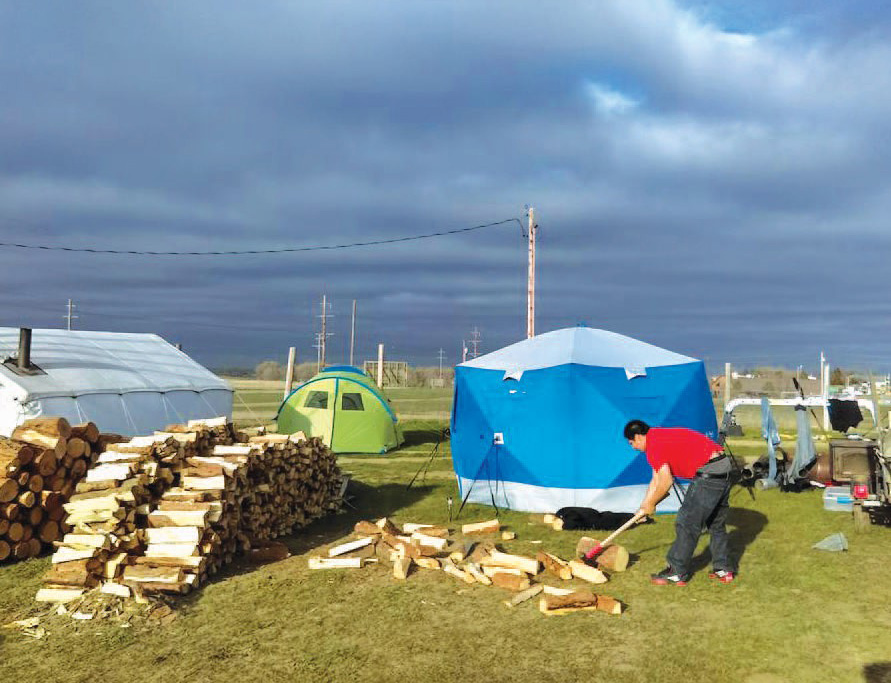 FT. YATES, N.D. –– As self-described water protectors carried the coals from the snuffed sacred fire at the former Oceti Sakowin Camp here on the banks of the Missouri River, their missions to the four directions spread pipeline resistance by means of a film festival, court actions, new prayer camps, and a redoubled bank divestment campaign.

A publicist for the event, Gillen said the unprecedented benefit “has been created to support the water protector movement” and to celebrate the talent of Native American filmmakers, music makers, youth and women of Standing Rock.

Mitchell Zephier, executive director and founder of the Standing Rock Nation Film & Music Festival, said the goal of the three-day weekend is to “empower, enlighten, and entertain the native community and all global citizens through film screenings, panels, and roundtable conversations.”

The agenda also offers a jam fest. Everything is at no cost to the public. However, with large crowds anticipated, participants are encouraged to register in advance online for guaranteed admission at www.standingrockfilmfest.c om. Donations are being accepted for the success of the venture co-founded by Standing Rock tribal member Phyllis Young.

Organizers bill it as a collaboration by and for the Oceti Sakowin, Seven Council Fires of the Great Sioux Nation and their water protector allies.

“As resistance to oil pipelines spreads across the country, today’s ruling is a victory for the right to protest pipeline construction and will also make it more difficult for pipeline companies to threaten or extract monetary damages against protesters,” the collective said in a written release.

The Oglala Sioux Tribe has joined the Standing Rock, Cheyenne River and Yankton Sioux tribes in the federal litigation of a consolidated case against the U.S. Army Corps of Engineers for permitting the Dakota Access Pipeline construction across the Missouri River a half mile upstream from a tribal drinking water intake.

On May 17, the companies behind the pipeline filed to intervene on behalf of the Corps against the Oglala Lakota Tribe’s claims that the permit violates the National Environmental Policy Act and the Mineral Leasing Act, as well as treaty and trust rights.

The line experienced a spill in North Dakota and a spill in South Dakota after oil was introduced into the pipe but before the target date for putting the private infrastructure into service June 1. Energy Transfer Partners and Sunoco Logistics Partners, which just merged, have had more than 320 reported pipeline incidents over the last 11 years.

The Iowa Supreme Court sided with nine Iowa landowners and the Sierra Club Iowa Chapter on May 16, rejecting Dakota Access Pipeline’s request to dismiss the landowners’ lawsuit alleging misuse of the doctrine of eminent domain to condemn their land for the route.

On May 9, Tara Houska, National Campaigns director of the non-profit Honor the Earth, announced the launch of a new, improved divestment campaign against the banks funding not only Dakota Access, but also the four tar-sands crude-oil pipelines currently proposed to carry fossil fuel out of Canada.

Speaking at Cannon Ball, North Dakota, she said a coalition of grassroots indigenous groups, together with 121 First Nations and tribes, have united in a Treaty Alliance Against Tar Sands Expansion with a decision to integrate divestment campaigning against all the pipelines.

Grand Chief Derek Nepinak of the Assembly of Manitoba Chiefs spoke on behalf of the Treaty Alliance Against Tar Sands Expansion: “We call on all banks and financial institutions to withdraw their investments in the corporations proposing to build new pipelines to carry even more tar-sands oil out of Canada,” he said.

“We call on individuals, businesses, organizations, and governments to withdraw their money from these financial institutions until they divest from these pipeline companies who are violating our rights, our treaties and our sovereignty,” he said.

“We stand in solidarity with the tribes of the Great Sioux Nation and all communities impacted by the Dakota Access Pipeline, and also call for divestment from any financial institution invested in Energy Transfer Partners.”

Grand Chief Serge Simon of the Mohawk Council of Kanesatake and participant in the Treaty Alliance Against Tar Sands Expansion opined: “We cannot allow Big Oil to divide us or weaken our resistance: Every one of these four tar sands pipelines needs to be stopped in order to stop the expansion of the Alberta tar sands. We stand united in the protection of our water, our communities, our climate, and our ways of life as First Peoples,” he said.

“Much of my community is under water right now due to historic flooding,” he added. “These are the climate fueled disasters that banks are funding by pumping money into these pipeline projects.”

The divestment campaign has created the Mazaska Talks website. Mazaska is Lakota for money. The site is “a centralized resource for this campaign, with detailed financial data as well as tools for taking action,” it claims.

BNP Paribas of France, as well as DNB of Norway and ING of the Netherlands, already have responded by selling their shares of loans for the Dakota Access Pipeline development.

“Divestment is the next stage in the fight against the black snake that has come to poison our lands,” said Matt Remle of Last Real Indians, a leader of the coalition that successfully pushed the City of Seattle to divest over $3 billion from DAPL banks earlier this year.

“Big oil and their financial backers are not persuaded by moral and environmental arguments, so it is time to hit them in the pocket book. The resistance at Standing Rock changed the world. Indigenous nations are rising up to create a future with clean water and respect for human rights.”

So far, the divestment movement launched during the resistance at Standing Rock has withdrawn more than $5 billion from DAPLfunding banks, including the money from Seattle in the state of Washington, and the California cities of Davis and Santa Monica, as well as over $80 million in individual accounts.

“Many of these banks already have human rights directives in place and all should have policies respecting indigenous communities. Houska said. “Financiers should follow their own rules. Passing the blame onto companies committing atrocities and a federal government willing to overrun its citizens’ rights for profit is unacceptable.

“We are consumers; we have agency, and we have a say in how our money is invested.” she added. Houska recently traveled to Norway and Switzerland as part of an indigenous women’s delegation that met with several banks and Norway’s oil fund.

The remaining targeted banks also are backing the new expansion of the DAPL system into the Bayou Bridge Pipeline in Louisiana, as well as the four proposed tarsands pipelines that together would dispense some 3 million barrels a day of the world’s dirtiest oil.

A draft environmental impact statement (DEIS) came out on May 15 for the Enbridge Corp.’s proposed Line 3 project.

The DEIS announcement initiated a public comment period that runs through July 10, on the plan to build the new oil pipeline in Minnesota to replace the existing Line 3. This line serves the Alberta Canada tar sands located in Dene and Cree territories.

The old Line 3, which runs through Leech Lake and Fond du Lac reservations, would be permanently deactivated and remain in place, according to plans.

Enbridge states that the purpose of the project is to address pipeline integrity and safety concerns related to the operating Line 3 and to restore flow to the original line’s capacity.

Line 3 resisters say that an Enbridge oil pipeline spill in Minnesota on March 3, 1991, was even larger than the company’s spill into Michigan’s Kalamazoo River in 2010, which has been deemed the largest inland oil spill in U.S. history.

On May 16, a Kalamazoo County Commission vote made it the 60th Michigan governmental body to call for shutdown of the Line 5, which caused the spill. Opponents of the line fear it will rupture again in the Straits of Mackinac in the Great Lakes at the head of the Mississippi River.

In the Minnesota incident, Line 3 pipe ruptured near Grand Rapids, spewing over 1.7 million gallons of oil, much of which flowed into the Prairie River, a tributary to the Mississippi. Were it not for an 18-inch ice pack on the river, the spill could have poisoned the drinking water of millions downstream “and would likely be remembered very differently,” they said.

The new campaign to defund the tar-sands pipelines coincides with a time of unprecedented economic vulnerability in the tar-sands industry, marked by consistently low oil prices and an extremely high cost of extraction. Major oil companies have been withdrawing from the tar sands steadily over the past two years.

On May 19, Communities United for a Just Transition held a webinar called Divest to Reinvest. Capping off a Global Divestment Week, the free public training sessions promoted the idea of moving beyond pipeline resistance to “clean energy resilience.”

“We can’t stop with divestment. It’s critical to move capital into indigenous, black, immigrant, and working class communities on the frontlines of the extractive economy. Capital must be put to use to build transformative local living economies under the governance of communities themselves rather than destructive financiers far from the impact of financial decisions.”

The webinar covered models for reinvestment campaigns in cities and universities, tools for individuals to move their money, building alternative institutions for banking and credit, local loan funds and financial cooperatives, as well as resources for individuals and campaigns to move capital.

The session featured experts in challenging the extractive economy and shifting to an economy that is ecologically sustainable, equitable and just: Marnie Thompson, co-managing director of the Fund for Democratic Communities, Deyanira del Rio, is co-director of New Economy Project and Board Chair of the Lower East Side People’s Federal Credit Union, Michelle Mascarenhas-Swan, a collective staff member of the Movement Generation Justice & Ecology Project, Jamie Trinkle, senior campaign and research coordinator of Enlace, and Vanessa Green, Campaign Director of DivestInvest Individual.

However, a statement signed by Tribal Business Council Chair Harry Barnes on May 18, distances the elected body from the development that is a response to TransCanada’s proposed Keystone XL Pipeline.

“They do have the right to gather and express their concerns and opinions, but hopefully this is done peacefully and in a respectful manner,” it concludes.

At the other end of the proposed Keystone XL Pipeline, in Nebraska, pipeline fighters invited people to submit comments to the Public Service Commission, which is debating whether to give the project a green light to build through the state.

Montana and South Dakota state governments have permitted the project. But tribes and non-profits are suing at both the federal and state level to prevent it.