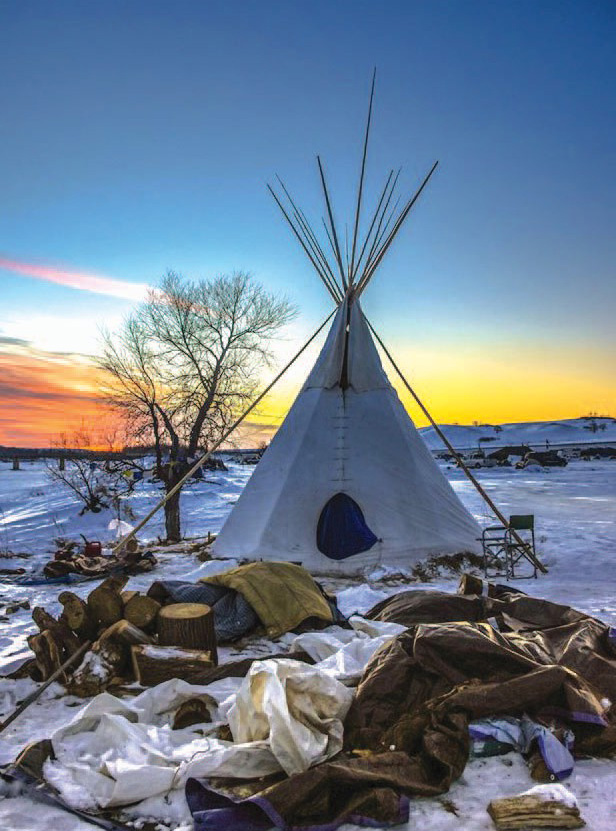 Members of the Oceti Sakowin spirit camp, which has supported pipeline resistance on land under Corps of Engineers jurisdiction, are folding their tents to move onto higher ground in the wake of analysis showing that thaws of heavier-than-usual winter snows would most likely flood the site.

WASHINGTON, D.C. –– In the tribal lawsuit to halt construction of the Dakota Access Pipeline, the U.S. Justice Department on Jan. 6 filed for dismissal of Energy Transfer Partners’ argument that the Army Corps of Engineers gave permission to build across the Missouri River.

The oil pipeline company had made the argument in a cross-claim in the case on Dec. 5, which called for summary judgement that would allow it to proceed with the plan to put the line under the Oahe Reservoir a half-mile upstream from the Standing Rock Sioux Tribe’s main drinking water intake.

“Dakota Access’s inability to establish that the decision-making process was completed – including a statutorily-mandated submission of a formal notice to Congress of the Army’s intent to grant an easement – is fatal to its cross-claim,” federal government lawyers said in the most recent development in the lawsuit.

The Standing Rock Sioux Tribe and the Cheyenne River Sioux Tribe are litigating the suit against the Army Corps of Engineers in the U.S. District Court of the federal District of Columbia to require more consultation over historic preservation and water protection before a decision is granted on an easement.

Some 200 tribal governments and hundreds of agencies, local governments and non-governmental organizations that warn of oil spills have demanded the Army carry out an environmental impact statement (EIS) in order to make the decision.

On the day that the Justice Department filed for dismissal of Energy Transfer Partners’ claim the Standing Rock Sioux Tribe issued its latest call for public pressure to launch the EIS.

“The Corps has neglected to log its intent to conduct an Environmental Impact Statement. We’re asking you to call on the Army Corps to demand that they formally register the EIS. Time is running out, and we urgently need your help,” the tribe said.

“With a new administration coming to Washington, the time is NOW to ensure a full EIS is conducted,” it said in writing.

Trump’s nominee to head the U.S. Department of Energy, former Texas Gov. Rick Perry, was on the company’s board of directors and on the board of its wholly-owned subsidiary Sunoco Logistics partners, until Dec. 31, according to its Securities Exchange Commission filings.

If the venture receives Army approval it can proceed to move oil from the Bakken Formation centered on the Ft. Berthold Indian Reservation across unceded 1851 Ft. Laramie treaty lands in North and South Dakota through Iowa to Illinois. There it would meet another line the same companies are building.

They claim DAPL would distribute oil to “major refining markets in a more direct, cost-effective, safer and environmentally responsible manner.” It would substitute rail and truck transportation of the fossil fuel to Sunoco Logistics Partners refineries in Texas and Gulf Coast export facilities.

Fingered for upwards of 200 leaks since 2010, Sunoco Logistics Partners has spilled crude oil more than any of its competitors.

While the permit is suspended, $1.4 billion of bank loans are on hold, and pipeline opponents are rallying at bank offices worldwide behind a call for individuals to withdraw their money from accounts and a petition for bankers to cut their line of credit to the companies.

Members of the Oceti Sakowin spirit camp, which has supported pipeline resistance on land under Corps of Engineers jurisdiction, are folding their tents to move onto higher ground in the wake of analysis showing that thaws of heavier-than-usual winter snows would most likely flood the site, according to camp media assistant Redhawk.

The Morton County Sheriff’s Department said 571 resisters have been arrested since North Dakota Gov. Jack Dalrymple declared a state of emergency in August, making more than $17 million available for law enforcement and National Guard, which are still on the scene in the new gubernatorial term of Doug Burgum.

“Make no mistake, this infrastructure is good for our economy,” he said as soon as he took office.