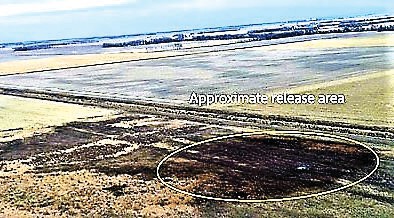 Land soaked with hazardous waste from the largest Keystone 1 Pipeline oil spill in history is located adjacent to a drainage ditch that carries runoff water to the James River, a tributary of the Missouri, but operators say, “There have been no significant concerns.” 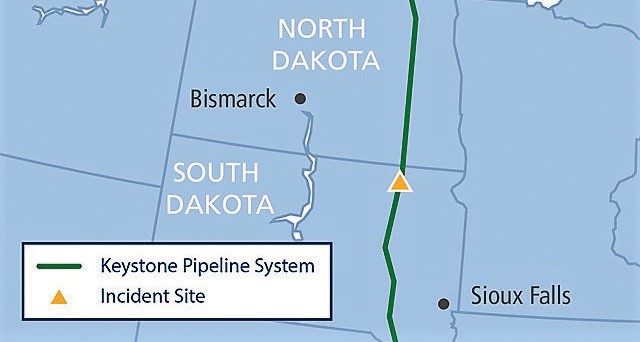 The ongoing incident came to light as Nebraska officials readied for a Nov. 20 vote on the parent company’s permit application for a second such line.

Noting that the toxic leak is “within miles of the Lake Traverse Sioux, our sister tribe,” Frazier commented, “This was the third pipeline spill in the state of South Dakota this year alone.

“I condemn this oil spill, the company that built this pipeline and anybody associated with it,” he said in a written declaration.

The Canadian company notified South Dakota officials of the spill near Britton, some 40 miles northeast of Aberdeen, on Nov. 17. By the afternoon of Nov. 19, the company said it had doubled the number of people on clean-up detail, from 75 to 150.

TransCanada Corp. shut down the pipeline, which runs across more than 1,000 miles from Canada through all the easternmost counties of North and South Dakota, as well as through Nebraska, Kansas, Missouri and Illinois.

The company calculates a need to reclaim some 210,000 gallons of dilbit, or diluted bitumen, which is the tarsands oil combined with the thinners to make it flow.

That is just about enough toxic fluid to fill an Olympic swimming pool halfway to its standard 6-foot depth. Untold tons of soil also must be removed to a hazardous waste disposal site.

“We do not have an estimate of how long the cleanup will take but we will remain on-site until the land is cleaned up and reclaimed back to its original state and the landowner and regulators are satisfied with the work,” the company said in a written statement.

The company did not respond to a Native Sun News Today request for an update.

In the previous Keystone 1 Pipeline oil spill, a crew of 100 did not find the cause for a week. It turned out to be a rupture. That occurred near Freeman, in April 2016.

TransCanada Corp. initially said 187 gallons of poisonous brew permeated the farmland as a result of the accident in that southeastern South Dakota community, but it later revealed a 16,800-gallon spill, the largest on the line up to that point.

The line had more than a dozen leaks in 2011, the first year after it started carrying dilbit from Canada across the U.S. heartland.

Volunteer firefighters and sheriff’s deputies from the Marshall County seat of Britton were among first responders who collaborated with TransCanada Corp. employees in closing public access to the area of the latest spill.

The company is calling this the Amherst Incident because the closest community on the map is Amherst, population 88, about four miles southwest of Britton.

Sisseton Wahpeton Oyate Tribal Chair Dave Flute said the tribe headquartered at Lake Traverse Reservation about 20 miles east of the spill is not sure how much petroleum product will leak into the soil from the underground pipe and wants to know how this happened.

“I think that should be a concern of everybody up and down the pipeline, regardless of where it’s running through,” Flute said, adding, “As a treaty tribe, these lands hold a lot of historical and cultural value to the Sisseton Wahpeton Sioux Tribe and a lot of other Dakota tribes that are up and down the Mississippi and Missouri rivers.”

But, he said, “We’re just appreciative that TransCanada and the local county here have recognized that there may be historical artifacts that have a lot of value to the tribe and that our Tribal Historic Preservation Officer would be notified if there were any disturbances of graves or burial mounds or any type of American Indian artifacts.”

A longtime former rural water board member, Marks said, “We have a lot of shallow aquifers everybody utilizes” for private wells and the Brown, Day, Marshall Rural Water System, which draws on the James Aquifer close to the pipeline spill.

“If oil gets into that aquifer, it’s going to immediately spread throughout the reservation,” he told Waniya Locke in an interview for Indigenous Rising Media. “It’s not only this break here, but one of the other fights we have is with the Keystone XL,” he said.

Noting that the proposed second TransCanada Corp. line through unceded 1868 Ft. Laramie Treaty would cross other rural delivery systems that carry Missouri River water, he added, “We’re not fighting this water thing for our tribe or Dakota people. If the Missouri River is contaminated by one of those breaks, we’re afraid it’s going to harm everybody on a rural water system.”

The Nebraska Public Service Commission was supposed to decide on a permit for the Keystone XL on Nov. 20. The South Dakota Public Utilities’ permit is being appealed to the state Supreme Court by tribes and the statewide grassroots non-profit Dakota Rural Action. The rest of the state and federal permits are in place.

Former U.S. President Barack Obama had denied the federal permit on the grounds that the project is not in the national interest, but successor President Donald Trump reversed the decision, as he promised in his campaign. His move that has fended off two lawsuits against the United States by the foreign company.

The Amherst Incident “should be a clear warning against” Nebraska approval, Dakota Rural Action said in a news release. “The SD PUC ignored landowner and experts’ concerns about construction practices used on Keystone 1 and approved the Keystone XL in S.D. We urge the Nebraska PSC to take a different path.

“Conditions have changed in this country since this pipeline was built and Keystone XL was first proposed. Demand for fossil fuels is dropping as renewable energy technologies become more affordable and efficient. Keystone XL is not in the public interest,” Dakota Rural Action proclaimed.

“Serious scrutiny must be leveled upon TransCanada before they are allowed to once again operate the Keystone 1 Pipeline,” it said, adding that it’s “members grieve for the environment, the landowners, and community after a spill of this magnitude. To see destruction on land you steward is always devastating.”

The organization is the fiscal sponsor for Wiconi Un Tipi spirit camp located on Lower Brule Sioux Reservation to thwart construction of an electrical transmission line slated to feed a pumping station for the proposed Keystone XL.

Dakota Rural Action member Kent Moeckly, whose property is on the Keystone 1 Pipeline one mile north of the current oil leak, said he doubts the stain is the size that TransCanada Corp. personnel say it is. “You know they’re lying when their lips are moving,” he told the Native Sun News Today.

“Our thinking is this has probably been leaking a long time. Thousands and thousands of gallons could seep out without them even knowing about it,” he said. “It’s gonna be an incredible disaster, before this is over.”

Moeckly couldn’t see the damage, due to a blockade established by safety crews, but he could smell the fumes that he described as ‘horrible strong, strong” and he suspected the presence of carcinogenic gases as benzene and toluene that accompany dilbit, he said.

The pipeline route in this area is along Crow Creek drain, an artificial channel for runoff from rain and snowmelt on the hills of the nearby Prairie Coteau lake country. The ditch is one of many that carries water through the flat lowlands where Moeckly’s soy and corn grow, into the James River, a tributary of the Missouri.

Since European settlers arrived in the “prairie potholes” landscape of northeastern South Dakota, farmers have built channels in order to keep the land dry enough to farm.

Moeckly said little gravel roads serving the farms are being overrun by heavy vehicles involved in extracting the contaminated materials from the pipeline break. “There are pickups, flatbeds, side-dumps. It’s an absolute zoo,” he said.

“The safety of the public and environment are our top priorities,” it claimed. “Specialists continue to affirm the incident is being controlled and there is no threat to public safety. There have been no significant concerns.”

Moeckly disagreed. He said the line was hastily and sloppily built. He blamed corruption and a lack of government oversight for the problems. “It’s disappointing, and I’m not so sure it’s not criminal,” he said. “We can’t let these greedy special interests come in and mess things up,” he added. “We all breathe the same air, drink the same water, eat grain from the same ground.

“We pay for it. Mother Nature pays for it. Our good earth pays for it big time.”

Tribal Chair Frazier took the argument a step further. “Over and over, the states, the United States, the courts, and, of course, the oil companies have mocked our fear that these pipelines might fail and befoul our sacred lands and resources,” he said.

“They tell us, ‘Don’t worry, our pipelines are safe.’ But we know the truth. My people learned long ago not to trust such promises, especially promises made by rich men who get even richer from exploiting our natural resources and the politicians whose careers and campaign chests rely on that crude, immoral oil money.

“This Keystone spill is proof positive that those nice words are lies. When the Trump Administration says this pipeline is safe, it is lying. When TransCanada says the safety of the public and the environment is its top priority, it is lying.

“They are lying to the Indian people, which is no surprise. But they are lying to the rest of America, too. This is your water, your land, and your planet too. And your government is lying to your face, endangering your future, and doing it to make a few wealthy people wealthier still.

“The Cheyenne River Sioux Tribe condemns this spill, this pipeline, the KXL, the DAPL, and all pipelines that threaten our Grandmother Earth.”

DAPL is the Dakota Access Pipeline, recently built across unceded treaty territory, and opposed by a native grassroots-led global resistance that experienced a 2016 militarized police clampdown, as well as a lawsuit in federal court that is being brought by Cheyenne River, Standing Rock and Yankton Sioux tribes.