Opening the Arctic to oil exploration threatens way of life 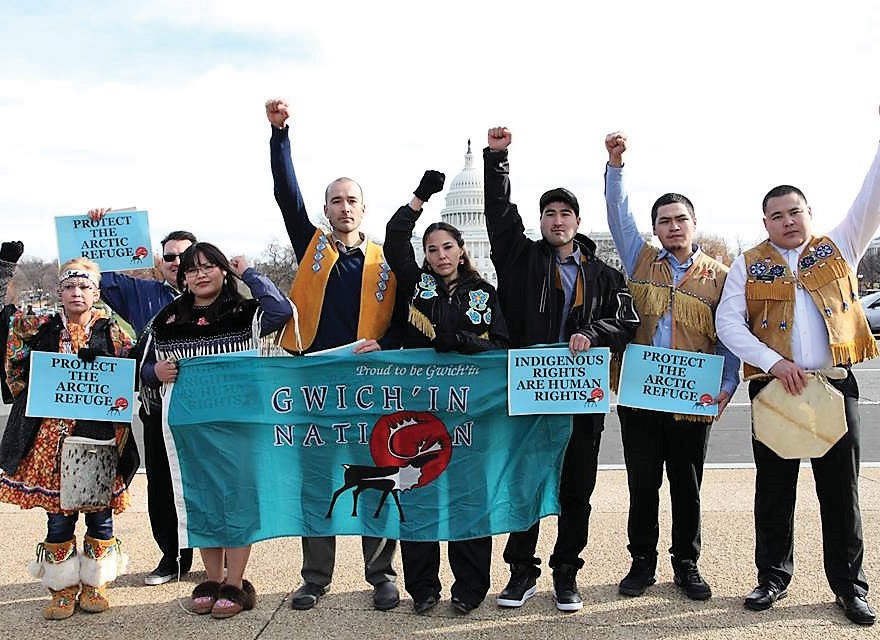 Leaders of the Gwich’in Nation and Inupiaq Tribe, who traveled to the U.S. Capitol from northern Alaska and the Yukon Territory in Canada, led a “pray-in” on Dec. 6, urging Congress to drop Arctic oil drilling from the federal tax bill.

WASHINGTON — Leaders of the Gwich’in Nation and Inupiaq Tribe, who traveled here from northern Alaska and the Yukon Territory in Canada, led a “pray-in” on Dec. 6, urging the U.S Congress to drop Arctic oil drilling from the federal tax bill.

The event coincided with the 57th anniversary of the creation of the Arctic National Wildlife Refuge and with the federal Bureau of Land Management’s annual lease offering in the National Petroleum Reserve- Alaska, located 100 miles west of the refuge.

The refuge and the reserve surround Gwich’in and Inupiaq territories where communities claim 40,000 years of civilization based on migrating with caribou, hunting, fishing and gathering for subsistence.

“I’m a hunter living a subsistence life in the Yukon, a life that was passed on to me by my parents and generations of family,” said Jeffrey Peter, Vuntut Gwich’in from the Yukon Territory. “I’m going to be a father soon, and I deserve the right to pass this life on to my son,” he said.

“The people of the Gwich’in Nation of Alaska and Canada have always subsisted on the Porcupine Caribou herd, whose calving grounds are in the coastal plain of the Arctic National Wildlife Refuge, his delegation said in a media release.

“Congress has no right to take that away from us,” Peter told a crowd gathered outside the U.S. Capitol. “We cannot allow drilling in the Arctic Refuge.”

“We are outside the capitol today to assert our tribal sovereignty and indigenous identities, affirm our commitment to protecting sacred places and demand Congress do the same,” said Bernadette Demientieff, executive director of the Gwich’in Steering Committee.

The committee formed in 1988 in response to proposals to drill for oil in the refuge, which covers the coastal plain that members know in their language as the Sacred Place Where Life Begins.

“The Inupiaq people do not want this drilling, we do not want to open the Arctic Refuge to drilling,” said Adrienne Titus, an Inupiaq leader who works with the University of Alaska Native Studies and Rural Development program. “I traveled here from Alaska because we need to stop Congress from allowing this to pass.”

Sebi Medina-Tayac of the Piscataway Nation, in whose territory Washington, D.C. is located, welcomed the group and spoke of connecting struggles for indigenous rights. His nation is fighting a pipeline across the Potomac River, he said.

Dallas Goldtooth, Keep It in the Ground campaigner for the Indigenous Environmental Network, who served as master of ceremonies, said 95 percent of the Arctic Slope is already open for oil development. “We have to stop the other 5 percent.

“The tax bill being debated is bad across the board, but it especially highlights the ugly collusion between fossil fuel interests and the GOP,” said Goldtooth, a Dakota-Diné. “We must resist the fossil fuel industry’s continued attacks on indigenous rights and sovereignty. We must draw the line on the protection of our indigenous homelands; we must defend the sacred.”

This year’s oil lease offer, in Alaska’s western Arctic area, was the largest in reserve history with more than 10 million acres on the block. Occurring simultaneously with tax bill approval process, it prompted the Alaska Wilderness League to lambast both U.S President Donald Trump and the GOP-dominated Congress.

“The Trump Administration and Republican leaders are making a full-court press to open every single acre of America’s Arctic Coast to oil and gas development,” the league’s Conservation Director Kristen Miller said in a written statement.

“The Arctic National Wildlife Refuge and offshore drilling in the Arctic Ocean are highly controversial,” she said. “The all-out push for development in the National Petroleum Reserve-Alaska deserves every bit as much attention.”

The Administration offered 900 tracts and more than 10 million acres in the reserve. Seven tracts were leased at $14.99 per acre, indicating weak interest, the league noted.

However, Miller had a different point to make. “At that price, leasing the entirety of the Arctic Refuge Coastal Plain’s 1.5 million acres would raise slightly more than $11 million in revenue for the federal government, a far cry from the billion-dollar lie that Trump and Republicans are feeding the American public,” she said.

“Our public lands are worth more than that,” she argued. “The reserve is not an oilfield,” she continued. “It is an Indiana-sized tract of largely undeveloped land teeming with migratory birds, brown bears, caribou, threatened polar bears, walrus, endangered beluga whales and more. The American people do not want the entirety of the Arctic coast turned over for wholesale oil and gas drilling.”

Protecting the wildlife is tantamount to protecting native human rights, Demientieff said in making a tobacco offering. “We are not asking for anything,” she said. “We want to continue to have healthy land and wildlife. We just want to continue our way of life.”