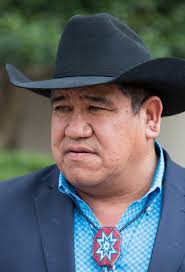 The resolution states that in 1944 tribal leaders from the Great Plains Region contributed to the creation and foundation of the National Congress of American Indians in 1944.

“It is essential that the current leaders of NCAI understand the foundation and purpose upon which the NCAI was founded and continue to advocate for the Indian tribes and nations throughout the United States,” proclaims the resolution.

The resolution details the numerous challenges that tribes face in Indian Country, including the need for meaningful consultation and protection of the environment and natural resources. In the resolution the Oglala Sioux Tribal Council refer to Chairman Frazier’s well-documented fight against the Keystone Pipeline and the Dakota Access Pipeline.

“Chairman Frazier was chosen by the Akicita (warriors) of several tribes and an eagle-feather headdress was placed upon him in gratitude and respect for standing up for the people and for exercising leadership,” the resolution declares.

“Chairman Frazier has proven leadership and willingness to advocate for all our people and be a strong voice for sovereignty, treaty rights, the health, safety, and welfare of Indian Country. He has proven ability to stand up to the federal government and the forces that seek to limit tribal sovereignty and self-sufficiency,” states the resolution.

The resolution unanimously passed 18-0-0. The election of officers for the National Congress of American Indians will take place in Milwaukee, WI during NCAI’s annual convention, which will be held from October 15th-20th.