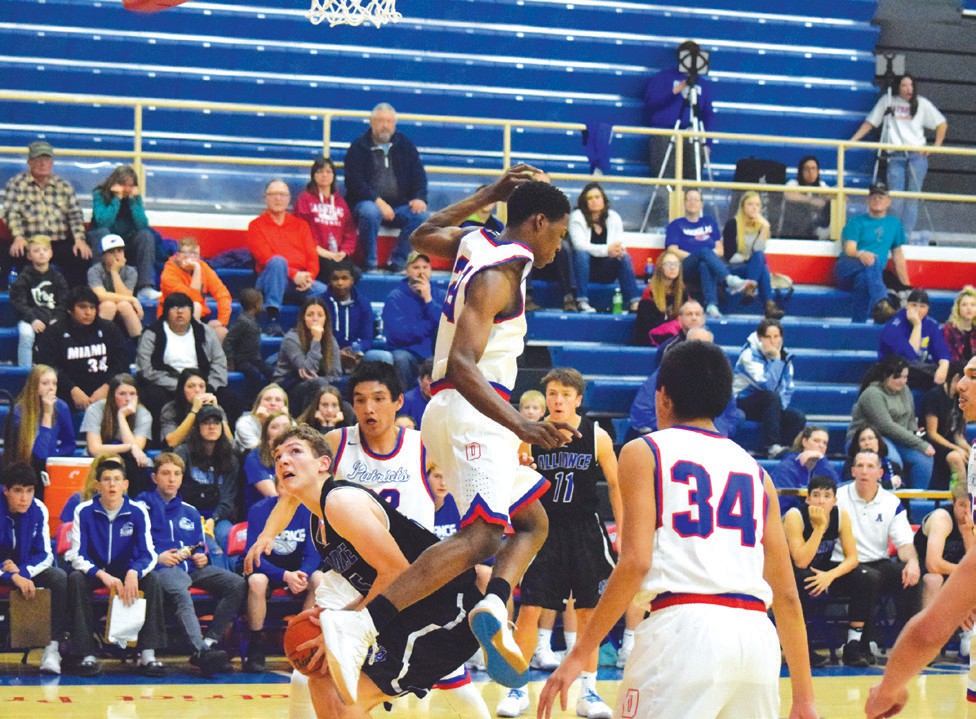 BOX ELDER — “It was all about defense tonight,” Douglas junior shooting guard Dylan Pourier said after his team’s 76-43 shellacking of over-matched Alliance, Nebraska. “Our defense was really good.”

Head Coach Travis Miller added, “Our defense can stay really fresh because we are so deep.”

Miller said you could sit down his starting five, bring in the relief five, “and there’s really not much of a drop off. The boys have worked hard. We played a lot of games this summer, bunch of guys who are gym rats. It’s a tribute to them.” 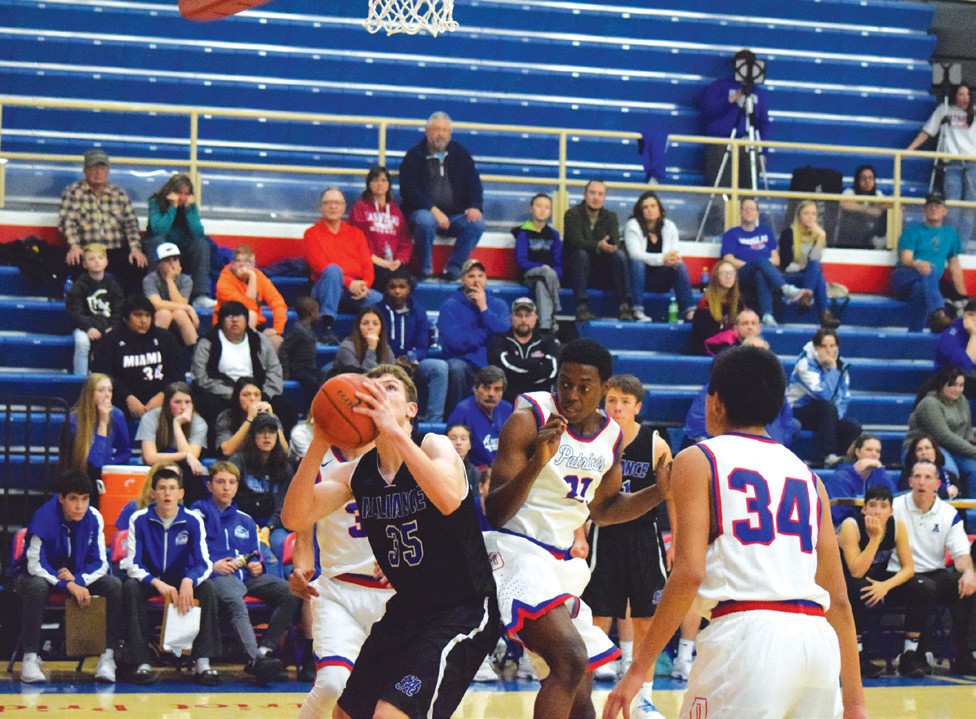 Pourier concurs: “I think we grew as a team over the summer and we’ve gelled together. We hold each other accountable.”

Last year, Alliance beat the Patriots by 14, (“They had some studs,” Miller explained), but weakened by graduation, the Bulldogs found out what happens when you face the same Patriot squad, but a year older, and with one powerful addition—6-4 power forward, Darius Dawson.

Pourier had high praise for his new teammate, and explained what he brings to the court: “Defensive presence, a big body, he’s got moves under the rim.” 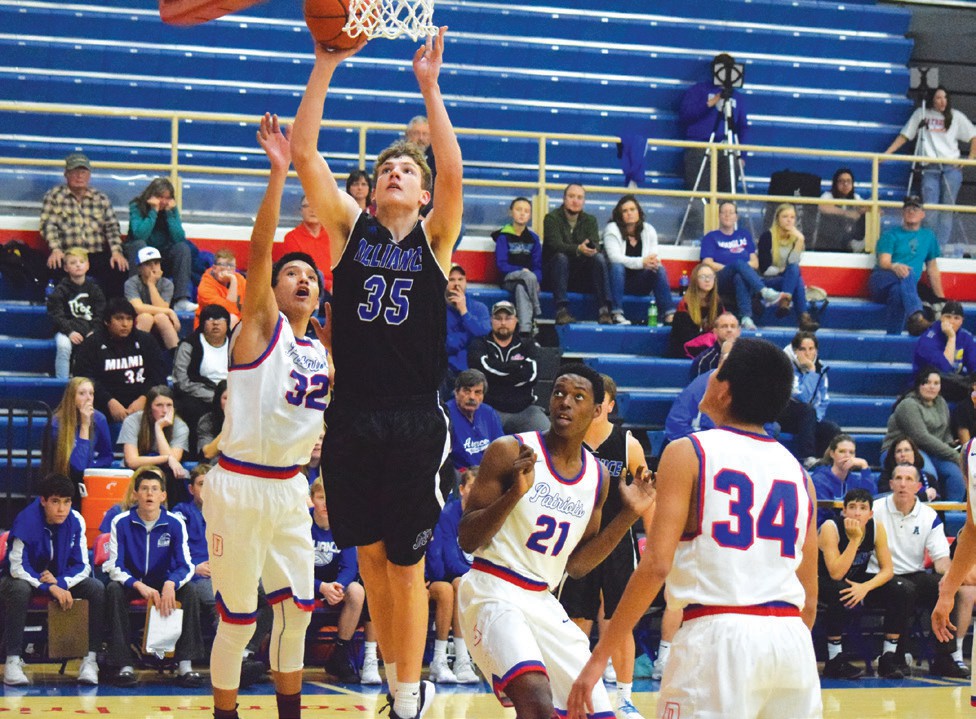 Pourier is clearly bigger and stronger than a year ago, and he came out aggressive and confident, stepping back just behind the arc for a three, but his toe touched the line and it resulted in a two, as Douglas drew first blood. Alliance responded immediately, sophomore shooting guard, Joel Baker, launching what looked like a wish and a prayer three, but caught nothing but net. Alliance up, 3-2. Baker is listed at 5-10, but it must be his bushy hair because he is lucky to be 5-8. His unorthodox shooting motion seems sure to miss, but he is a dangerous long-range threat.

Looking much smaller, skinnier and younger than the Patriots, the Bulldogs from Alliance nonetheless played them tough, point for point, until the 2:40 mark of the first quarter, the score tied up, 9-9. At this point Douglas was straining hard on their leash, set to take off and steam roll the Bulldogs, but the ref didn’t know that. He blew a traveling whistle on a slick fast break spin move to the basket by Joseph Hannah, a 6-3 senior, which can charitably be called questionable. But not to be discouraged, the Patriots got the ball back quickly, and Cetan Big Crow buried a three to give Douglas a 12-9 lead, and they never looked back.

They went into the halftime locker room up 34-25.

The third quarter would prove an absolute disaster for Alliance as they didn’t score until there was only 2:18 remaining, and by then it was 51-27.

“They just couldn’t get around our defense anymore,” Miller said.

Unlike last year, the Patriots showed they could close out an opponent they have down. “I preached that all summer,” Miller said, “to come out, and have that killer instinct, and put that other team away. Don’t give them a glimmer (of hope).”

Focus now is on St Thomas

More, who came to Box Elder Tuesday night, outcome of that contest not known at this time. The Patriots have struggled against More in the past, and last year was no exception. But they were close, and the addition of Dawson, with his defense and slick moves in the paint, could spell the difference, particularly since graduation hit the Cavaliers hard and they lost badly to Sioux Falls Washington last Saturday night, 60-33.

This game will give telltale indication where Douglas is in relation to last year’s version. This Friday, they travel to Sturgis to battle a fierce rival, they went 1-2 against last season. Like the Patriots, the Scoopers returned all their starters. Given all the Lakota players on Douglas, it will be interesting to see how the fans in Sturgis on the heels of the racial incident with Pine Ridge in football.

There was already some serious issue with lop sided officiating favoring the Scoopers, to the tune of 19 extra points, in the first game last year, which Douglas barely hung on to win. Lop sided officiating was also a factor in the losses to More. Strangely enough, the players on Douglas stop fouling opponents like crazy when they are out of state teams like Alliance. Wonder why that is…