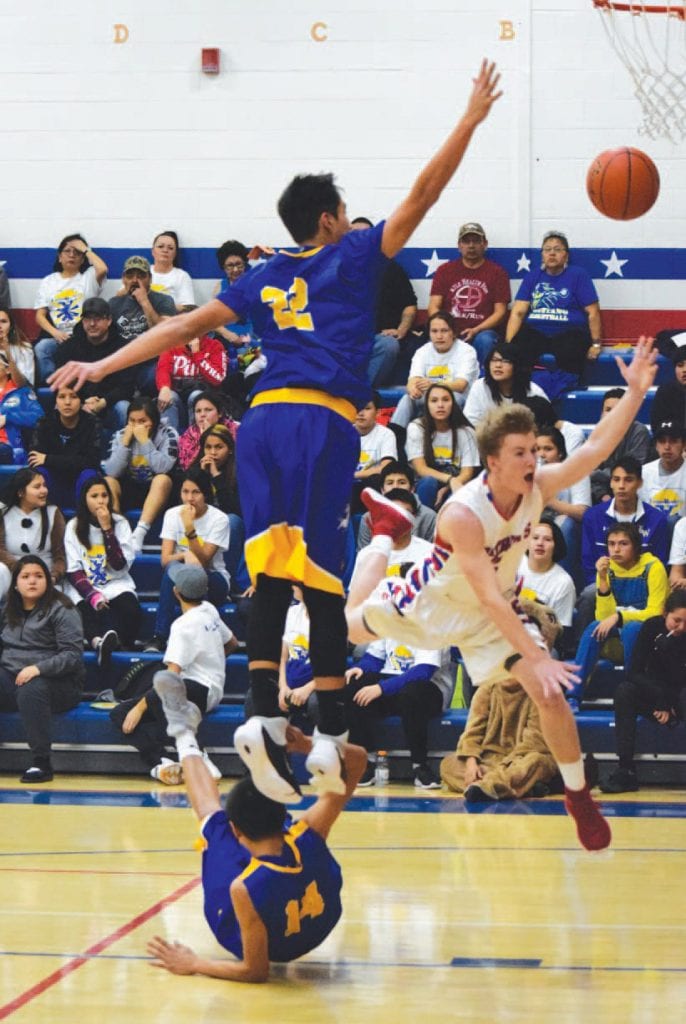 BOX ELDER –– Douglas drew first blood, 4-0, lost the lead at the end of the first quarter, and then took charge from there on out, posting an impressive 65-54 win over an always dangerous Little Wound, in boys Friday night basketball action.

“I hope we’ve turned the corner,” Patriots Head Coach Travis Miller said. “We’ve had some frustrating losses. One thing about our school, we haven’t played many cupcakes. Hopefully this makes us tougher down the road. Iron sharpens iron.”

Little Wound showed up ranks depleted, missing Ty Apple and Ethan Running Shield. Head Coach Jay Jacobs didn’t dwell on excuses: “We just came out flat, and it kind of threw everybody off.”

Flat play from Little Wound is still some very good basketball, they certainly didn’t roll over and play dead for a team they seriously walloped last year down in Kyle. Jacobs called timeout with a couple minutes left in the opening quarter and was able to get his charges focused enough to end that first quarter having taken the lead, 12-11.

Douglas showed they were far from finished by coming out aggressively,

Morton driving into the paint for two, 13-12, and then Pourier driving the baseline for another bucket, 15-12. Little Wound has an explosive forward in 6-3 senior Robert Shangreaux, and he came back with some twisting moves through traffic to make it, 15-14, Douglas.

Sorenson stands only 5-9, but he is intensely focused on every play, and gives Douglas a lot of hustle and effort at guard. His threepointer put Douglas up, 18-14, with 4:43 left first half. Little Wound called timeout.

Once back on the floor, Morton got the ball, hit a three, and Douglas led 21-14. Little Wound turned the ball over, and Sorenson came back with yet another three, 24-14. Tex Janis, Little Wound’s 6-6 sophomore center, closed the gap to 24-16, and then Miller called a timeout for Douglas, 2:36 left in the half.

Whatever they discussed, Big Crow immediately applied it, feeding the ball to Jones, a 6-4 junior, who gave Douglas a ten-point lead, 26-16. Little Wound was frustrated, and a turnover resulted. Douglas took a bad shot down at the other end, but Sam Hand, a 6-0 junior, snatched the rebound for an up-and-in, 28-16, Douglas.

Janis was formidable, if he could get position in the paint, and he made it 28-18, but Hannah, a 6-3 junior center, may have had the best play of the night, to put the Patriots back up by a dozen, 30-18. Douglas was bristling with confidence. Big Crow got the ball back and threaded an extremely long assist to Sam Hand, 32-18. The half ended, 34-18.

Little Wound was able to fight back to cut the lead to 10, 43-33 before calling a timeout with 2:05 remaining in the third quarter. Little Wound came back determined to make their move. Michael Brave drove into the lane, to cut the lead to 43-35. Dawson Gourd stripped Sam Hand at midcourt and made it 43- 37. He was fouled, made the free throw, 43-38.

At this point came the huge momentum killer. Big Crow forced a foul from Riley Cross, a 6-3 sophomore, with forty seconds remaining in the third, and angry at his play, Cross audibly cursed on his way off the court. A technical was called.

It took five minutes for Little Wound to finally cut into the double digit lead, closing the score to 58-50 when Brave scored on a hard drive. Ethan Jealous-Mills, a 6-1 senior forward, fouled Morton and Morton hit his free throws again, 60-50, and Little Wound called timeout with two minutes remaining in the game.

Back on the floor, Shangreaux was called for grabbing the arm of Dan Hand, and Hand made his free throws, 62-50. All the Mustangs could do from there on out was foul and hope free throws were missed, they mostly weren’t, and Douglas had earned a 65-54 victory.

The game stats were surprisingly even, but one glaring difference stood out: Douglas was 18 for 24 from the free throw line, Little Wound was 4 for 8. That, in a nutshell, was the difference in the game.

Morton and Dan Hand led the team with 14 points. Sam Hand pitched in 12 points. Morton also had 8 assists and 6 rebounds. Dan Hand had 9 rebounds and Sam Hand had 6.

Janis led all scorers with 18 points. He had 7 rebounds. Brave had 9 points and 5 rebounds. Shangreaux had 6 rebounds.