Douglas avenges one of two losses last season to Spearfish 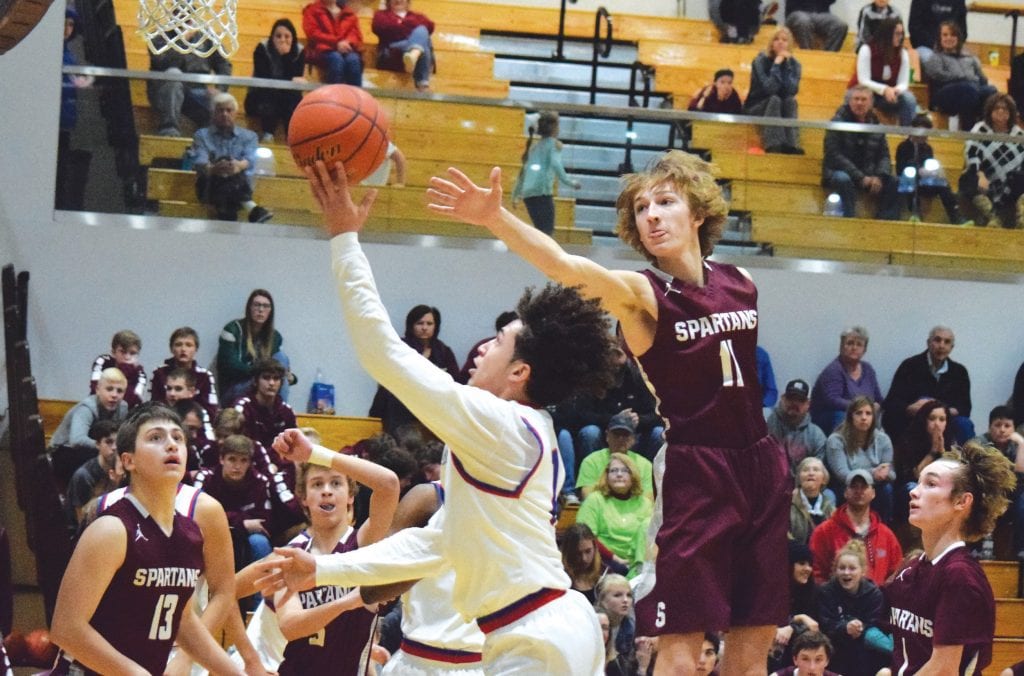 SPEARFISH — A balanced, sustained attack proved to be what it took for the Douglas Patriots to finally beat the Spearfish Spartans, 65-54, in Class AA basketball action last Saturday night in Spearfish.

Last year Spearfish was only Class A, but twice beat a pretty good Douglas team who has all their starters back, plus a big addition. That would be 6-4 junior Darius Dawson, who complements an experienced group of seasoned battlers, and adds one more player to an already deep bench. This bench seems to naturally spread the work load out, so the opposition has a hard time keying in on one player to shut Douglas down, and makes it tough to pick out which five players to start, or as Douglas Head Coach Travis Miller puts it, “It’s a nice problem to have.”

Only one team, the Rapid City Central Cobblers, can match Douglas for bench depth in West River, and these Cobblers are 9-0. The Patriots started the year 2-0, then dropped three straight in close games, one of those to the Cobblers, where they fought their way back from a big hole, but still took a loss. The win over Spearfish marked their third win in a row and put their mark at 5-3.

If they have a weakness, they appear to go into lapses that allow another team back into a game, or to build a big lead. But overall Miller is pleased with where his team is at compared to last year.

“I think we’re a bit more focused,” Miller said. “We’re playing hard, and you throw Darius in there, and our inside game has definitely improved over last year.”

Miller credits all the basketball the boys played over the summer for establishing the team depth and balance, and those two factors will have to be milked for all they are worth if the Patriots are to prevail over the big Class AA schools with twice their enrollment.

Against the Spartans, Douglas shot out to a 7-0 lead, but the Spartans stayed scrappy, and trailed 23-18 after one period. In the second quarter, the Patriots built that lead to 32-20, when Chance Sorensen stole the ball, and fed Sam Hand for a lay-up. The half ended with Douglas up, 36-22.

Things didn’t improve for Spearfish back on the court. Point guard Russell Morton stole the ball, bounced a pass to the oncoming Pourier, and Pourier slammed it home, but the ref blew a seriously quick whistle, and gave him a technical for hanging on the rim. Even the Spearfish fans expressed confusion over that whistle.

As late as the 4:25 mark of the final quarter, Douglas led by 60- 42, but the Spartans were about to make a run. Their tiny point guard, Jace Engesser, kept the offense set along the perimeter despite Patriot pressure, and the gap closed to 63- 51 when hustling Tayven Aga was called for a highly suspect charge, by the same ref who had blown the technical on Pourier. Not his best night. Especially since this fouled Aga from the game, just when his sparkplug talents were needed most.

Even so, Brady Gregor, who would lead all scorers with 14 points, closed the gap to ten with a long-armed bucket in the lane, was fouled, and hit the free throw to close the gap to 63-54. Then, with the clock dipping under two minutes, came the usual forced-to-foul scenario that generally results in failure.

The Patriots outrebounded the Spartans 38-30, but the difference in the game is they shot 44% and the Spartans shot 38%., on a near equal number of shots, 53- 52. Neither team produced much from long range, but Morton especially kept the defense honest by repeatedly slicing into the lane and creating havoc. He did turn the ball over seven times, but he also stole it five times and had three assists.

Nothing major looms for Douglas until Rapid City Stevens comes to Box Elder on January 16. Spearfish has drawn Belle Fourche and Hill City next two games, games which they can win, before having to face a tough Sturgis squad in Sturgis on January 19.