Low morale in ranks of Post 22 contributed to loss 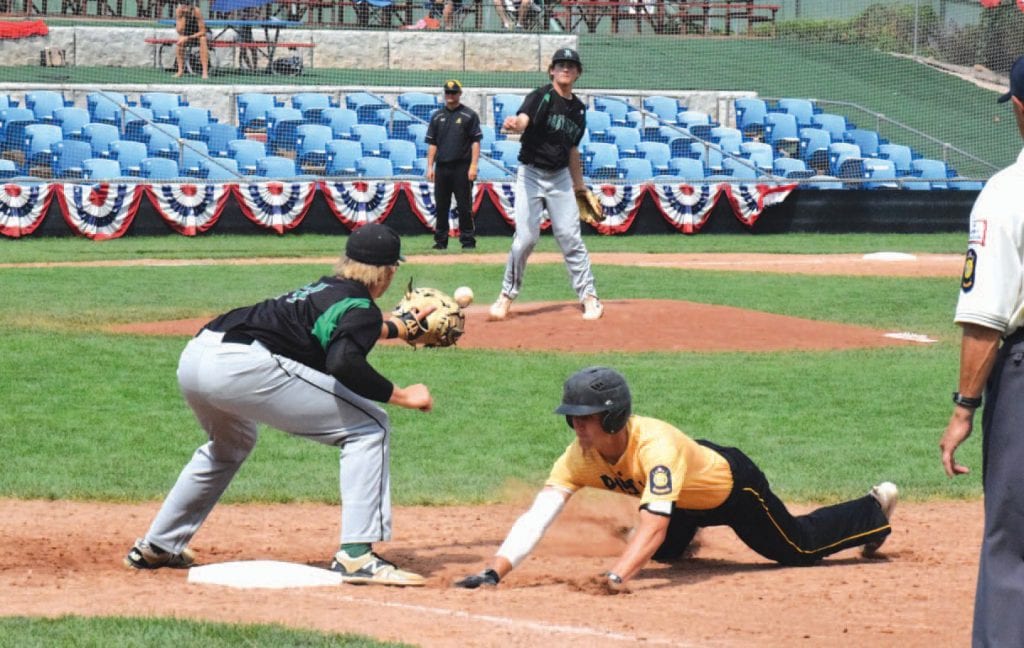 Kyle Stover comes within a whisker of picking off Mitchell’s Spencer Neugebauer. Playing first base for Pierre is Joe King.

RAPID CITY—Pierre could not be rattled this post season, mostly they won big, but when they had to, they won a squeaker over Mitchell for state bragging rights. They defeated Mitchell Post 18 to win their region, and then came to the state tournament at Rapid City’s Floyd Fitzgerald Field and defeated the host Post 22 team, 10-3, before beating Mitchell again, in eleven innings, 12-10, for the state title. 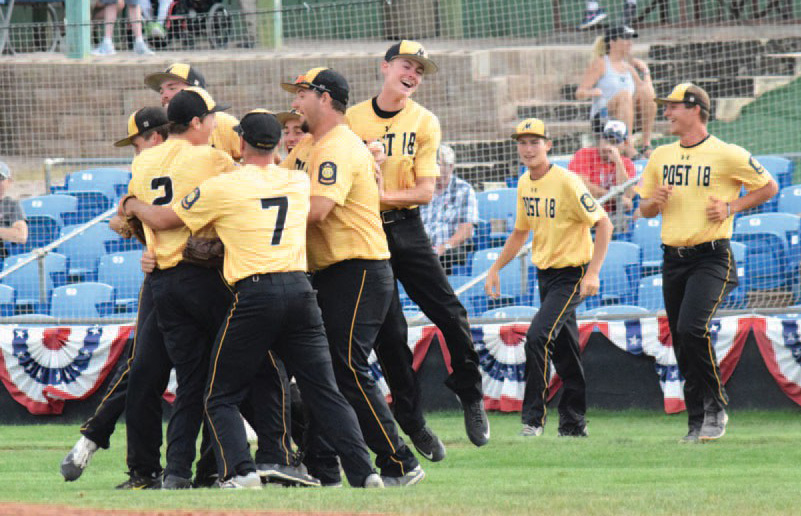 Mitchell Post 18 celebrates after becoming the first South Dakota team to defeat Post 22 in the playoffs in five years.

Rapid City Post 22 is always the favorite to capture the South Dakota American Legion baseball crown, especially when they go 51-9 on the year, defeat Pierre all three regular season meetings, last one by 19-0, and are 11-0 against all South Dakota competition. But this was not the same Post 22 team. Dissension in the ranks, after the dismissals of Connor King and Erik Petry for violating team rules, could not have helped. Team morale is always a fragile thing with teenage boys. 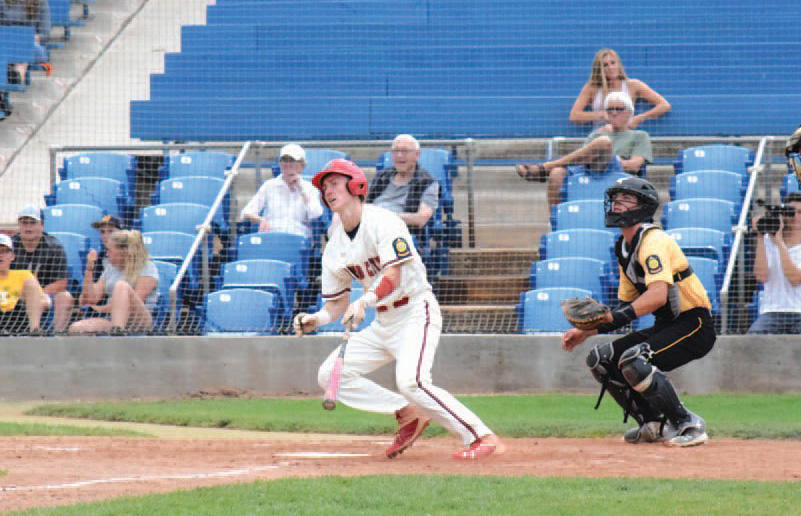 Against Mitchell, Post 22 had the bases loaded with one out in the bottom of the second, and came away with nothing. This would come back to haunt them, as they went into the bottom of the ninth inning, down 5-4, three outs from elimination. Even then, fans could not bring themselves to believe they would lose. The eventual champs, Pierre Post 8, were in the stands watching, and could be overheard saying about Post 22, “Oh, the heart of the order is due up; Mitchell is toast.” 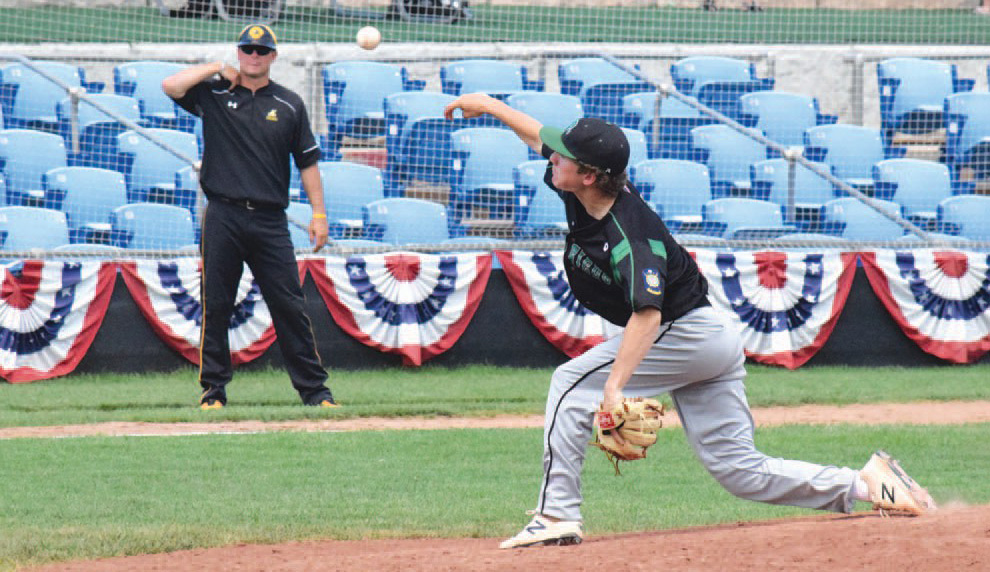 Pierre pitcher Kyle Stover kept the Mitchell hitters off balance for six innings before giving away to Austin Hoss in relief.

But that is not what happened. Jared Miller would get the win for Mitchell, but Koby Larson was the man of the hour, facing the heart of the Post 22 lineup with a one run lead to protect. Shortstop Cooper Bowman, who has indicated he will be playing for the University of Hawaii in 2019-20, and the team’s leading hitter at .399, was first up. He popped up Larson’s sixth pitch to second. That brought up power hitting Zach Solano. He fouled off two pitches, took two balls, and then lined out to third base. Catcher Timmy Paris was able to earn a six-pitch walk, and Tod Stephens was stuck in to pinch run for him. That brought up Zach Sumption, with a fast runner at first, and the winning run on his bat. Sumption took a hard cut and missed. Larson attempted to pick off Stephens at first. No go. Sumption took a strike looking. And then Sumption sent a fly ball out to leftfield, where it found the glove of Spencer Neugebauer, and it was over. Mitchell had hung on, 5-4. For the first time in four years, Post 22 would not be state champion.

Pierre wasted no time assuring that a second game would not be necessary, jumping out to a 5-1 lead after three innings. Post 8 has a little 5-8, 150-pound right hander, Kyle Stover. For whatever reason, the Mitchell batters thought he was throwing gas, and he wasn’t. They got out front on everything, pulling to the third base side, and they would not get Stover in trouble until the seventh when he was pulled for Austin Hoss. By the time Hoss was done it was 10-9, Pierre, and Spencer Sarringer came on in relief, giving up one more run to tie the game 10-all, although that run was charged to Hoss.

Sarringer would go 4.2 innings, and hold off Mitchell so his teammates could rally in the top of the eleventh. Peyton Zabel, all 6-foot-6 of him, who scored the winning bucket in the Pierre win over Rapid City Stevens at the State AA basketball tournament last March, singled to leftfield. Garret Stout then bunted Zabel to second and was safe at first. Joe King sacrificed Stout to second and Zabel to third. Hoss, having been switched to third base in the seventh inning, more than made up for his awful pitching by singling to center field, driving in Zabel, the eventual winning run, and Stout right behind him.

In the bottom of the eleventh, Drew Kitchens singled for Mitchell, but after battling

Sarringer for six pitches, Sam Michels flew out to leftfield. Carter Max then popped up to second. Down to their last out, Bryce Garaets was plunked, putting the winning run on base. Jared Miller was inserted as pinch runner. All Mitchell needed was a hit. Shortstop Calvin Hegg came up to the plate. Sarringer’s first pitch was a ball. Hegg took his second pitch for a strike. The next pitch was followed by the crack of the bat, and Hegg sent a fly ball out to centerfielder Landon Badger, and Badger ended the game with his catch, giving Pierre their first state championship since 1968.

Starting in 1970, Rapid City Post 22 won eleven straight state championships, and they have won seven of the last ten, the last four in a row, so it is no wonder a Mitchell parent said during the championship game, “You know, we really don’t care who wins, as long as it isn’t them.”