Pine Ridge cagers could have a big year

Class AA basketball season should be one for the ages 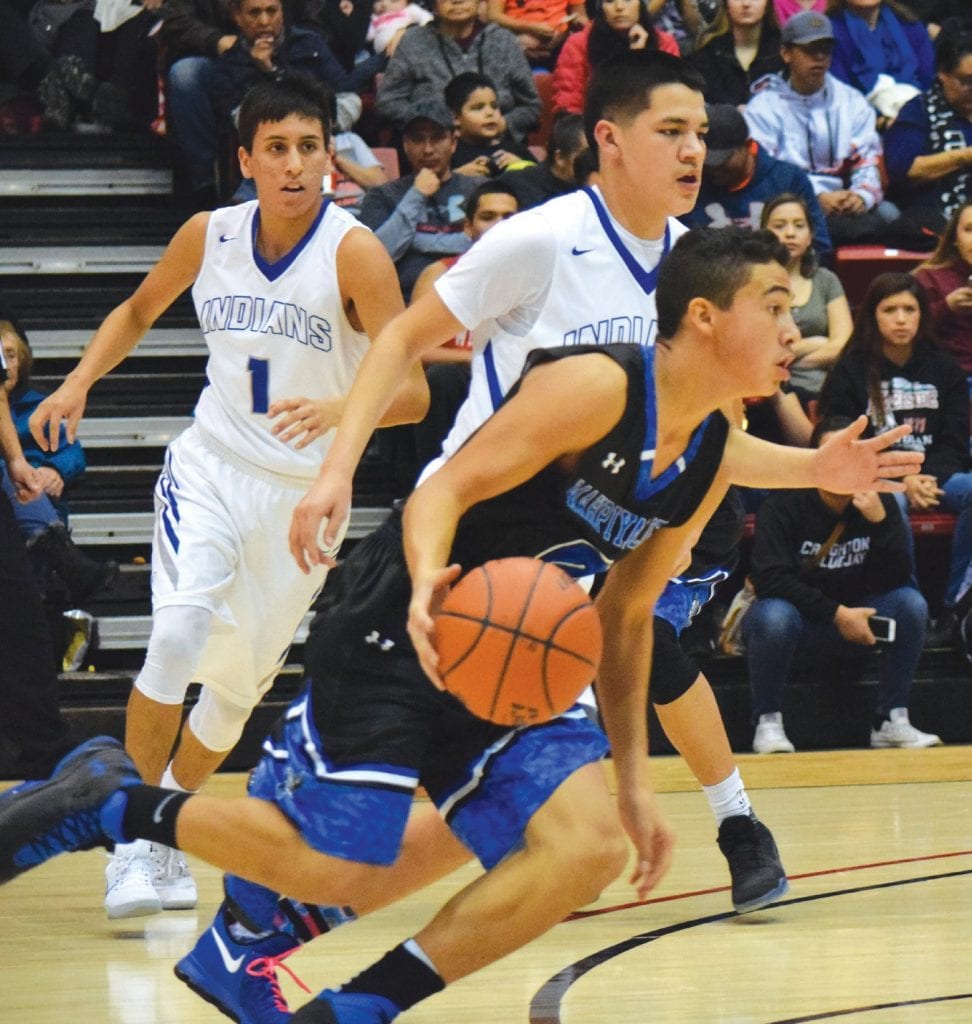 RAPID CITY — Graduation has weakened many of the basketball teams across the state, at all class levels. There are some notable exceptions, and these exceptions could not have picked a better year to bring back all their starters. The path to the state tournament will not be as formidable as in past years, particularly with the advent of the Sweet 16, giving local teams a chance to get past a tough nearby rival. In the Sweet 16, the last 16 teams surviving in the play-offs are reseeded for round-of-16 play, and travel to the nearest available neutral site between the two. 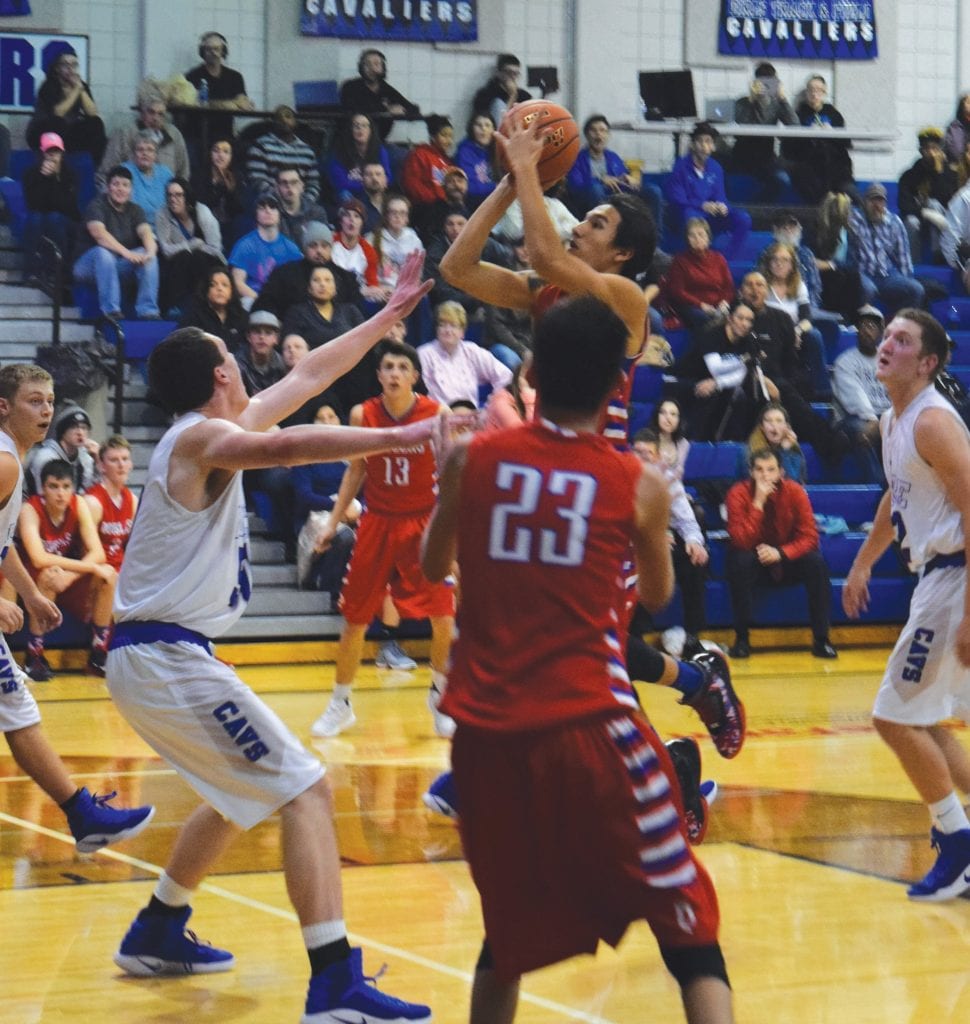 Cetan Big Crow high flies through the lane for Douglas against St. Thomas More in 2017. The Patriots led at half, but the Cavaliers came back to win.

This travel does not always reflect the balance the South Dakota High School Activities Association (SDHSAA) ostensibly desires, as West River teams often have to travel many times further to the neutral site than East River teams, often in bad weather over treacherous roads. To be fair, East River has more available sites, and because a West River team is the opponent, SDHSAA must find a site outside the area where optimal sites are common. 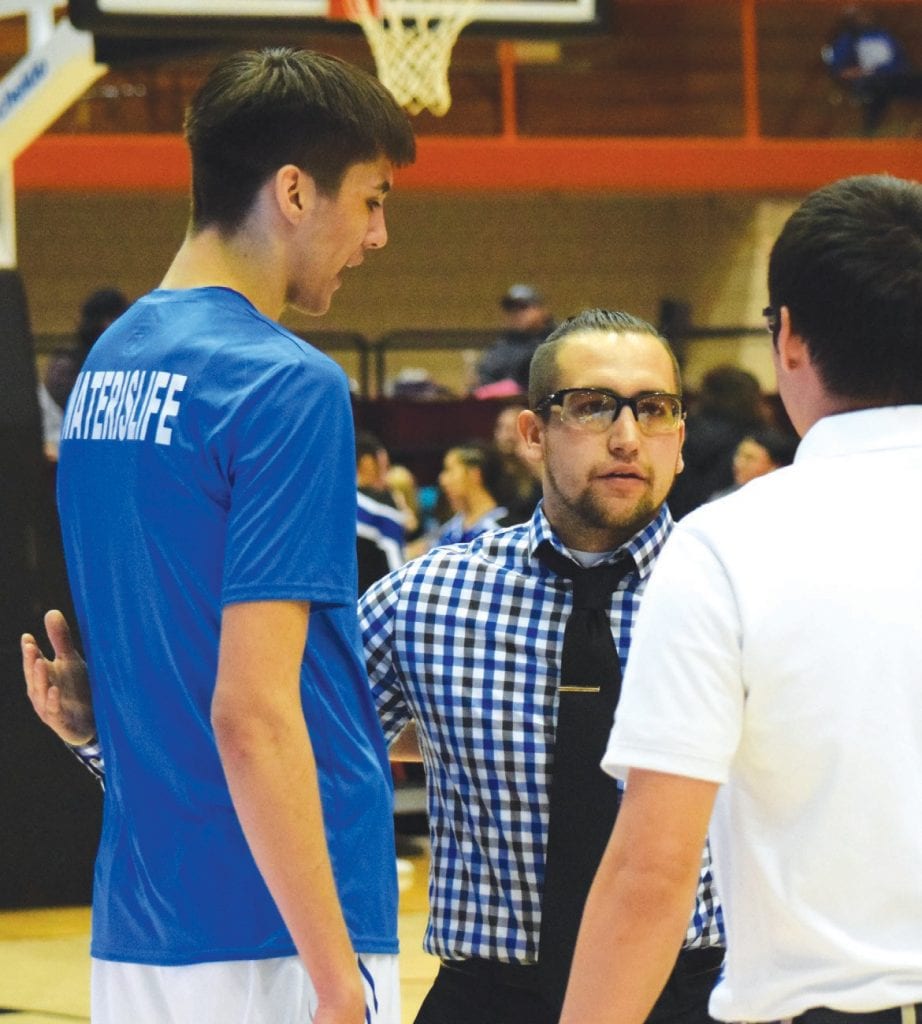 However, last year Pine Ridge had to travel to Pierre in volleyball, while opponent Mobridge just zipped down the river. On site SDHSAA representatives said this was the only neutral site available. Subsequent investigation by NSNT indicated alternative neutral sites, closer to Pine Ridge, were available. Had Sisseton or Dakota Valley been the opponent, obviously, Pierre would have been a reasonable neutral site. 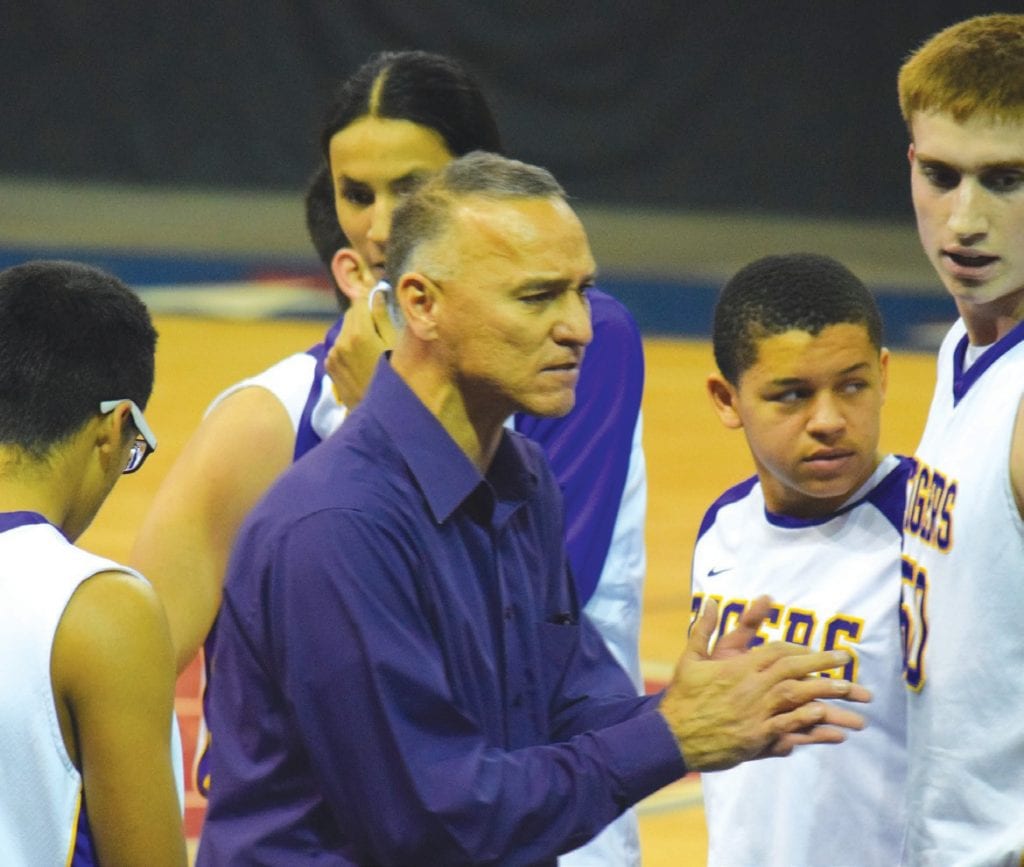 This year the NSNT will keep an eye on how fairly such sites are determined in basketball. In addition, the NSNT will keep track of just two stats from as many ballgames as possible: fouls for and against. The intention is to produce hard data, for or against, the notion of officiating bias, as every year this seems to be a chronic problem that never gets better.

At the start of Hoosiers, perhaps the best basketball movie ever made, Gene Hackman asks his players to gather round so he can “see what kind of hand I’ve been dealt here.” It doesn’t look like much of a hand, but that team will end the season as Indiana state champ. These extreme rags-to-riches stories seldom actually happen, but every coach starts every season with a perfect record. Hope springs eternal.

Let’s look at the top teams in Lakota country, based upon their seed in next month’s LNI, to see what kind of year each team might have in store. Some teams will have already opened their season, but the LNI will be the first test for some others.

The most glaring difference from last year’s LNI is Winnebago will not be present. This will not influence the Girls draw much, but the Boys can all heave a sigh of relief. Even with the graduation of David Wingett, Winnebago so dominated the tournament the last two years, they still had the horses to be the presumptive favorite. Winnebago Coach Jeff Berridge, a gritty product of Haskell, cited travel expense as the reason, but the real reason may be they did not feel especially welcomed or appreciated, and they felt they could get tougher games closer to home. For example, after LNI last year, they had a special game against Omaha Central, a team which plays in a metro class above the top class South Dakota has to offer, and although Winnebago lost, Wingett put up 40 points against them, and had a shot at the win late in the game.

In the LNI Girls draw, Todd County is deservedly seeded number one. Bob Boyd’s Lady Falcons finished last season 19-4 and lost only one player to graduation. They lost in the LNI semis last year in a toe-to-toe slugfest with eventual champion, Little Wound, 47-45. They went on an 11-game win streak before falling to Donna Taken Alive’s McLaughlin team, 81-69. After a few more wins, they lost a rematch to Little Wound, 70-61. Come play-offs, they crushed Bennett County, 103-14, took out arch-rival St Francis, 70-49, before ending their season with a Sweet 16 loss to Dell Rapids in Chamberlain, 59-49.

Pine Ridge is seeded number two at LNI. Laura Big Crow’s Lady Thorpes survived a rocky preseason last year, when key players defected north to Little Wound. They posted a 13-8 record last season and lost four players to graduation. They beat arch-rival Red Cloud at LNI, 61- 51, before falling in the championship game to Little Wound, 65-31. Little Wound beat them weeks later, 76-62, and Todd County beat them, 87-60. Then came the highlight of the season, a 58-57 upset over Little Wound at Pine Ridge, probably the best basketball game played last year, as the defected players came home for a showdown. However, their season ended with a 58-57 upset loss to St Francis. Overall, the Lady Thorpes will be as tough as they were last year in a field not as tough as it was last year.

Custer is seeded number three. They went 15-8 last year, but lost a whopping seven players to graduation, and they were good players. Still, the Lady Wildcats never lack for effort, they will fight tooth and nail, as they beat a red hot McLaughlin team 62-53, but could not handle the Lady Broncs of Belle Fourche who ended their season, 53-42.

Defending LNI champion Little Wound looked like a team of destiny last year. They won the LNI for the first time in over 30 years, went 20-5, and they beat Winner to get to the state tournament in Brookings, before running into the one opponent they can’t beat, the official’s whistle. Some of the worst refereeing in a state with some of the worst refereeing came down on the Lady Mustangs, and they lost to Webster, 57-50, in the first round. When Miracle Spotted Bear complained about the officiating, she was, of course, teed up. And yet, when a Webster player bounced the ball off the court in anger, clear over her head, an official standing right beside her, he ignored it.

Understandably, Lady Mustangs Coach Lyle Lebeaux was distraught after such a loss. The Watertown Public Opinion ascribed the Webster win to keeping their composure (selectively forgetting the ball the player bounced over her head), and “free throw shooting.” It is astonishing how many East River teams win because of “free throw shooting,” (which is how biased referee whistles express themselves), and even more astonishing, how the East River press corps never seems to notice it.

It is hard to agree with the LNI seeding in the Boys draw. So, we will just select what NSNT considers the best four teams.

Pine Ridge could not have picked a better year to be themselves. Last year they went 17-6. Coach Corey Shangreaux had a super sophomore class, now juniors, and he should be loaded for bear come LNI. DJ Vitalis, Halin Bad Bear, Juwon Garnier, Joe O’Rourke and Corey Brown give Pine Ridge a competitive core one year wiser and stronger, and because the rest of West River basketball is so down, the Thorpes should romp to a memorable season.

It appeared Little Wound had lost towering Tex Janis to Red Cloud. That did not happen. But they did lose 10 players to graduation, and Riley Cross will be out with a football injury. Still, Jay Jacobs has a lot of depth and the underclassmen will step up and make the Mustangs better than people think they will be.

White River was hurt by graduation last year, and hurt even worse this year. Gone are big man Camren Folkers, and team captain Justice Morrison. What Eldon Marshall has, is a returning corps of highly promising underclassmen yet to prove themselves, and Eldon Marshall. When you take your team to over a dozen straight Class B State Tournaments, you are the biggest asset. If any man can mold the unproven into a championship caliber squad, it would be Marshall. White River has depth. If four guys get tired, four respectable guys can relieve off the bench. They do not have a Justice Morrison, however, and one of these players must step up and fill his critically important role as clutch shooter and floor general.

Red Cloud has had the same problem these past few years, they fold come play-off time. For two straight years, it has been Winner. Last year they lost both Ale Rama and Russell Leader Charge for long stretches with leg injuries. Both are back and healthy, although Leader Charge badly damaged an elbow in football, and hopefully it heals by LNI. Manny Yellow Horse is still 6-5 and wiry strong and underclassmen Jesse Jensen and Riyen Carlow are a year older and stronger and will greatly bolster Crusader depth. But Christian McGee’s scrappy squad lacks that big man dominating the paint. They always have. The key to their success is getting second shots off offensive rebounds, despite missing that key component. They have the athleticism to pull that off.

The sports program up at Cheyenne Eagle Butte is a mess. The Braves have had the talent, last year they gave tough teams tough fights, but the team lacks killer instinct and identity and they don’t play like a team much of the time. They went 6-15 last year, and given their talent, should have been 15-6. They lost 10 players to graduation. Look for this to be another 6-15 type year.

Normally Class AA doesn’t mean much to Lakota country basketball fans, because they play few Lakota ballplayers. Last year, over half the Raiders from Rapid City Stevens were Lakota, as were over half the Patriots from Douglas. The Lakota have arrived in large numbers in Class AA, and expect that pipeline to keep producing these players.

Stevens lost most of their Lakota players to graduation, but Douglas has all their starters back. They will be tough. Rapid City Central has a Lakota presence and they should be tough as well, probably the team to beat. Given the racial incident at Sturgis with Pine Ridge, any matchup with Sturgis and Douglas, and there will be two of them, should be highly charged. Also, Sturgis will play Red Cloud later in the year. Sturgis had a great team last year and lost no players to graduation. Should be a stellar season for West River Class AA basketball, one Lakota country folks should take the time to follow.