Thorpes dominate line of scrimmage on both offense and defense 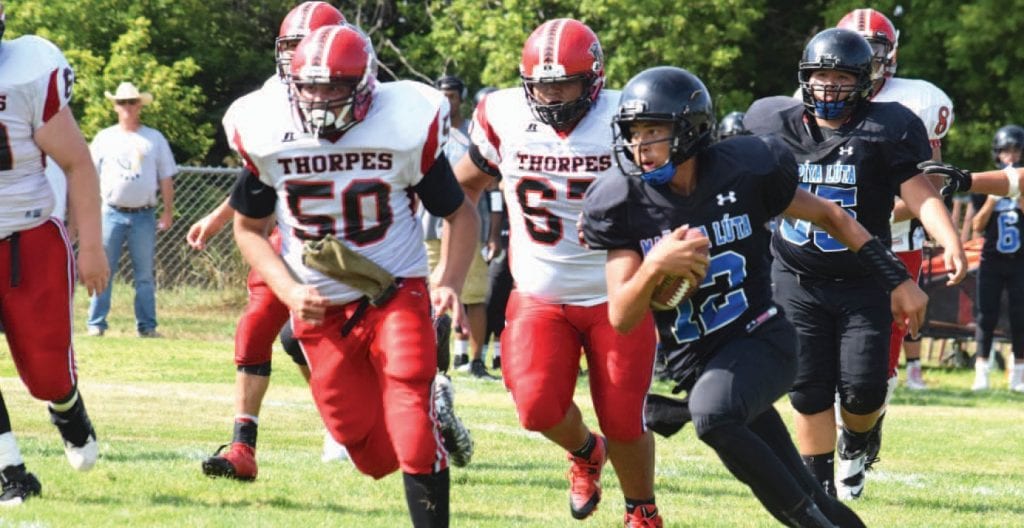 Ale Rama was the only running threat Red Cloud had against the Pine Ridge defense.

PINE RIDGE –– It took five years of plugging away, but when the Pine Ridge Thorpes finally beat crosstown rival Red Cloud, 41-18, they pulled no punches, grinding out a convincing win under a scorching August sun.

The game was repeatedly stopped for heat time outs, but it started out as the usual Crusader/Thorpe matchup, with Red Cloud controlling the game tempo and punching the first touchdown in: on a fourth-and-ten from the Pine Ridge 15-yard line, the elusive Ale Rama scored on a quarterback keep, to put Red Cloud up, 6-0. 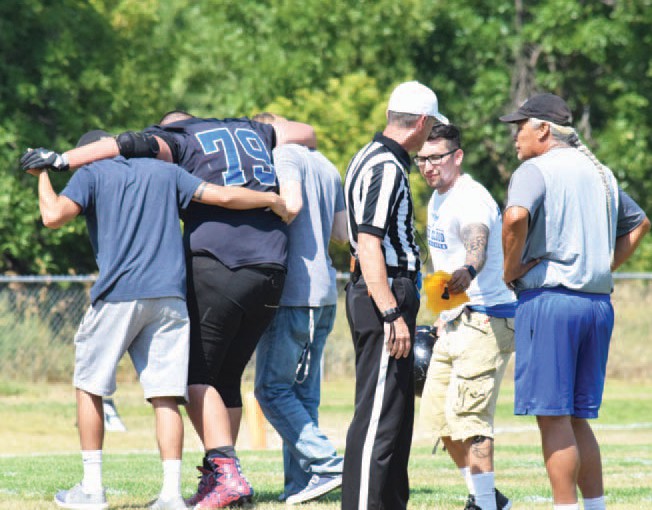 It took only a couple of plays before an illegal tackle knocked 6’9, 380- lbs. lineman Angelo Brown Bear out of the game. Athletic director Christian McGhee hands the flag back to the head linesman while Red Cloud head coach Duane Big Crow looks on far right.

Patrick Clifford intercepted the 2-point conversion pass, and he would have a big day as Pine Ridge’s principal ball carrier, rushing for over a hundred line-bucking yards, and collecting some tough tackles in heavy traffic on defense. 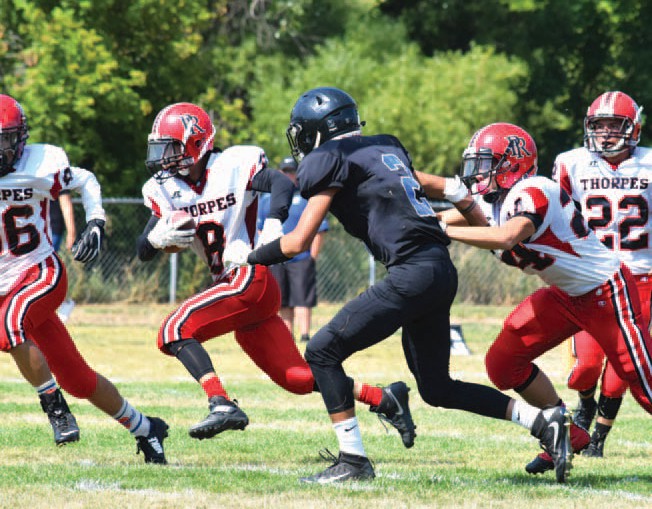 Pine Ridge had bungled their opening possession with penalty flags, and so even though the Crusaders were missing the best offensive weapon in the state, in Russell Leader Charge, the Rama directed backfield of Garrett Richards and Manny Yellow Horse seemed like it would be enough to prevail over Pine Ridge. Leader Charge is out four to six weeks with an elbow injury, and there is no way any team could replace him, let alone a team with a thin bench, built around his explosive talents.

Red Cloud didn’t know it, but not only was the tide going to turn, all the wheels were about to come off, and Pine Ridge was going to find their focus, their confidence, and steamroll over the home team.

For a long time, the Thorpes have fielded teams loaded with talent, but an unstable program, hampered by a revolving door of coaches, have denied them their potential.

Not so on Friday. Two standout basketball players, Halin Bad Bear and Corey Brown, displayed the football grit and skill sorely needed by the Thorpes of late. Bad Bear has taken over quarterback duties from Cecil Apple, who Coach Corey Shangreaux said requested to play another position. Brown has taken the receiver role, whether at wide, or tight-end, he is a horse to bring down, and although he lacks great speed, his cleverness with hands and feet creates scoring opportunities where others would have given up on the ball.

After going ahead 6-0, Red Cloud’s defense, still fresh and healthy, shut down the Thorpes, forcing a punt, and they took over, first-and-ten from the Pine Ridge 49 yardline. Things would never look rosy again.

Pine Ridge has big aggressive boys on the line, on offense and defense, and they began to plow huge holes into the Red Cloud line of scrimmage, shutting down the Red Cloud ground attack, and imposing the ball-control running game that would prove Red Cloud’s undoing.

Pine Ridge took over on their own 49, when the Crusaders couldn’t move the football. On second-and-ten, Bad Bear rolled right and fired a short pass to Brown, who used his hand to push off the sideline defense of Jesse Jensen, and then cut down the sideline for a gain of 39, dragging several Red Cloud tacklers the last ten yards.

On the next play, Bad Bear then found fiery little Darrell Vitalis in the end zone for six. The PAT snap was bobbled, Vitalis scooped up the ball, but came up inches shy of a two-point conversion. All tied up, 6-6.

Neither team could move the ball next two possessions. Finally, Rama fired a pass to a wide open Yellow Horse, but it went off his finger-tips, straight into the hands of 5-11, 285-lbs fireplug, Dante Bravo. Clifford then busted a big run up the gut, for a 14-yard gain down to the Red Cloud 28-yard line.

“I don’t think that is Patrick out there anymore,” Trevor Pulliam remarked to teammates on the sideline. “More like Marshawn Lynch.”

Pine Ridge would not score on this possession, but the running attack of Clifford and Vitalis continued to eat up a lot of clock, and after Vitalis intercepted Rama in the end zone for a touchback, Pine Ridge took over at their own 20, and Clifford broke off a 12-yard gain, took the next hand-off and ran for 14 more. The officials then called a heat time out.

Clifford needed some sideline attention. “Just overheated a little, he’s all right,” the bench explained. With Clifford recovering, Vitalis and Bad Bear took over running duties, and Bad Bear ran it in from seven yards out. Vitalis ran in the 2-point conversion, and Pine Ridge had the lead 14-6.

At this point Red Cloud had lost the ability to run or stop the run effectively. Quarterback Rama remained a dangerous, elusive weapon, he would wind with well over a 100 yards on the ground alone, but he also wilted under the heat, and threw four interceptions. The Crusaders lost last week’s hero, Jensen, to a disqualification that was actually a misunderstanding. He will also miss the next game. They lost Richards to injury, Riyen Carlow was injured, only Yellow Horse and underclassmen remain to run the football. Red Cloud went from a huge road win over Lead/Deadwood last week, to a crushing, costly defeat at home. So, even though they are 1-1, as opposed to 0-2 last year, they do not have the team left on the field they had last year, a team that put together a storied win streak that propelled them into post season play.

Pine Ridge remained unrelenting, despite the heat, on both sides of the ball, and took total control of the game. When the dust had settled, Shangreaux said, “Our guys have been playing varsity together since they were freshmen. We are always hurting for players, so they have had to learn to play every position.” All those lean years have made the Thorpes competition tough, and with the addition of terrific athletes like Bad Bear and Brown, and bruising linemen like Bravo, they could be a force to be reckoned with in 11- A.

“Our kids did good,” Red Cloud Head Coach Duane Big Crow said. “They just got tired out from those big bodies.”

He knows the next few weeks are going to be tough on the Crusaders. They will have to step up and find some blocking for the runners, and some tackling on the line. Next Friday they have Cheyenne-Eagle Butte at home. The Thorpes have Lead/Deadwood at home, and the Diggers lost, 46-32, to Red Cloud earlier this season, so it will be a good benchmark to see where the Thorpes are at as a team. Right now, they are playing 11-B opponents, but eventually they will take on 11- A teams, and that will be the true test.