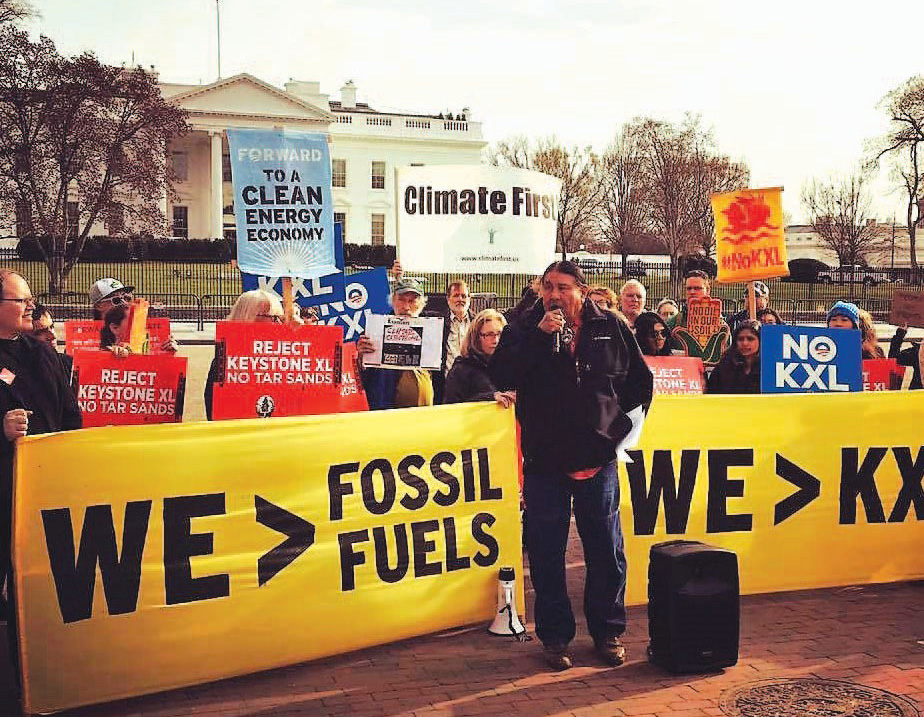 Indigenous Environmental Network Director Tom Goldtooth spoke at an emergency rally at the White House, saying that the decision to grant a Presidential Permit for the Keystone XL Pipeline “is an act of genocide and ecocide against the Dené and Cree First Nations and Métis, who are experiencing life and death reality of being downstream of the Alberta Canadian tar sands, the source of the highly toxic corrosive crude oil that would flow through this.”

SPEARFISH –– On March 23, the date the U.S. State Department granted a Presidential Permit for the previously rejected Keystone XL route, a Potawatomi philosophy Ph.D. speaking here was among the first of thousands to decry the pipeline proliferation it promotes.

“If treaty rights or religious freedom were respected, the decision about where to put it would have respected those to begin with,” said Michigan State University Professor Kyle Whyte.

Native Americans “have exercised tremendous leadership” in the movement to slow the production and distribution of fossil fuels, at the wellheads and along the pipelines, Whyte told an audience of about 100 people at the 19th Annual Black Hills Research Symposium.

Indigenous opposition to rampant oil and gas infrastructure de- velopment has a positive impact on the changing global climate, he said. “But you can only deal with climate mitigation and adaptation through full decolonization,” he added during his lecture at Black Hills State University.

Toward that end, Whyte urged members of the public to advocate “on a daily basis” for lawmakers to address unresolved “longstanding issues like treaty rights and funding for tribes to have more effective governments.” f

—Those are underlying issues, together with skewed history teaching, that lead to the likes of pipeline conflicts

Treaty territory for eight years of the past two presidential terms.

Former President Barack fObama’s State Department eventually responded that the project was “not in the national interest,” denying a tPresidential Permit because of its role in greenhouse gas pollution and its lack of benefits for the domestic economy. t President Donald Trump disagreed, inviting TransCanada to resubmit its proposal and urging State

Department approval, with the caveat that the pipe should be American-made. Trump later dropped the requirement, as his Administration faced a $15-billion free-trade lawsuit TransCanada Corp. filed against the United States over the permit denial late in Obama’s second term.

The Canadian corporation wants to build a 36” conduit from the Canadian border across unceded Lakota Territory in Montana, South Dakota and Nebraska, so that it can hook up pipes with the rest of the line it built recently for the purpose of shipping tar-sands crude oil from the Dené, Cree, and Metis territory of Alberta Province to Texas Gulf Coast refineries and export facilities.

In announcing the new State Department’s decision reversal and the granting of the permit for the estimated $10-billion private investment on March 24, the Administration said:

“Having weighed multiple policy considerations, the Under-Secretary of State for Political Affairs finds that, at this time, the proposed project’s potential to bolster U.S. energy security by providing additional infrastructure for the dependable supply of crude oil, its role in supporting, directly and indirectly, a significant number of U.S. jobs and provide increased revenues to U.S. communities that will bolster the U.S. economy, its ability to reinforce our bilateral relationship with Canada, and its limited impact on other factors considered by the department, all contribute to a determination that issuance of a Presidential Permit for this proposed project serves the national interest.”

The State Department had announced earlier in March that Secretary of State Rex Tillerman recused himself in February from the decisionmaking. The notice came only after Greenpeace USA Executive Director Annie Leonard requested the recusal on the grounds that Tillerman stood to profit from the project, having been CEO of ExxonMobil.

Under-Secretary for Political Affairs Thomas A. Shannon Jr. signed the Record of Decision.

“We greatly appreciate President Trump’s Administration for reviewing and approving this important initiative, and we look forward to working with them as we continue to invest in and strengthen North America’s energy infrastructure,” he said in a media statement.

South Dakota Gov. Dennis Daugaard welcomed the permit, saying “This is a victory for all of us who rely on oil to heat our homes, fuel our cars, and power our tractors; and pipelines are the safest and most efficient way to transport oil.

“I recognize that some South Dakotans will not celebrate this news, and I respect that perspective. I hope we will all seek to exercise our First Amendment rights peacefully, and respect the right of others to do likewise,” he said.

Licensing and permits expert legal advisor Fred Jauss said TransCanada Corp. “has cleared a big hurdle towards its goal of getting Keystone XL operational. However, the Presidential Permit is only one part of a web of federal, state, and local permits that must be obtained prior to starting construction.

“Other federal agencies, such as the Army Corps of Engineers, state regulatory commissions, and even local planning boards may have requirements that need to be fulfilled by Keystone prior to construction,” said Jauss, who is a partner at the international law firm Dorsey & Whitney.

“In addition, TransCanada may still need to reach deals with hundreds of potentially affected landowners on the pipeline’s route. There is a lot of work ahead for TransCanada before crude oil starts to flow from Alberta to the Gulf Coast on Keystone XL,” he said.

Tribes and allies in South Dakota have the state Public Utilities Commission in appeals court for permitting the construction with allegedly inadequate review. Meanwhile, Nebraska’s Public Service Commission is considering TransCanada Corp.’s application for the state construction permit needed there.

So far, no legal route is in sight for the pipeline through Nebraska. The state decision may take from eight months to a year. If the permit is granted, TransCanada Corp. will then face landholders determined that the private project should not be ceded the right of eminent domain to take their lands for construction, because it is not a public service.

The granting of the federal permit caused an avalanche of scorn in Indian country and a swift backlash in the major cities.

Indigenous Environmental Network Director Tom Goldtooth spoke at an emergency rally at the White House, saying: “This decision is an act of genocide and ecocide against the Dené and Cree First Nations and Métis, who are experiencing life and death reality of being downstream of the Alberta Canadian tar sands, the source of the highly toxic corrosive crude oil that would flow through this KXL pipeline.

“We only have one Mother Earth. In many of our indigenous traditional and spiritual ways, we are taught to be protectors for the welfare of the seventh generation to come. We are taught to respect the sacredness of Mother Earth, Father Sky and the water of life. President Trump and the fossil fuel extractive industry and their corporations do not understand this,” he said.

Following is a compendium of other reactions:

Standing Rock Sioux Tribal Chair Dave Archambault II, noting the pipeline would only create 50 permanent jobs, as per the State Department’s analysis: “On his second day in office, this President made it his priority to push through two controversial pipelines. The Dakota Access and Keystone lines are dangerous, and were previously halted due to their risks to public safety.

“Once again, the treaty lands of the Great Sioux Nation are threatened by Keystone— a perilous pipeline. President Trump has described the proposed pipeline as ‘the greatest technology known to man or woman.’ If that is the case, then I would encourage him to do some research and look at the number of oil spills we’ve experienced throughout this country, the levels of water pollution, and the science behind climate change. This is not the way of the future.

“We opposed Keystone before, and we’ll oppose it again. We’ve seen how the sentiment and worldwide support grew with the ongoing Dakota Access Pipeline battle. While we continue to fight DAPL in court, we will oppose Keystone on all fronts as well. We hope that everyone around the world who stood with Standing Rock on DAPL will continue to stand with us and all the tribes as we continue to fight these dangerous and shortsighted infrastructure projects that serve only the interests of billionaires.”

Ponca Tribal Council Chair Larry Wright Jr., launching his federally recognized tribe into the Nebraska Public Service Commission’s permit process, said, “The Ponca Tribe of Nebraska is vehemently opposed to the pipeline and have been from the beginning. We are very concerned about the safety and environmental impact this has. The tribe has an interest in protecting historic cultural sacred archeological sites and resources.

“We want the water in this great state to be protected, as it affects all of us and is sacred to us. This is really based on an economic standpoint that has limited returns but the potential for an environmental disaster and continued raping of our land.”

Rosebud Sioux Tribal Councilor Wayne Frederick said, “We are extremely disheartened by the current decision to approve this dead project, the KXL. This is a foreign project, yet the American people are taking all the risk. The bitumen is not sought after anymore on the market, and is certainly not worth jeopardizing the United States’ largest aquifer. Professionally I would have hoped this President would have reached out to the Midwest tribes for input and perspective. Respect our existence or expect resistance.”