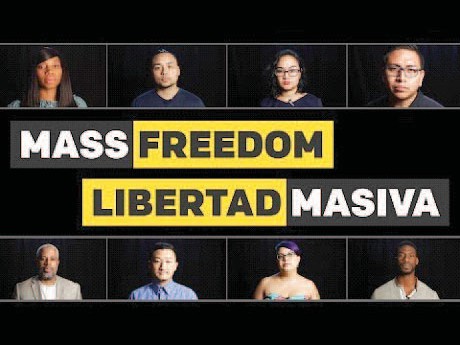 NEW YORK — As mass criminalization continues to target and harm communities of color, Race Forward: The Center for Racial Justice Innovation today announced the launch of the Mass Freedom project. Mass Freedom aims to bridge the movements fighting to end mass incarceration and mass deportation under a shared vision for a multiracial democracy.

“Mass criminalization is an assault on the humanity, safety, and fundamental rights of people of color,” said Glenn Harris, President of Race Forward. “Our nation is facing an existential crisis as mass deportation and incarceration continue to ravage communities of color. Mass Freedom is our effort to come together, take action, and unite amidst a political landscape that grows more threatening with each day.”

Building upon the decades of work and visionary thinking by activists who have been leading the fight for racial justice, Mass Freedom will focus on elevating the voices of those who have been most impacted by mass criminalization while sharing visions, solutions, and strategies for a better future.

MassFreedom.org, which will serve as a platform for activists engaging on mass criminalization to share stories, solutions, and resources.

Colorlines.com reporting on mass incarceration and mass deportation, and contributions by immigrants, formerly incarcerated people, and others directly affected by the criminalization of people of color.

Resources including videos, articles, tools, and more on the issues of mass incarceration and deportation that are being used every day by organizers and change makers.

“Our criminal justice and immigration enforcement systems are both rooted in a long history of systemic racism, slavery, and the genocide of indigenous people,” said Rosana Cruz, Race Forward’s Vice President of Movement and Capacity Building. “The destructive presence of systemic racism in all of our lives links communities that don’t always see how their futures are intertwined. With Mass Freedom we are hoping to further those futures towards a collective liberation.”

Mass Freedom was inspired by conversations with Michelle Alexander, award-winning author of the critically acclaimed book The New Jim Crow: Mass Incarceration in the Age of Colorblindness, in effort to develop a multi-pronged anti-criminalization project that will serve as a platform for multiracial systemic solutions.

“Inspired by courageous struggles for human rights and justice around the world and the sacrifices of those who have gone before us, Mass Freedom aims to help us rise to the challenges we face,” said Alexander. “By learning from our history and facing our future with open hearts, open minds, determination and courage, we can make America what it must become.”

Race Forward: The Center for Racial Justice Innovation united with Center for Social Inclusion in 2017 to become the new Race Forward.

The new Race Forward is home to the Government Alliance on Race and Equity (GARE), a national network of government working to achieve racial equity and advance opportunities for all. Race Forward publishes the daily news site Colorlines and presents Facing Race, the country’s largest multiracial conference on racial justice.