Rape of the He’ Sapa: From gold to uranium 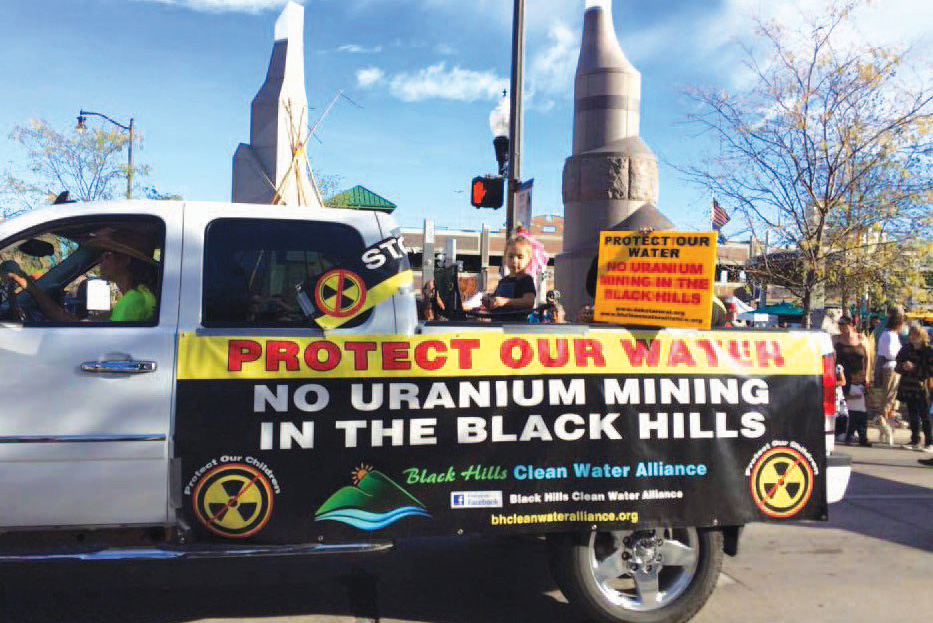 Activists from the Black Hills Clean Water Alliance are calling for public participation in EPA comment forums. “We must once again do everything in our power to protect our waters,” they state.

“This means that we need you — you know, the person who opposes uranium mining but doesn’t know where to start — to help,” said Lilias Jarding, founder of the Black Hills Clean Water Alliance.

The organization and others are calling for people to take part in Rapid City Earth Day Expo events April 21-23, as well as for written comment by May 19, and for oral or written testimony at four hearings April 27 through May 11 on EPA draft permits that would allow uranium mining and waste disposal to take place in the underground water tables at the Dewey Burdock site in the southern Black Hills.

Headquartered in China, Azarga Uranium Corp., formerly Powertech Uranium Corp., wants an EPA underground injection permit for 4,000 wells in the Inyan Kara Group of aquifers, so it can conduct in situ leach (ISL) mining and milling of yellow cake on the 10,000-acre site it is leasing at the Cheyenne River headwaters 50 miles west of the Pine Ridge Indian Reservation near Edgemont.

The company also wants EPA to grant it a deep underground disposal well permit, allowing the mine and mill to pump its wastewater through four wells into the Minnelusa Aquifer for final disposition at a depth of 2,800 feet.

If Azarga Uranium Corp. doesn’t obtain the deep disposal permit, it is set to seek a permit to apply the wastewater to the land surface, according to the environmental impact statement prepared for a Nuclear Regulatory Commission license that is being contested by the Oglala Sioux Tribe, headquartered at Pine Ridge Indian Reservation.

The uranium solution mining and milling project, the first of its kind proposed in South Dakota, would require the state to sign over 9,000 gallons of public water rights per minute (more than what Rapid City uses) for at least 20 years.

“We’ve held Azarga/Powertech Uranium off since 2010 with the help of many dedicated volunteers, grassroots allies, expert witnesses, and tribal historical preservation officers,” the Black Hills Clean Water Alliance said in calling for public participation in EPA hearings. “We must once again do everything in our power to protect our waters.”

The Nuclear Regulatory Commission listed five “apparent” water violations for Homestake’s uranium mill waste cleanup near Grants-Milan, New Mexico, for which the agency is dropping penalties due to a dispute settlement.

1) Implementation of the groundwater reinjection program is being carried out in a manner in- consistent with the company’s Corrective Action Program.

2) Discharge of liquid effluents from the reverse osmosis plant is exceeds the site ground water protection standards established in the license.

3) Homestake Mining Co. has failed to report to the NRC the results of all effluent monitoring required by the license.

4) The company hasn’t obtained monthly composite samples as required by the license.

5) The company has been discharging the liquid effluents with byproducts to land application areas without first obtaining Nuclear Regulatory Commission approval.

The findings are based on performance records dating from 1998 through 2015. Since Homestake Mining Co. disputed the findings and the Nuclear Regulatory Commission submitted to a voluntary dispute settlement process, the result is an accord that “does not constitute any admission” by the company “with respect to noncompliance.” The accord states that the agency and the company “agree to disagree that the activities resulted in violations.”

No penalties are being assessed and no further enforcement actions will be taken, pursuant to the accord. It just stipulates steps the company must take within 30 days to “adjust operations to better ensure compliance with the Ground Water Protection Standards.”

The steps include demonstrating that the discharge of byproduct material containing both radiological and non-radiological constituents did not impact and will not impact members of the public or the environment at the Superfund cleanup site.

The company also must obtain an independent consultant to review the “root cause” of the identified “apparent violations,” and submit the findings to the commission, according to the publication of settlement and list in the Federal Register.

In light of that release, Black Hills Clean Water Alliance, noted that “we are at a critical time in protecting water from radioactive uranium mining here in the Black Hills region,” and called for volunteers to help staff an information table at the Earth Day Expo at the Central States Fairgrounds on April 22 and 23.

“This is a really important event for us to inform people and get them to attend the EPA hearings on April 27, and May 8-11. So please help out!” Jarding said. “If you haven’t done this before, we’ll team you with someone who has. It’s really quite easy to hand out flyers and get people involved.”