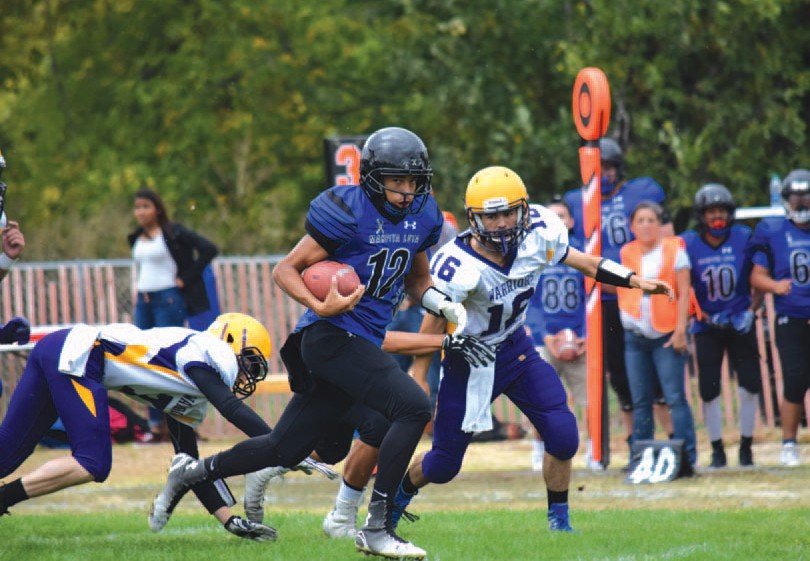 Red Cloud’s Ale Rama had a big day in every facet of the game against Bennett County.

PINE RIDGE –– “He knows his game,” Red Cloud Head Coach Duane Big Crow said about his quarterback, Ale Rama. “You can tell him what to do, but he knows it already.”

Rama made fans forget all about the loss of Russell Leader Charge last Friday afternoon, as he put on one of the finest football performances of the season, whether passing, running, tackling, or picking off a pass, and the host Red Cloud Crusaders handed an injury-decimated Bennett County team their third straight loss, 32-6. 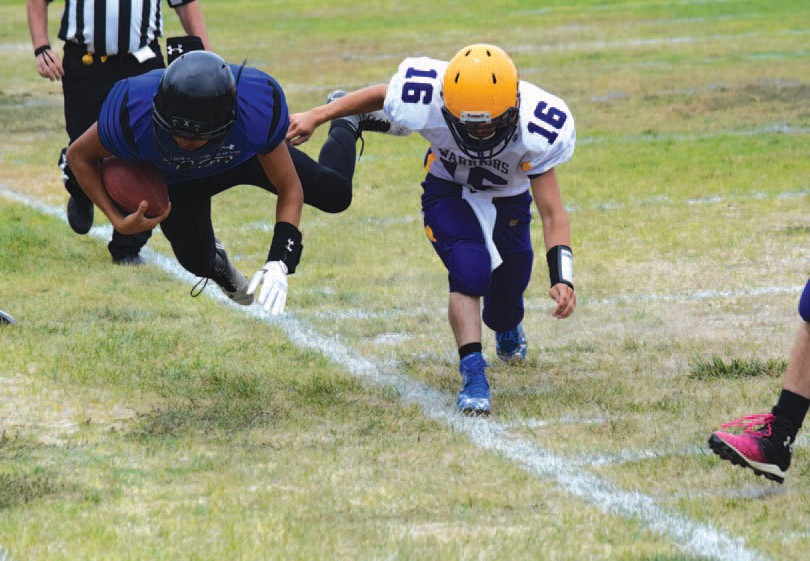 Leader Charge’s elbow injury kept him from suiting up, but Big Crow thinks the loss of maybe the best football player in the state, has made the rest of the team step up and shoulder more responsibility: “We depended on (Leader Charge) a lot last year and up at Deadwood (where Leader Charge sustained the dislocated elbow), but I think the kids have adapted to playing without him.”

Last year Red Cloud made Crusader football history by making the playoffs with a 14-player team, but this year they have added a dozen players to that sparse bench, and it is Bennett County that struggles to keep up their numbers.

“We got some things that need to turn around in the next few years,” Bennett County Head Coach Tucker Risse said. “We’re looking at low numbers (all the way down to middle school).”

Quarterback Shawn Saxton and Kurtis Mooney have been lost to injury, but the biggest loss was Brendan Kamerzell, a dependable fullback, and kicker, and a huge presence on defense.

“He just has a nose for the football,” Risse said of Kamerzell. “You don’t realize how much he does until he’s gone.”

Both teams were coming off stinging defeats, and Friday’s game left the winner with an outside shot at post season, and the loser with hopes for next year. Red Cloud wasted no time getting on the board, Rama sweeping right on a quarterback keep, and weaving his way up the field 42 yards for a touchdown. His two-point conversion attempt was stopped by the top defender on the field, Bennett County’s 6-1, 190- lbs Tyler Byrne.

“He’s an animal,” Risse said of Byrne. “He plays with a lot of heart, got a motor that won’t stop. He listens to the coaches, respects people in the community, and his teammates just love him.”

Time and again, Byrne raced from sideline-to-sideline making touchdown saving tackles, but this highlighted how much Kamerzell had been needed to hold down the other half of the field. The healthy Warriors exhausted themselves trying to plug holes in a defense stretched too thin to cope with the likes of Rama.

Bennett County’s first drive ended when Jesse Jensen intercepted Daniel Winsand’s pass at the Red Cloud 20, and returned it out to the 35. Three plays later, Rama connected with Jensen on a 40-yarder, down to the Bennett County eight-yard-line. Rama ran it in from there. The two-point conversion pass skipped off Manny Yellow Horse’s hands, out of bounds, Red Cloud led 12-0. Rama ended the quarter with 89 yards passing.

Bennett County would finally put something together in the second quarter, on a drive that ate up 7:25 worth of clock, when Winsand ran it in from the three. Byrne missed an extra point attempt, and it was 12-6, Red Cloud.

The Crusaders wasted no time in answering back, the big play being a trick pass from Yellow Horse to Rama that took a tackle by Tee Allen at the nine-yard-line to keep from being a touchdown. Two plays later, Rama found Jensen all alone in the corner of the end zone and it was 18-6.

Bennett County’s next drive ended deep in Red Cloud territory, when a pass from Allen, who had taken over at quarterback from Winsand, sailed past intended receiver Jared Harris, who had slipped and fell down. Red Cloud took over on their own 15, and eventually ran the clock down to halftime.

The second half opened with another sustained Warrior drive that went over on downs at the Red Cloud 40. The following possession would have a couple of interesting moments. After Rama completed a pass to Yellow Horse, Winsand came up and wrapped him up good from the blindside. Yellow Horse was carrying the football right where Winsand could not only have easily stripped it, but probably snatched it right out of his grip. But sometimes a player can get so caught up in football routine he misses a golden opportunity.

When a quarterback throws the football, he often leaves himself vulnerable to a hard tackle. This is why Saxton was on the sideline, because Pine Ridge’s Cecil Apple tackled him in the end zone as he was unloading the football. Big Crow expressed his concern over such a tackle on Rama, but the ref responded with, “You’re gonna lose that box.” Meaning, he had just threatened to boot Big Crow.

“Can’t say nothing’ to that guy,” Big Crow said.

Rama was going to do most of the damage with his feet anyway. On fourth-and-one from the Bennett County 38, Rama shot through a crack in the Warrior line and ran it in for a touchdown. He overthrew Riyen Carlow on the two-point attempt, so it was 24- 6, Red Cloud.

The final score of the game came with 5:18 remaining to be played. Bennett County was moving the football with Allen at quarterback, and on third-and-three from the Red Cloud 14, Allen flicked a pass over the middle intended for Seth Livermont, but defender Tabian Black Bull tipped it up in the air, and Rama snatched the interception, racing it back 90 yards for a touchdown, just eluding a finally desperate tackle attempt by Allen along the sideline. Garrett Richards caught the two-point conversion pass and it was 32-6.

Red Cloud is now 4-2, with Custer and Little Wound left to play, on the road. Custer is having a down year, and although Little Wound can move the football on any team, they struggle once in the red zone. Bennett County is 3-4, and will host winless St Francis next Friday.