Tex Janis gives Crusaders a real presence in the paint 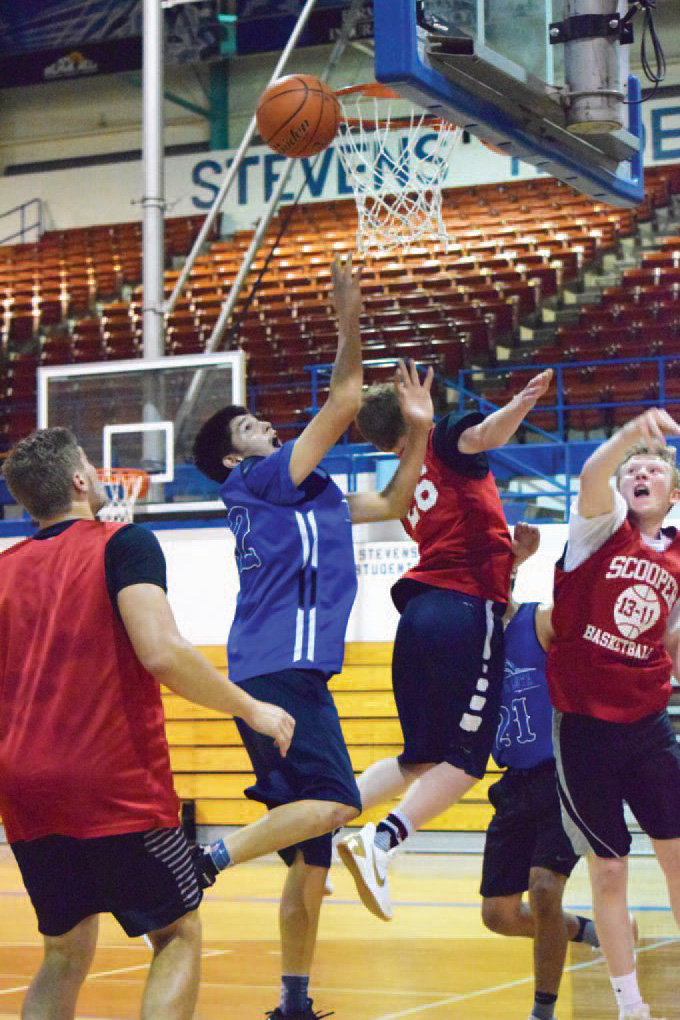 Red Cloud (in blue) and Sturgis (in red) battle hard in the paint on every shot. 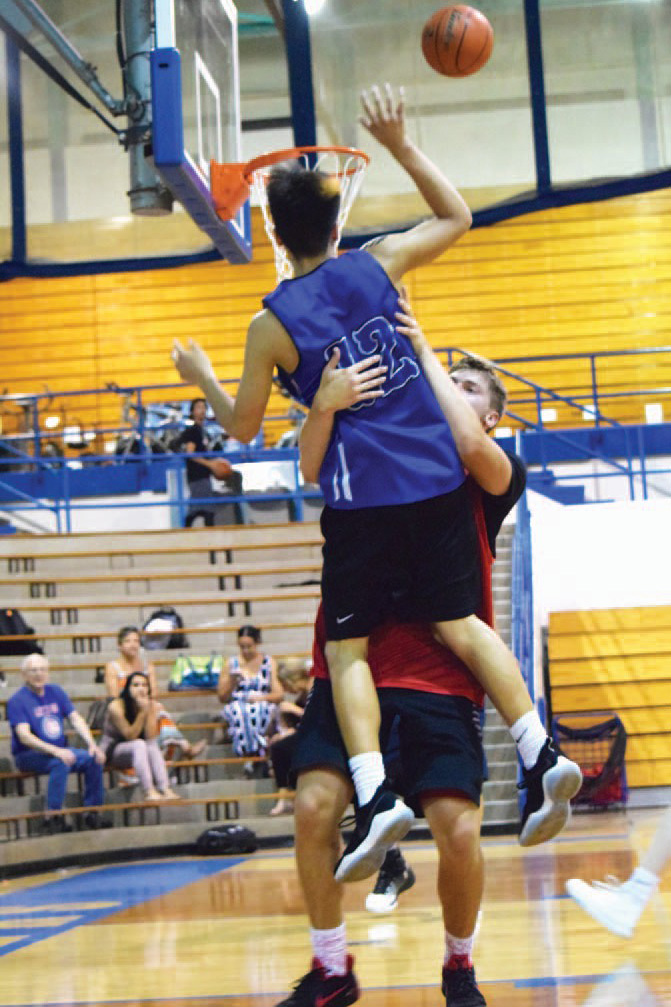 Janis might not be the tallest player in the state, but he must have the biggest feet. Given he will only be a junior next year, big feet are a strong indication Janis is not yet done growing, and when you couple Janis with Manuel Yellow Horse, Ale Rama, Jesse Jensen and Russell Leader Charge, Red Cloud is going to have a Class A team next year capable of playing with anybody. 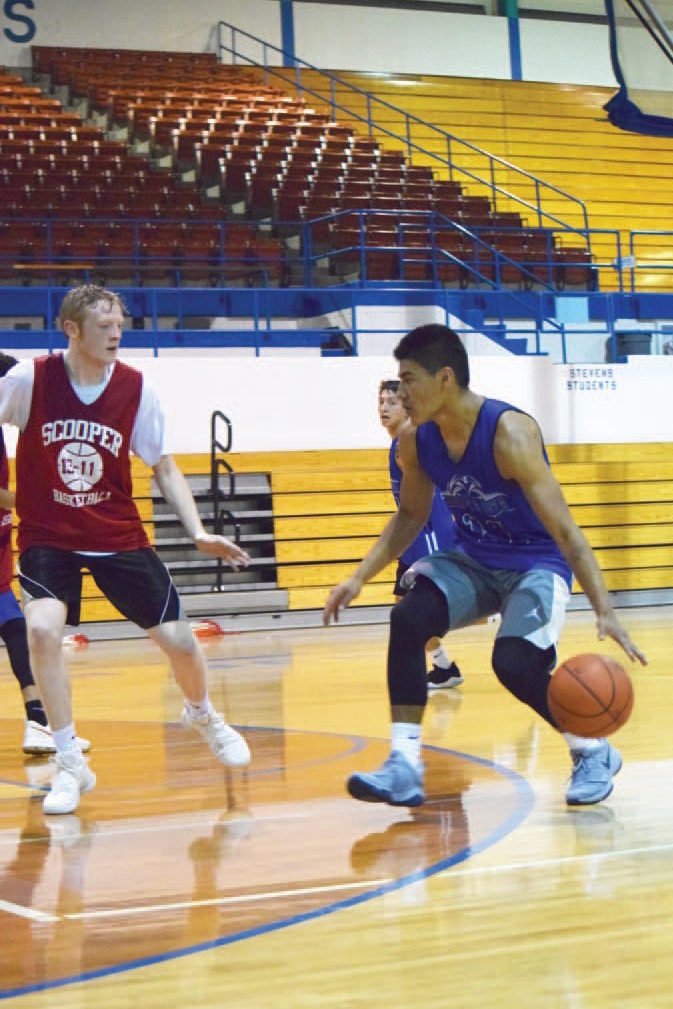 Scooper head Coach Colin McCampbell was missing his 6-5 big man, Connor Crane, and his talented shooting guard, Jace Fischer, apparently showed up late and missed the first half. That left McCampbell with some pretty good players, though, especially from three-point land in Dawson Geuke and Ryan Garland. However, he was not pleased with his team’s defensive play. Jay Krull, a hard-nosed 6-4 junior, did a great job offensively, but gave up nine rebounds to Janis.

Last year, the Scoopers had the bad habit of digging themselves a hole, and struggled when opponents came out beyond the arc and contested their outside shooting. A big defensive presence inside, namely Krull and Crane, would really help Fischer, Geuke and Garland get some separation for their shots. If McCampbell can consistently work that set-up, the Scoopers are going to make it to state next season.

But last Wednesday, Red Cloud jumped to a 5-0 lead by hustling down court and shooting and passing with complete confidence. Sturgis didn’t want to play that game, and had Fischer been on the floor at that time, he could have helped disrupt that fast pace. As it was, Krull scored inside repeatedly, to get Sturgis back within striking distance, and then Geuke hit an uncontested three to put Sturgis up 16-15, with ten minutes to play, first quarter (the Summer League plays two 18 minute halves).

With under two minutes left in the first half, Manuel Yellow Horse snatched an offensive rebound and put it up-and-in to put Red Cloud on top, 27-23. McGhee called time out, to solidify strategy for the final minutes, and at first it looked like he had wasted his breath. Geuke immediately buried a three, to make it 27-26, but Sophomore to-be, Riyen Carlow, who would have his moments in this game for Red Cloud, responded with his own three, 30-26, and then he stole the ball and took two steps into the paint for a lay-up, 32-26. Whatever McGhee was selling in that Red Cloud time out, Carlow apparently bought it.

Still not done, Carlow scored an uncontested layup following a turnover, and Red Cloud ended the half up 34-28.

Krull would own the opening minutes of the second half. He scored every point for Sturgis to bring them back to a 34-all tie with 13:20 to play.

Yellow Horse drove the paint to make it 37-36, Sturgis. But Cedric Stabber, one of two Lakota ball players on Sturgis (Gavin West is the other), went to the foul line to extend the Sturgis lead to 38-36, and then Fischer finally entered the game, after spending some time occupying a chair on the sideline. He would have a fateful impact on the outcome.

Fischer will be a senior next season, and is a unique free spirit, loaded with talent, who occasionally makes impulsive choices that land him in the doghouse. He has a signature bushy head of light brown hair that makes him easy to spot wherever he is on the floor. He is cat quick, extremely aggressive, not above chest bumping his man or grabbing his shirt, and would excel at rez ball were he ever turned loose with it. But he is undisciplined and inconsistent, and working those two kinks out will be the challenge for Mc- Campbell next season.

Down 49-44, with two minutes remaining in the game, Krull came through inside for Sturgis and made it 49-46. Then Garland picked Rama clean, and zipped back to the basket for an uncontested layup, and Sturgis trailed by only 1, with 1:35 left to play.

Enter Fischer. He stole the ball, made a hugely aggressive, acrobatic play for a layup in the paint, but Rama rose to the challenge, maybe fired up and trying to make up for his bad play with Garland, and as their bodies twisted and collided in the air, the ball teased about the rim, and eventually fell away. Leader Charge snatched up the loose ball, raised up the court, fired a pass to Jensen, and then Jensen was fouled and went to the line. He hit both free throws and Red Cloud was back up, 51-48.

Leading Sturgis by three with seconds on the clock plays right into their wheelhouse. They love the outside shot, and they can hit it better than any team in the summer league.

Enter Fischer. He intercepted the ball with 35 seconds left, raced up court, having beat every player deep, pretty much free to go in for an easy lay up, or pull up for an uncontested three. But he took his focus off the dribble, and his toe kicked the ball forward, and it raced away from his fingertips and out of bounds. That ended the Scooper chances. Fischer’s momentum forced him way past the baseline, and extremely frustrated, he slammed his fist hard into the folded-in bleachers. Rama would hit two more free throws before the game ended, 53-48.

Given this was just a summer league game, basketball this hotly contested and entertaining indicates next season could be a banner year for exciting West River rivalries. Red Cloud plays Sturgis every season, and it will be interesting to see Crane and Krull battling in the paint against Yellow Horse and Janis.