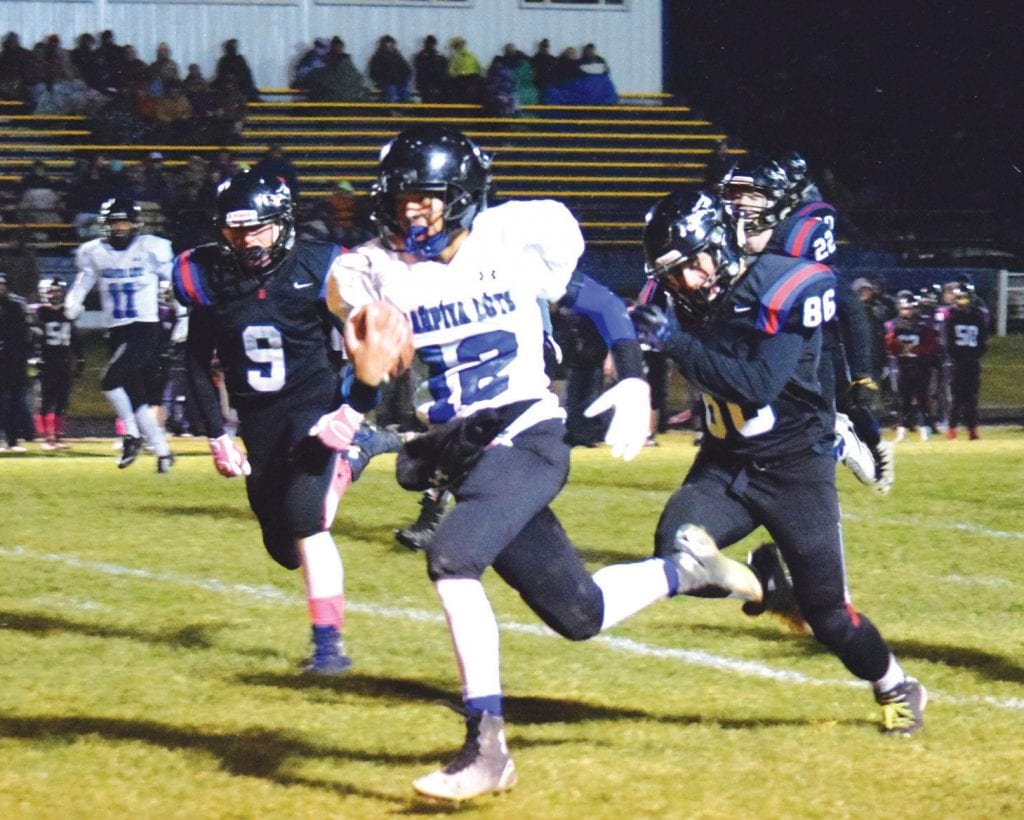 In the final minute of the game, Red Cloud’s Ale Rama was finally able to knife through the Black Hawk secondary for a touchdown.

WESSINGTON SPRINGS—A cold, relentless wind buffeted the Red Cloud school bus all the way from Pine Ridge to East River last Thursday. And once the Crusaders got to Wessington Springs, the Blackhawks buffeted them from one end of the football field to the other, cruising to a 60-6 shellacking, that ended the Red Cloud season at 7-3.

At one time Wessington Springs was a 9-man football program, and as the Spartans, they were quite competitive. Stepping into the ancient Wessington Springs High School, is like stepping back into the 1940’s, but old as it is, the building is well maintained. This exactly describes the football field three blocks east. 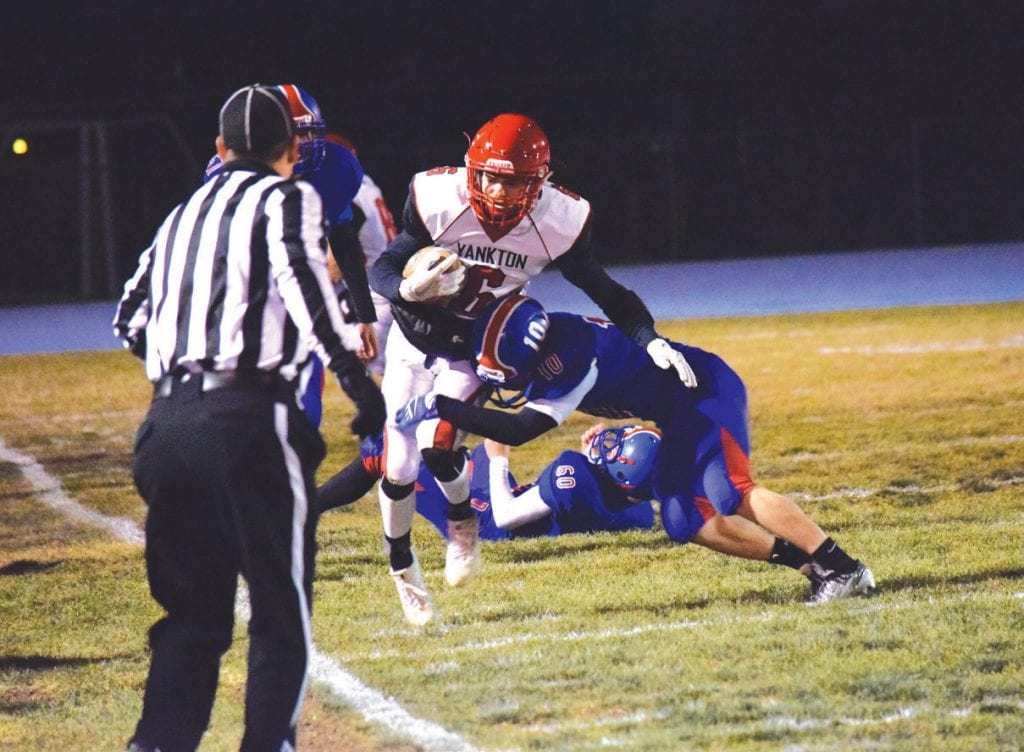 Chance Sorenson of Douglas drives Josh Galvan-Hofer out of bounds.

Declining enrollment forced the Spartans to cancel their existence, although the Spartan logo is still seen around town, and at the high school. They became the 11-B Woonsocket/ Wessington Springs/ Sanborn Central (WWSSC) Blackhawks. They also play three homecoming games, one for each high school. 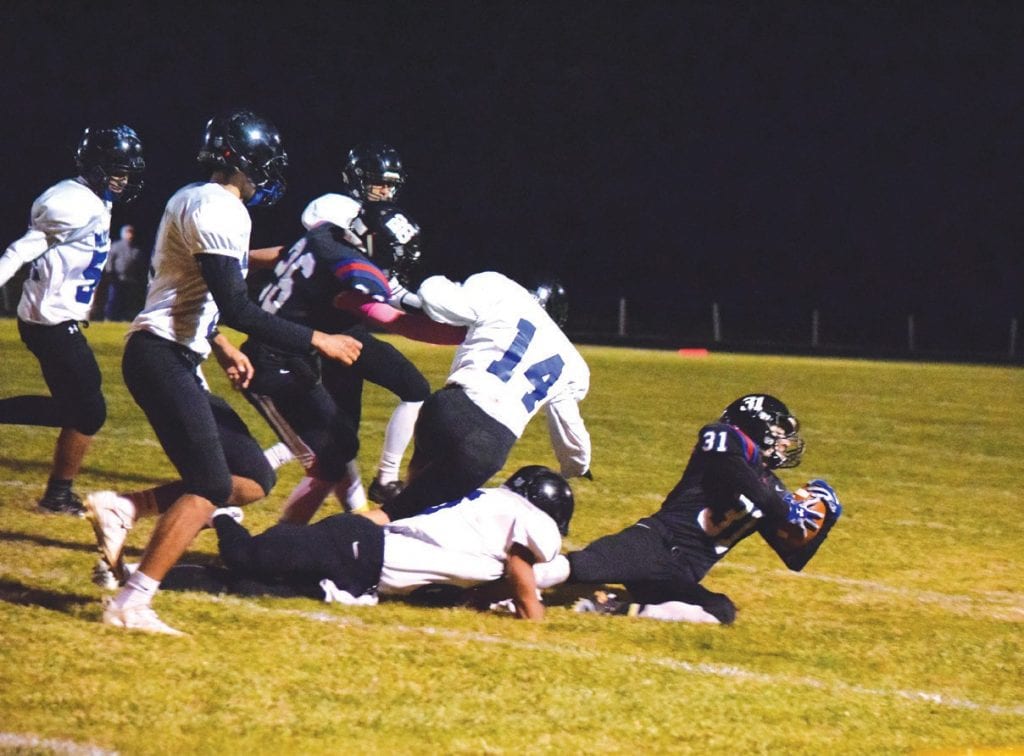 The Red Cloud line struggles to bring down the Black Hawks’ Trey Ulmer.

Red Cloud Head Coach Duane Big Crow knew what was coming against the Blackhawks, but he really couldn’t tell his charges that. He wanted them positive, determined, ready to block and tackle with WWSSC.

“It wasn’t the outcome we wanted,” Big Crow said. “But that’s what happens, when you get bullied out there on the line.”

WWSSC wasn’t bigger than Red Cloud, but they had put in the off season time, getting buff by pumping iron. On their first play from scrimmage, after Red Cloud punted into a fierce wind, giving the Blackhawks great field position at the Red Cloud 34, WWSSC went off tackle, and senior John Witte romped untouched to an easy touchdown, no defender within twenty yards of him.

This was the formula for the whole game, a great line block to open a huge running hole, no tacklers to bring them down except far downfield. On defense, the Blackhawks put on a tackling clinic for the Crusaders, showing them time and again, great tackling is about being aggressive and willing, about being drilled and re-drilled on how to ward off blocking and wrap up a ball carrier.

“We went over this all week,” Big Crow said. “We told these guys you can’t just stand around, you need to help out, and they just never did help out.”

One particular play stands out, when the elusive Ale Rama dropped back for Red Cloud, a big blocker between him and Tyler Eddy, a 5-10, 178- lbs freshman. Eddy knifed past the blocker and collected the ankles of Rama, dropping him where he stood. No defender had been able to do that to Rama all year long, and Eddy is a freshman.

The entire Blackhawk team is like that. Highly effective players, who will be back next year, and the year after that. This team will bring the same level of blocking and tackling back with them, and until the Crusaders get down into the off season weight room to build the mass and muscle to line block, until they learn to pursue and wrap up on defense, they can forget about any outcome except mercy rule. That goes for almost all of West River.

“We just need to keep grinding away,” Big Crow said. “We can tell them all we want that they need to (lift), but it is the individual that has got to do it.”

Big Crow was still proud of his team for the year they have had: “I like what we did, (given) what we went through at the beginning of the year losing (Russell Leader Charge). This season has been great, and I don’t really have any regrets at all.”

Leader Charge would have been the top back in the state, but a dislocated elbow cost him most of his senior season, and when he came back, he was still blazingly fast, but he could not read the field as well, and he could not break tackles like before. Last year, even against tough East River tackling, he shredded tacklers and had five yards before any tackler could get help to wrap him up.

Rama had a sensational year passing, running, kicking, and especially defending. Had he had some blocking in Wessington Springs, he would put up some crooked double-digits against the Blackhawks. Rama will be back next year.

BOX ELDER—There was dead calm around Dave Broadie Field Friday night in Box Elder. It was cold, but the gale force wind from the night before was far to the east. Yankton had turned their bus around Thursday morning, unwilling to fight that wind all the way to Rapid City. But when they got here, they took to the air, and the arm of senior quarterback Garrett Tennant, had them up 17-0 until the closing seconds of the first half.

Senior running back Trevor Severson ran it in from the one, extra point kick good, and the Patriots went into the locker room down, 17-7.

After the Patriots punted to start the second half, the Bucks put together a flag-hampered, up-and-down drive that eventually ended when Ray Wermers bulled it in from three yards out. The extra point was no good, and it was 23-7, Yankton.

The Patriots eventually had a great goal line stand, and took the ball over on their one. On second-and-six from their 24, Severson fumbled, defender Casey Krejci scooped it up and rambled to pay dirt. The 2-point conversion was good, Yankton was now up 31-7.

Douglas started the final quarter with a first-and-ten from their 45. Quarterback Dan Hand hooked up with Chance Sorenson who scampered down the sideline for a touchdown. Douglas Coach Dan Maciejczak hollered “Alabama 57 eagle!” Whatever that entailed for the 2-point conversion, it failed, and it was now 31-13.

Yankton came right back and scored anyway, and that produced the final score of 37-13. Not a bad year for the Patriots, but in the end, they lost for the same reason most West River teams lose, they just couldn’t block and tackle with the Yankton Bucks for four quarters.