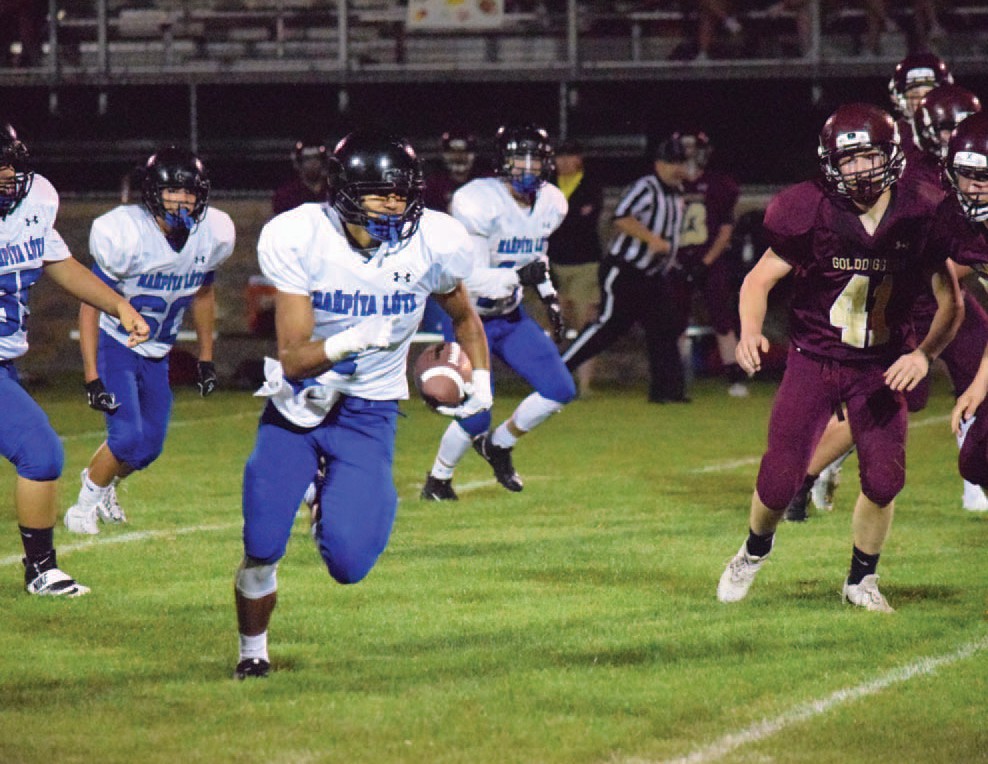 Russel Leader Charge out-paces his blockers as he cuts around the end of the Lead/Deadwood defense.

DEADWOOD –– “We bent and broke a little,” Red Cloud Head Coach Duane Red Cloud said of his team’s 46-32 road win over Lead/Deadwood last Friday night at Ferguson Field. “But they stayed together, the defense stepped up in that fourth quarter and they played tough.”

When the explosive Russell Leader Charge took the hand-off and cut left, on the first play of the game for Red Cloud, and rocketed 95 yards up the sideline to pay dirt, Lead/Deadwood Head Coach Tom Tieszen recalled what had happened last year, and was not panicked.

Despite a sprained ankle, Jesse Jensen returned to the game and made enough big plays to be the game’s MVP.

Red Cloud had defeated Lead/Deadwood in a double overtime thriller, and Leader Charge had had a huge game, but the Diggers were in it to the very last second. Still, Tieszen’s sensible plan to keep the ball away from a kid doesn’t work if he zigzags his way to daylight on the first hand off.

Things had started so well for Tieszen, too. He had squib kicked to open the game and Wakinyan Catches muffed the recovery. The Diggers took possession on Red Cloud’s 49-yard line, but had to punt after moving the ball to the Red Cloud 45. Brigham Williams punted it down to the five. That’s when Leader Charge took it to the house, two-point conversion no good, Red Cloud led, 6-0. 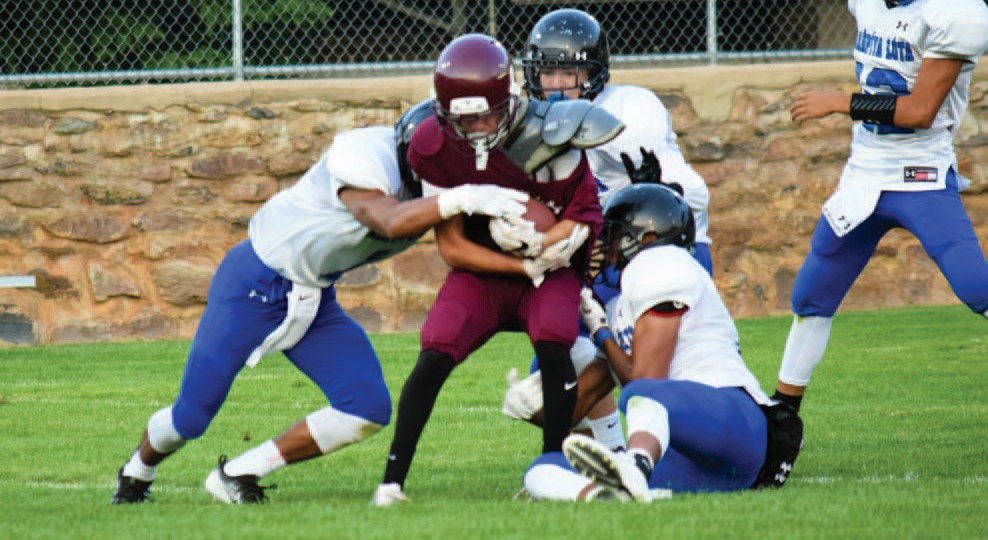 Ale Rama had a nice kick off, but Chris Lipp had a big return out to midfield. An illegal procedure penalty proved the difference in Lead/Deadwood not getting the first down. On fourth-and- four the Diggers punted from the Red Cloud 42. Four is a sacred number to the Lakota people, and there were just too many fours factoring into that outcome. Tieszen wanted Big Crow to wonder whether he was going for it or punting, and at the last second Williams again punted, and this time it was blocked, ricocheting back from a forest of Red Cloud arms, and as fate would have it, the ball bounced right into the hands of the last man the Diggers wanted to touch the football, Leader Charge. He stopped running 68 yards later. The two-point conversion was no good, Red Cloud led 12-0, after having run exactly one play.

Rama again booted a pretty good kickoff, but this time Jordy Stulken brought it back right up through the gut of Red Cloud coverage, spinning and twisting his way down to the Red Cloud 38- yard line.

Last year, Lead/Deadwood QB Zach Murray shed tears after the double overtime loss, because he had played his heart out. Now a senior, he was bigger, stronger, faster, and he proved it by smartly moving his team up the field before running it in from ten yards out. The two-point conversion was no good. Red Cloud led, 12-6.

When you establish the run, good things happen with the pass. Murray proved this after Dylin Johnson had some big carries to open the second quarter. Stulken went deep into the corner of the end zone and Murray fired a beautiful pass 26-yard pass right on the money. Murray was tackled shy of the two-point conversion and the game was knotted up, 12-12.

On the next possession, Dylan Janke was forced to solo tackle Leader Charge after he had already gained 19 yards. The ref called Janke for a face mask which tacked on 15 more yards and Red Cloud had the ball at the Digger 30. A 20-yard sweep from Leader Charge eventually got it down to the ten. From there, Rama lobbed a corner pass to Jesse Jensen for the TD. Dylan Janke tackled Rama shy of the two-point conversion, Red Cloud led, 18-12.

The Red Cloud defense forced a punt on the next possession, and it was a good one, the Crusaders taking over on their 24-yard line. Rama was sacked for a four-yard loss. Next, a lob pass went off Manny Yellow Horse’s fingertips. Finally, Rama rolled right, and under heavy pressure fired a long bomb downfield to Jensen who caught the ball just as he was wrapped up by two defenders— except he wasn’t! Jensen tore loose, his black shoulder pad yanked free, bouncing wildly against his white jersey, and the Diggers weren’t able to gang tackle him to the turf until the ten-yard line, an 80-yard pass play for Red Cloud.

Two plays later, another corner lob pass from Rama to Jensen resulted in a TD, this time Jensen having to reach way out to pull the pass in, his toes flush against the end zone line. The two-point conversion failed, it was 24-12, Red Cloud.

The Diggers weren’t about to fold up the tent. Johnson had a terrific kickoff return, stopped from breaking it wide open when Yellow Horse got a handful of his jersey, and flat on his back, Yellow Horse held the leg-pumping Johnson in place until help arrived to bring him down. Lead/Deadwood took over on their own 44- yard line but play was halted because Jensen was down, having rolled his ankle. He was eventually carted off in a fireman’s carry.

Murray overthrew Stulken on a long pass, but since he had been wide open, Murray went right back to the same play, and this time Stulken caught a 56-yard TD pass. Two-point conversion no good, Red Cloud still ahead 24-18 at the half.

Tieszen open the second half using the running talents of Dylan Janke and Jacob Alley to take advantage of a four-yard mis-kick from Rama. It took less than two minutes to knot the score up, 24-24, on a six-yard TD run by Alley.

On the next possession, woes continued for Rama, as he cut up-field for a 25-yard gain, before having the ball stripped from him at the Lead/Deadwood five-yard line. This is the stuff defeats are made of, the momentum had clearly shifted to the home team, but Rama made good his fumble, by intercepting a third-and-eight pass from Murray and returning it back to the five.

Leader Charge swept left and scored easily on the next play. The two-point conversion pass from Rama to Garrett Richards was good, and Red Cloud was back on top, 32-24.

The Diggers offensive line took over, and they helped maintain a five-minute drive that eventually ended when Murray scored on a two-yard QB keep. Dylan Janke bulled his way in with the two-point conversion, and the score was tied up again, 32-32.

Lead/Deadwood’s defense got them the ball back to start the final quarter, and they drove the ball down to the Red Cloud 26-yard line. Their offense was clicking, and a go-ahead TD seemed probable, but Jensen was back on the field, his ankle tapped, assuring Coach Big Crow he could play, and he proved it by intercepting Murray’s next pass and running it back 15 yards to his own 35-yard line.

The next possession would be Red Cloud’s finest. John Jones almost intercepted Rama, by the skin of their teeth Red Cloud kept the ball moving, until finally Rama ran up the gut from the 17-yard line of Lead/Deadwood, but was pulled to the ground by a horse collar tackle from Wyatt Hess at the four. Penalty was half the distance to the goal. Leader Charge then lost 4 yards, and then gained nothing on the next hand-off. Rama was tackled for a six-yard loss. Onfourth-and-goal from the 12, Rama fired a bullet pass over the middle to Riyen Carlow who hung on for the TD. He fired another bullet pass to Jensen for the two-point conversion. Red Cloud led, 40-32.

The Red Cloud defense was now fired up and shut down the Diggers. Rama scored another touchdown, and Leader Charge dislocated his elbow after being gang tackled. The elbow popped back into place. The game ended 46-32, and Red Cloud was halfway to doing what they had set out to do, not start 2017 like they did 2016, two games in the hole.

Big Crow wanted to credit his offensive line: “They hung in there and they gave Ale the time to throw that ball, and they opened some holes.”

He does want the defense to work on wrapping people up: “When we went up 12-0, I knew they could come back because we weren’t tackling at all.”