Remembering the blizzard of 1949 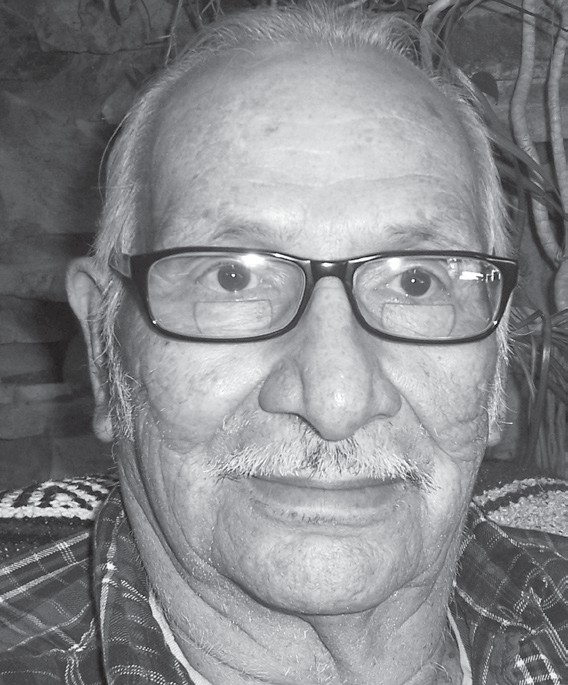 We are in the holiday season were families make a point to get together and spend time together and eat. This makes me think of old times when food wasn’t always plentiful like during the 1949 Blizzard. Looking back prior to the 1949 blizzard we lived about 6 miles from Redshirt village which had a school.

World War II was going on and the funding for bus service was stopped. Gas was being rationed so my older sister Margaret who was 10, my brother John Jr. was 9 and I was 6 years old. People were struggling just to live. We all went to Pine Ridge Boarding School for 2 years 1945-1947. In 1947 a new school was started at the Redshirt village it was an Adventist School.

Finally the war was over and people were starting to get ahead. My father rented Charlie Steel’s house in Redshirt Village for 10 dollars a month and we lived there for 2 years only during the school year and went to school. During the summer, we would move back on the table and plant a garden we would harvest and mother canned the produce.

In 1948, father bought a new 1947 jeep called Willy’s Overland it was a demonstrator it looked like an army jeep. Father had a two-wheel trailer he used to get wood. He stocked piled wood high at Charlie’s house for the winter. He was always thinking ahead. During the winter of 1949 it snowed for four days straight with high wind and we were still living at Charlie Steel’s house. After it stopped snowing on the Southside of the house the drift went all the way to the roof. We were stranded. I remember we had to shovel everywhere. Shovel a path to the outhouse and around the wood pile. We had to melt snow for many days because the hydrant was under snow. I often wondered how some of the families did on wood.

I can remember two of my uncles Ed Two Bulls and Ed Fast Wolf had real big wood piles. I know in the weeks after the storm a cargo plane flew real low and dropped food within walking distance for the community. We made it to where they dropped the food the whole community was digging through the snow. We all were there picking through the food. Everyone was mindful of one another’s family size and no one family got more than the others.

My parents had a cellar full of canned stuff and other garden produce on Redshirt table but we were stranded in Redshirt village and no way to get to it. The others in Redshirt village had gardens and cellars so I think they were able to get to their canned food. I remember father put chains on the tires of the jeep and he could get around hitting the high spots. From the village down the river east there were a lot of dead cattle. Some of the cattle they didn’t find until spring when all the snow melted. The Cattlemen’s Association lost a lot of cattle.

I never did ask but father said they had 1300 head unit. It was never fully stocked. Father had 38 cows left and I don’t remember how much he had prior to the blizzard. The following year we stayed in the West end of the school house in one big room. I remember looking through the Sears Roebuck catalog and I would wish for some combat boots that had 2 straps on the top, cleats on the front sole and a pocket on the side for a pocket knife. Father said if I gathered up the bones along the river he would take his trailer and haul them to Rapid City and sell them. He had to put a little money in and I got my boots. I don’t know what part the 1949 Blizzard played but by 1954 almost all the cattle were sold off and life was never the same in Redshirt. Several families moved away and father got another loan and he bought more cattle and had a 175 head unit. He never fully stocked and now there are very few of us left of that community that lived through those hard times. I remember my father bought a four-wheel trailer and was able to haul 12 foot logs. I imagine people prepared for the winter differently after the blizzard.

There are very few of us that lived through the 1949 blizzard that are still living ranged in age from infants to 14 years of age. Here are the ones that lived in Redshirt community that I could remember. My cousins starting with the oldest Bob Two Bulls, Florence Ten Fingers, Francis Two Bulls, Delbert Yellow Horse, Elmarie Yellow Horse-Boyd and Julia Two Bulls-Garnier who was about 3 years old when it happened. Also Evert Poor Thunder was my brother’s age and his sister Edith was the same age as my sister Margret and Ethel was about my age who lived on Redshirt table. Silas Sound Sleeper also lived on the table. I hope I haven’t left anybody out. Were at least 5 years old and older when the blizzard took place. Doris Two Bulls was about 2 years old I am not sure if she would remember anything from the blizzard but maybe she heard stories as she grew up. There are so many stories connected to this 1949 Blizzard and this is my experience from a nine year old’s perspective. As I spent Thanksgiving with my family with plenty of food to go around, I can’t help but think of the 1949 Blizzard when food was scarce.

I hope this story reminds you of how important family is and even when times are tough the most important thing is that everyone is together and doing ok. I often wonder how many people who lived through the 1949 blizzard shared their experiences with anyone, I know I didn’t until now. We should all make a point to tell our loved one, especially our young, some of the stories we lived through as we grew up. It will not only be entertaining but it will give them some history, their history. Enjoy the Holiday Season with your loved ones.