Responding to the ‘Martin Mudslingers’ 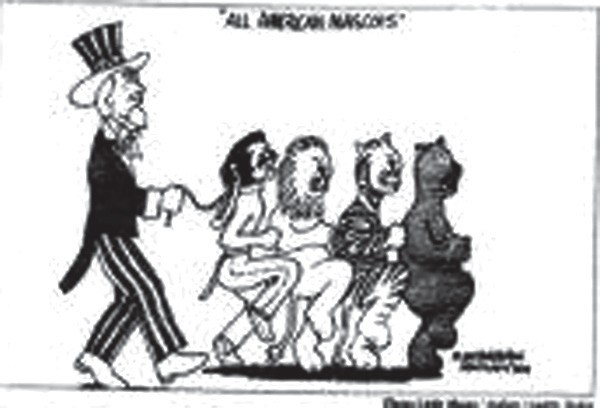 Last week Jim Kent, Chief of the Wannabes, and Marty Two Bulls, a cartoonist and failed newspaper publisher, decided to throw a handful of mud at our retired publisher, Tim Giago. When we asked Tim if he was going to respond to them he just laughed and said, “There is an old saying that goes “Never get in a pissing contest with a skunk” and in this case we have two skunks.

Our Editorial Board decided that the lies told by Kent and the totally ignorant cartoon by Two Bulls did need a response. First of all who are these two mudslingers?

Jim Kent was a former writer for the Rapid City Journal. He wrote one of his poison pen columns attacking Tim and Native Sun News while praising to high heavens the Martin-based newspaper he was writing for, but he neglected to tell the editor of the Rapid City Journal that he worked for the paper he was bragging about while he considered the paper he was running down to be a competitor. In the newspaper business this is called “non-disclosure.” When the editor of the Journal discovered that Kent was working for the paper he praised and condemning a paper he considered a rival, he fired him. He accused Kent of being unethical.

Kent ranted and raved against the Journal for firing him for several weeks without revealing why he was fired. I guess he never considered himself to be “unethical.” He excused his latest harangue against Giago by saying, “I called him and he didn’t answer.” Just to be on the up and up a member of our Editorial Board emailed Kent before helping to write this editorial. Just to put things in perspective Kent is a white guy who knows very little about the history of Wounded Knee or he would not have written such a stupid article about it. Here is a little history Kent did not know. In 1976 the Oglala Sioux Tribal Council sent a delegation of traditional tribal leaders led by the Spiritual Leader of the American Indian Movement, Chief Fools Crow, to Washington to meet with President Gerald Ford in an effort to raise $4 million dollars to buy Wounded Knee. Was the Council or their delegates being greedy?

In 1990 Celeste Not Help Him and several descendants of the Wounded Knee Massacre and several Oglala elders testified before a Congressional Committee in Washington in an effort to raise $4 million dollars to buy Wounded Knee with the hopes of building a lasting Memorial Monument there. Were they being greedy? According to the erroneous reasoning of Jim Kent, yes they were.

We first suggest that Wannabe Kent and Cartoonist Two Bulls learn a little bit about the history of the tribe and the people that tried to buy Wounded Knee long before Tim ever gave it a thought. As for Mr. Giago, he has decided to move on to other projects so Kent and Two Bulls can put away their poison pens. They certainly are not going to learn about “ethics” at the newspaper where they now hang their hats.

(Contact the Editorial Board of Native Sun News Today at editor@ nativesunnews.today)