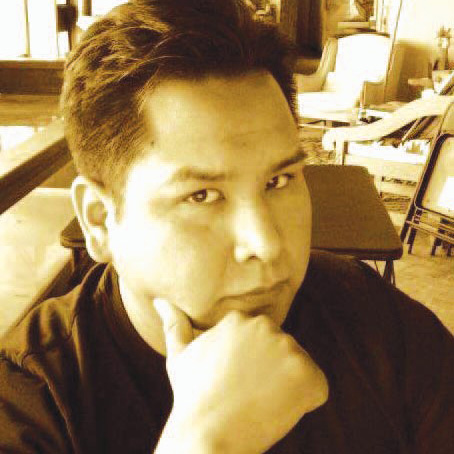 Bryan Parker (White Mountain Apache, Muscogee Creek, Mississippi Choctaw) knew it was his time and the right fit. When he learned of the position opening for the Rolling Rez Arts coordinator for First Peoples Fund, he was ready to get involved in the Native arts community on a deeper level. Rolling Rez Arts delivers state-of-the-art mobile services, including arts space, banking, retail and business training, to the Pine Ridge Reservation in South Dakota.

“I’m excited about being a part of a great program,” says Bryan, a painter and filmmaker. “Rolling Rez Arts prepares artists to go out into the world and be professionals.”

Jeremy Staab (Santee Sioux), First Peoples Fund program manager, knows it’s important that Bryan has the dual perspective of a practicing artist and an administrator. “Bryan’s a perfect fit for the position,” Jeremy says. “He really aligns with the mission and where the Rolling Rez Arts program is going to go. He wants to see people, and especially artists in the (local) community, succeed.”

After starting his new position in February 2017, Bryan went into the Pine Ridge Reservation community to introduce himself, to let them know about the Rolling Rez Arts mobile unit program. There is a lack of communication and technology to spread the word. He’s using the radio station, posting flyers, and going out to meet people.

“I can’t wait for the classes to start,” Bryan says, “to be immersed in everything creative and everything that is the arts, Native arts and culture.”

Originally from Tulsa, Oklahoma, Bryan enlisted in the army at age 22. Honorably discharged in 2005, he enrolled in the Institute of American Indian Arts (IAIA) the following fall. He graduated in 2010 with a bachelor’s degree of fine arts in moving images.

While in Santa Fe, Bryan met his future wife, Molina, and when they were dating, she came across his sketchbook. She encouraged him to pursue 2-D art, and Bryan started painting and drawing more. A year after graduating from the IAIA, Bryan and his wife, Molina, moved back to Rapid City, where she is originally from. Molina was a First Peoples Fund artist fellow last year. Through their networks, he met other artists and learned what it means to be a professional, which motivated and inspired him to branch out.

Bryan has taken his art seriously the past five years, perfecting skills and putting himself and his work out to the public. Emotional energy gets pulled into his pieces, an extension of his personal well-being that gives life to the piece. The subjects in his work are mostly detailed portraits of iconic Native American people.

“They (FPF) are really reaching people on an individual level,” Bryan said. “They are hoping those individuals will reach out to their communities to do something great, to continue to do something great. Everyone wins in that mission and that goal. The individual wins, and then the community and, of course, the future generations because they’re getting all of this great knowledge.”

“They (FPF) are really reaching people on an individual level. They are hoping those individuals will reach out to their communities to do something great, to continue to do something great. Everyone wins in that mission and that goal. The individual wins, and then the community and, of course, the future generations because they’re getting all of this great knowledge.”

Bryan sees how First Peoples Fund programs not only preserve Native cultures through art but are also bridging communities together to accomplish one goal — bettering Native communities.

Coming on board with First Peoples Fund as the Rolling Rez Arts coordinator, Bryan started compiling a list of artists who could teach on the mobile unit this spring and summer. He’s scheduling classes, getting contracts signed, and gathering supplies.

Bryan grew up in the Methodist church in his Oklahoma community, where he organized fundraisers and community work with Natives and non-Natives. When he married, he found out his wife’s family did a great deal of community outreach through the Episcopal Church, which led to ways for Bryan to give back to the Native communities. Working with First Peoples Fund is now an opportunity to be involved from the artists’ side as well.

Bryan not only looks forward to working with emerging and established artists but also artists who are overlooked talents. Quality classes will help build great relationships with the community and teach the artists skills they can apply and then pass on to their families, their neighbors and their communities. Bryan says, “Even though I have been out there myself in the art world, in the Native art world, I can easily relate, like I’m one of those artists still learning the business and how to conduct myself as a professional artist.”

Bryan thinks people would be surprised to learn how deep First Peoples Fund runs through these communities. “I wish people knew about the spirit and energy that’s behind First Peoples Fund, how deeply involved the organization is in preserving culture while celebrating the contemporary side of art and life,” he says. “I’m amazed with how much I’ve learned, how much I was unaware of. When you think of an organization like this, you think it’s just to hand out grant money, but it’s more than that. Artists are more cared for. More celebrated.”

When he’s not working, Bryan spends time with his family and painting. Art is therapeutic for him. He likes to get locked in his paintings and see what comes out of himself.

He’s had a lot of experience speaking with veterans who do different kinds of therapy. Though his war trauma isn’t as severe as others, he has found art is healing and helps balance the anxiety that comes from traumatic situations.

Above all, Bryan’s world is his wife and their 2-year-old daughter. “I’ve learned a lot from my daughter — how to be a better person, values like patience and compassion, how to love myself more, and to enjoy this crazy ride called life.”