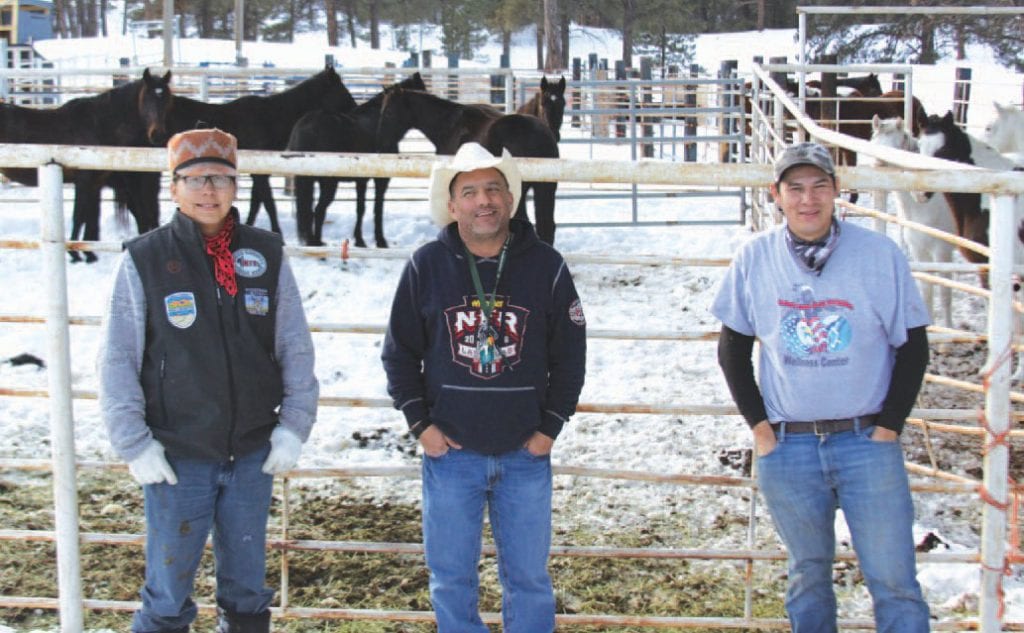 Left to right: Justin Whiteman, Gene Small, Director Northern Cheyenne Land Authority, and Steven Littlewhiteman with some of the feral horses gathered on the reservation.

LAME DEER, Mont. –– Reminiscent of old western days, the Northern Cheyenne Tribe has been conducting a round-up of wild horses, clearing tribal range near public roadways for public safety reasons. In late January, the Northern Cheyenne Land Authority (NCLA) began clamping down on loose horses wandering around the Northern Cheyenne Reservation, capturing such strays, impounding them and even planning to sell those which are not claimed under certain conditions. In doing so, NCLA is enforcing Ordinance No. DOI – 005 adopted by the Tribal Council late in 2016, enacted to enhance public safety due in large part to the traffic hazards which loose horses have caused on major reservation roadways.

According to Ron Burn NCLA compliance officer, there have been multiple horse/vehicle collisions in the past years on major tribal roads, twelve of which he personally knows about, including three involving public school buses.

Because horses are tall and can weigh over a ton, vehicle and horse collisions are especially dangerous, the animals often flying through the windshield upon impact, said Sterling Small, Injury Prevention Specialist for the Northern Cheyenne Tribal Board of Heath. “Hitting a horse at highway speed is very dangerous,” he said. “These accidents often occur at night when dark colored horses are very hard to see on or near the roadways.”

In recent years, loose and unclaimed horses have been the cause of several highway accidents, especially on Highway 212 (crossing the reservation), Route 39, (from Lame Deer to Colstrip) and the Birney Road. In the past few weeks of enforcement, the NCLA with the assistance of some reservation cowboys; Gene Small, NCLA Director; Ron Burns, Compliance officer; Justin and Steven Littlewhiteman, rodeo cowboys have recently gathered and confined 55 loose horses. Those animals are compounded at tribal property, available for inspection and can be claimed by individuals who provide proof of ownership, pay an impound fee of $250.00 and $50.00 per day for costs of feed and maintenance, those funds going back to NCLA for associated costs. If not claimed, the horses will soon be sold.

The ordinance, while understandable for contemporary public safety reasons flies in the face of tradition. While an estimated 200 loose or unclaimed horses frequently are found on reservation town sites and around reservation roadways, several thousand additional feral horses inhabit the more remote reservation lands, said Gene Small, NCLA Director. “We can probably round up many of the “town or road-side” horses with four-wheelers, old-time horse roundups, etc.”, but addressing the larger problem of feral horses on remote reservation lands will be much more difficult, because we have a very large and rough country, and limited means to capture or handle those horses. Those are very tough horses and this is big rugged country, so such a round-up could get pretty western” he predicted.

Due to the lack of a market for “canner” or loose horses for the past several years, the Northern Cheyenne reservation has become a “dumping ground” for some horse owners off the reservation, Small said. In addition to local horses which have escaped captivity and then bred to larger numbers, it is commonly known that non-Indians have dropped off unwanted horses as few other alternatives to old or unwanted horses have been available in recent years. “It is hard to say how many feral, unclaimed horses are roaming on remote reservation lands,” Small said. “But the estimates run into the thousands. Those animals are using up a lot of our grazing resources. While you might find a good one among them, they are generally not well-bred or papered stock.”

The Northern Cheyenne, like the Sioux (the Lakota and Oglala) have always been and will always be horse people. Horses were then, and are still a source of personal wealth and pride to many Cheyenne people, especially those of traditional persuasion. In the brief, but great era of freedom during the 1800’s upon the plains, horses, called by the Cheyenne “elk without horns” offered great mobility, freedom and options to the warriors and hunters of the Great Plains. Those vast Cheyenne horse herds were free roaming, subsisting upon free grass, then loosely managed by Cheyenne herdsmen of old. It has been common for tribal members to run horse herds on tribal or personal allotted lands, as even today, many tribal people still hold horses holy, in kinship with their four-legged, stronghearted and fleet-of-feet brothers.

Yet, times have changed. The vast prairie lands which in yester yore supported vast tribal horse herds are no longer available to the Cheyenne people for free horse graze, the people and animals now confined to limited space, within reservation boundaries. That poses problem to non-land owner horse lovers and owners who still want to have horses though they do not have the corresponding land, pasture or grass to support them.

The Tribe owns the vast majority of tribal lands, much of which is suitable for grazing. Those lands are bid out, primarily used for ranching and cattle production, based upon grass resources which will support a certain number of animals. Grazing revenue is a primary source of income to the Tribe. Feral horses encroaching upon those range units diminish that capacity which can lead to overgrazing, natural resource damage and then the lessors of those lands then do not get full utilization of their units. “This is a unique “Indian” problem,” Small remarked. “We are and always will be horse people. The difference now is that you have to be able to afford to own a horse, have a place to keep it and take care of it.”