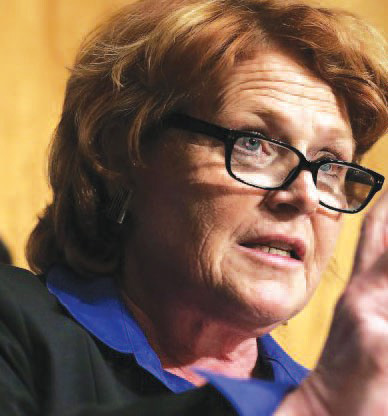 WASHINGTON ––U.S. Senator Heidi Heitkamp led a bipartisan group of 17 senators in commemorating the important work of educators, students, and higher education professionals at tribal colleges and universities nationwide by introducing a bipartisan resolution designating this week as National Tribal Colleges and Universities Week. The resolution passed unanimously in the U.S. Senate.

In dedicating this week, the senators recognized the tribal college communities operating on more than 75 campuses across the country which offer exceptional opportunities to Native people in some of the most disadvantaged and isolated parts of the country. In North Dakota alone, thousands of students enroll each year in the state’s five tribal colleges: Turtle Mountain Community College, Nueta Hidatsa Sahnish College (formerly Fort Berthold Community College), United Tribes Technical College, Sitting Bull College and Cankdeska Cikana Community College.

“It’s because of the dedication of tribal colleges and universities to each student – many of whom have to overcome overwhelming obstacles of poverty, trauma and abuse – and their commitment to helping students flourish that I introduced this bipartisan legislation honoring the work of these schools,” said Heitkamp. “It’s part of my mission in the Senate to help tribal colleges and universities pave a path toward a better future for Native kids, and last fall, the first bill I introduced as a U.S. senator became law, which will help address the complex struggles Native youth face. Building a better country for Native children so they can realize their full potential is not easy, but when we are united in support of tribal educators and in the fight to support the wellbeing of Native young people, we can change outcomes.”

“Tribal colleges provide important higher education opportunities for students in North Dakota and across the nation,” said Hoeven, Chairman of the Senate Indian Affairs Committee. “This resolution recognizes the good work of these institutions and their efforts to train and educate our Native American students to help them achieve their goals.”

“Tribal colleges and universities play a key role in our Native communities in New Mexico and throughout the nation,” said Udall, Vice Chairman of the Senate Indian Affairs Committee. “They keep our students connected with Native language and culture and provide an education that equips them with the skills critical to getting a good job after graduation. I was proud to sign the resolution designating this week as National Tribal Colleges and Universities Week to ensure we recognize the important work that Tribal colleges, universities and teachers do for our Native students.”

Last year, Heitkamp worked with a bipartisan group of 20 senators to dedicate the week of February 7, 2016 in recognition of the vital contributions of tribal colleges and universities across the country, which she also did in 2015, 2014, and 2013. Heitkamp has long supported the work of tribal colleges and universities in improving educational and career opportunities for Native Americans, and will continue to work to raise awareness about the value of such institutions across the country. Both resolutions were unanimously approved by Senate.

Heitkamp has long been committed to improving educational outcomes for Native children. The first bill she introduced in the U.S. Senate became law in December 2016. It will create a Commission on Native Children to help address complex challenges faced by Native youth – including the lack of educational opportunities, high rates of poverty, staggering unemployment, child abuse, domestic violence, crime, substance abuse, and dire economic opportunities – and provide recommendations on how to make sure Native children get the protections, as well as economic and educational tools they need to thrive. Just last month, the first two members – Russ McDonald and Anita Fineday – were appointed to serve on the Commission.