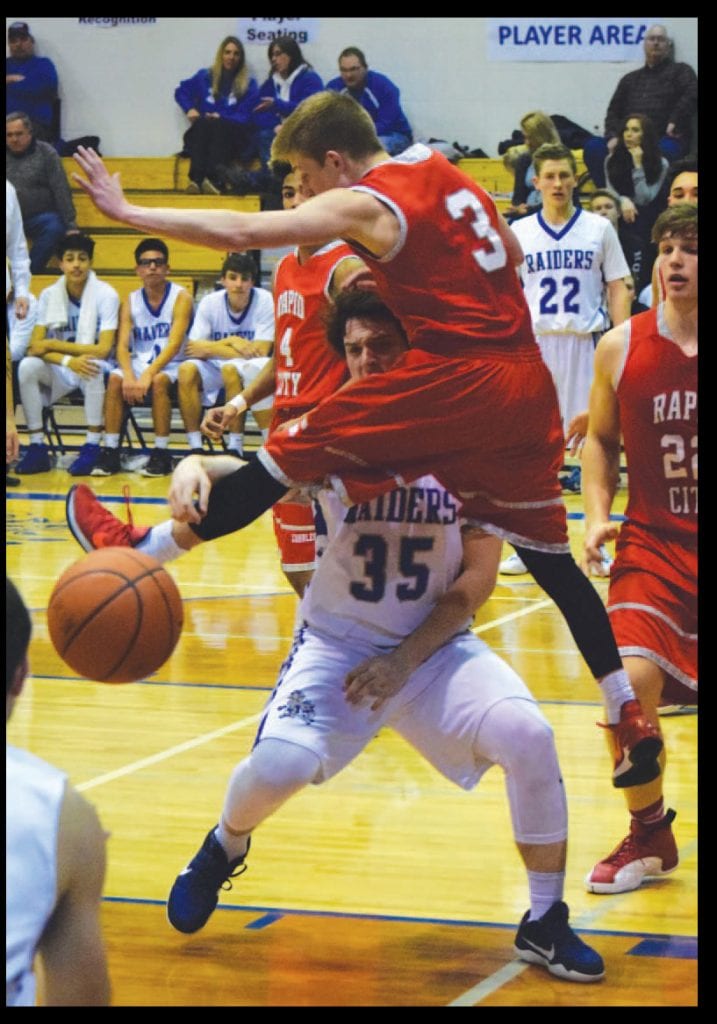 RAPID CITY –– Raider Head Coach Chris Stoebner is a pretty husky guy, but the first words out of his mouth after his team’s 54-41 defeat of arch-rival Rapid City Central were, “I’m exhausted!”

There are always a lot of emotions at play when Raider Blue squares off against Cobbler Red, and there is just no other rivalry in the five-state area that comes close to matching the intensity and historic drama when these two schools butt heads. 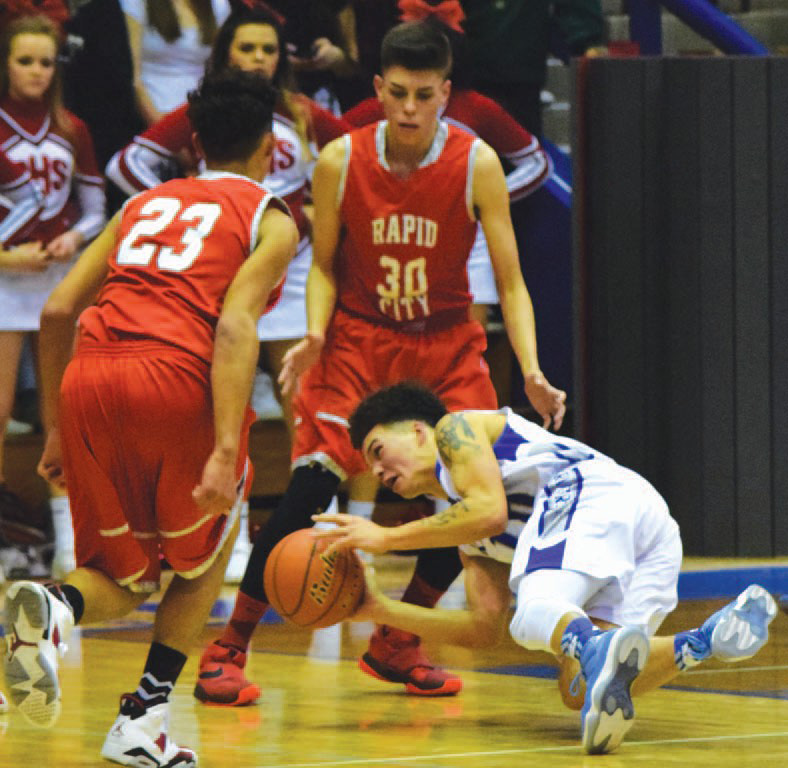 No doubt, Rapid City Stevens is having the better season, and they may have the manpower and coaching smarts to bring a state championship home to Carold Heier Gymnasium this March. But all of that goes out the window when these two teams share the same floor.

Cobbler Coach T.J. Hay knew what he wanted to do, and his charges came out and started taking it right to the home court Raiders.

Dylan Hay, generously listed at 5- 8, but with enough fire in his belly for a player 6-8, put the Cobblers on top with 3-point bucket. The Raiders brought the ball back up court, and center Jordan Lawrence backed buff Cobbler big man Ira Murphy deep into the point, before turning around and kissing a layup off the glass, to make it 3-2, Central. A couple of possessions later Jacob Martin bowled over Murphy in the paint and was called for a charge. Back from injury, the Cobbler’s athletic forward, Kailleb Walton-Blanden, took the ball to the hoop to put Central up 7-4. The fans didn’t realize it, but this would be the high point of the game for Central.

A hanging jumper from Martin drew a foul from Kyle Elder. Martin hit both free throws, and Stevens now only trailed by one, 7-6. Instead of backing Murphy into the paint, Lawrence decided to can a short jumper, and Stevens lead for the first time, 8-7. Murphy scored on a tough lay-up around Lawrence to get the Cobblers back ahead 9-8, with 3:20 remaining in the first quarter. Cooper Bowman then hit a nice jumper and Stevens went back up on top, 10-9. Nobody knew it then, but the Raiders would never surrender the lead again.

The first quarter ended with Stevens on top 15-11, but it took a last second three from Mason Archambault to give the Raiders that lead, which gave no indication Stevens had taken control of this game for good.

The second quarter would decide the game, more than that, it would make an emphatic statement, and it was a testament to how tough Stoebner has made this Raider defense, and how persistently they can impose their style of play on any opponent.

The Cobblers did not play badly on the defensive end. They held the Raiders to ten points, really seven, if Will Moore had not repeated what Archambault did at the end of the first quarter, by draining a last second three. That’s tough defense, but the problem was, the Raider defense was much better. How much better? The Cobblers scored exactly zero points in the second quarter. They went into the locker room down, 25- 11.

Whatever the respective coaches told their charges over halftime, both teams hit the floor determined to apply it. When the smoke settled on the third quarter, each team had scored 12 points, and if not for that awful second quarter, Central would have only been a bucket down.

Stevens opened the final quarter with an assist from Martin and a 3- pointer from Archambault. This team play would help make the difference, as they more than doubled Central’s team assist total.

Four times Martin’s assist found an underrated Gib Elder under the bucket, and Elder turned three of those assists into buckets, and was fouled on the final attempt by Kyle Elder, went to the line, and sank both free throws. Walton-Blanden would later soar in the air and score on a spectacular slam dunk with about a minute remaining, but that made the score 53-36, and Stevens cruised home and won, 54-41.

Responding to the fact his team shut out the Cobblers in the second quarter, Stoebner said, “That’s kind of what we hang our hats on. If we can defend, we’re pretty good. We protected the paint, for the most part, gave them only one shot.”

When asked about his paint hookups with Martin, Gib Elder said, “There’s a lot of chemistry there, a lot of chemistry.” But Elder thought it was the guard play that made the difference: “I think the ball pressure did a lot. Our guards did a really good job of getting after them.”

Martin echoed much of what Elder said: “We really worked hard as a team. It all started on the defensive end for us. When our shots aren’t falling, our coach tells us work on defense.”

Despite being a top tier offensive player, Martin explained the ball feeds to Elder: “That’s the way I been playing since I was a kid; I was always a pass first player.”

Hay and Walton-Blanden led the Cobblers with 12 points apiece. Murphy had 6 rebounds. Archambault had 16 points for the Raiders, Lawrence had 8. The Raiders outshot the Cobblers from the floor by just three more shots, but they shot 54% to Central’s 38%. Central held a slight rebound edge, 26-21, including a whopping 9 offensive rebounds, but that did not translate into buckets, the way the turnovers the Raiders forced did.

Stevens is now 10-3 and the Cobblers are 3-9. Both schools travel to Sioux Falls next week for two games against Washington and Lincoln.