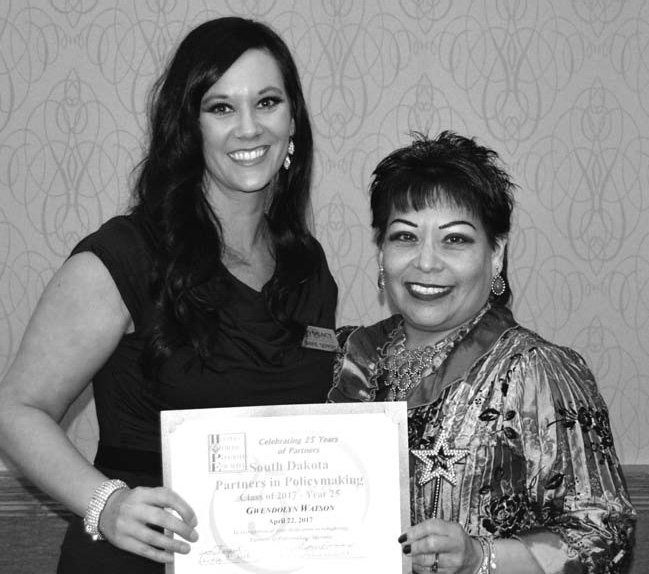 Twenty-two South Dakotans just spent the past six months training to be leaders. Gwendolyn Watson of Mission was a member of the graduating Class of 2017. The class motto was “HOPE- -Helping Others Promote Equality.” Partners training analyzes developmental disability issues and builds skills that consumers, parents, and guardians need to effectively obtain the most appropriate state-of-the-art services for themselves and others and participate in decision making situations.

Receiving special recognition was Lori Douville of Chamberlain who received the Robert J. Kean Advocacy Award given by the Board of Directors of SDAS. Douville, and husband, are the parents of two children with disabilities. Douville has been a very active advocate in the lives of her children and for others throughout South Dakota. She is a 1999 graduate of Partners in Policymaking. When presenting the award to Douville, SDAS Board President Juanita Harrington of Piedmont stated “Douville is a true advocate for ALL individuals. She is a volunteer, active in Special Olympics, and serves on many boards and councils.”

Senator Troy Heinert of Mission, District 26, was the recipient of the SDAS Legislative Advocacy Award. In accepting his award, “Heinert told the attendees he is a voice for all people, a voice for those that don’t have one.” Morris Brewer, SDAS Board Vice President presented the award to Heinert and noted “Troy is an enrolled member of the Rosebud Sioux Tribe, Assistant Senate Minority Leader, husband, and father. He is a rodeo cowboy, poet, guitar player/singer, business owner, former school teacher, and wrestling coach.” He went on to say Heinert is a strong voice in the SD Legislature.

Class speakers for graduation were Julie Reinert & Diana Treadway both of Spearfish; Cassandra Rogat, Yankton; Dedric Rose of Flandreau and Julie Niles, Pierre. Each speaker touched upon their experiences from Partners and how they will use the training. Stocklin Hook took on her ultra-ego persona as Swami Sandy and using her crystal ball looked into the future of how each member will go on to do bigger and better things. She gave each one “their magic wand to change the future.”

In addition to graduation ceremonies, 162 graduates of prior years of SD Partners in Policymaking spent the weekend in Sioux Falls attending continuing education classes on current issues. “Networking is a very integral part of the entire training initiative. We have made a commitment to gather all graduates with the current class and offer continuing education and networking. Once a Partner graduates from the course, they are not forgotten,” commented Stocklin Hook.

Year Twenty-Six of Partners in Policymaking will begin in November 2017. For more information on the program, contact Sandy Stocklin Hook, SD Advocacy Services, 221 S. Central Ave., Pierre, SD 57501 or call 1-800-658- 4782. Or you can visit the SDAS Website for Partner information at www.sdadvocacy.com or email hooks@sdadvocacy.com.