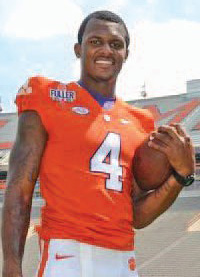 Welcome fans to the 2017 NFL draft where you see the future right in front of you. “Commander Timmy, do the honors of introducing some of the top draft picks. “Aye, Aye sir, a record crowd was on hand in Philadelphia Pa. as 250,000, an NFL record, attended the festivities.

No. 1 Surprising move by the Cleveland Browns passed up a top quarterback opportunity for DE Myles Garrett out Texas A&M. Garrett was selected for his ability to tackle for losses. No. 2 QB Mitchell Trubisky out of North Carolina was a reasonable draft at the quarterback position by the Chicago Bears. His mobility will keep defenses offset. 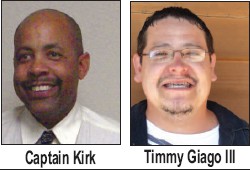 No. 3 DE Solomon Thomas from Stanford was selected to the San Francisco Forty Niners. The PAC-12 Defensive Player of the Year will keep pressure on opposing linemen. No. 4 RB Leonard Fornette the former standout from LSU will give the Jacksonville Jaguar the rushing threat they were seeking. No. 5 WR Corey Davis, an excellent pick for the Tennessee Titans. Davis is the All-Time leader in receiving yards from Western Michigan and will be a great addition for Titans QB Marcus Mariota.

No. 6 Safety Jamal Adams of LSU as selected by the New York Jets to assist with reducing passing yards against the Jets defense. “This addition will add depth to their secondary,” noted our guru Timmy. No. 7 WR Mike Williams at 6’4” out of Clemson will give the Los Angeles Chargers an offensive threat they were seeking. Match up issues for opposing defenses will draw attention to this prospect leaving key offensive positions available

No. 8 RB Christian McCaffrey from Stanford University a top sought out scout selection who runs with power and speed. He was just what the Carolina Panthers needed to replace their former power back Mike Tolbert. McCaffery is the son of WR Ed McCaffery who played a wide out for the Broncos.

No. 9 WR John Ross this pick out of Washington is more known for his kick returning skills. Many teams are selecting players this draft who can play multiple positions. Ross will add depth to the Bengals wide receiving corps when starters are injured. No. 10 QB Patrick Mahomes this Texas Tech gun slinger is just what the Kansas City Chiefs need to back up their starter QB Alex Smith who is known for his mid-range accuracy.

“That was very accurate analysis Commander, I will continue with this years’ selection,” stated the Captain. No. 11 CB Marshon Lattimore a top pick for the New Orleans Saints who is known for his “ball hawking” skills and is rarely penalized. Has true potential to be a shutdown corner back. No. 12 QB Deshaun Watson from Clemson was the most sought after player in the draft selected by the Houston Texans. With the departure of QB Brock Osweiler, the Texans knew they had to draft him. Now their playbooks can be designed around his arm and mobility. No. 13 LB Reddick Haason out of Temple University who has great acceleration to the ball once he locks on to a target and will be a great playmaker for the Arizona Cardinals.

No. 14 The Eagles traded up to select DE Derek Barnett from the University of Tennessee. A tough outside lineman who is durable and never missed a start is the stability the City of Brotherly Love needs at this skilled position. “Teams are becoming aware of the damage a great defensive end can cause to an opposing offense,” noted the Captain.

No. 15 another Ohio State standout Safety Malik Hooker was selected by the Indianapolis Colts. Hooker reads the eyes of the quarterback well and is known for his quick decision making. As the Colts looks to improve their secondary with hopes of finding the next Safety like former All-Pro Bob Sanders. No.16 CB Marlon Humphrey from the University of Alabama. Humphrey was selected because he contains good balance and is noted for his ability to break up passes. Washington will use his talents to solidify their defense. No. 18 Two times is a charm as the Tennessee Titans acquire two first round selections to include CB Andoree’ Jackson out of USC. Jackson is an all-around player who can play defense, offense and special team and is known as a triple threat. No. 19 TE O.J. Howard from the University of Alabama is just what the Tampa Bay Buccaneers needed with his 6’6” stature and ten-inch hands will aide QB Jameis Winston by drawing double coverage leaving other skilled positions open. No. 20 OT Garett Bowles was selected by the Denver Broncos. Selected to add depth to a woeful offensive line last season. Bowles overcame a troubled youth background to make the draft and will pay dividends to his new team.

No. 21 LB Jarred Davis from the Florida was selected by the Detroit Lions. Davis with his ability to tackle for losses in the backfield is a rare commodity that will help shut down a running game. No. 22 OLB Charles Harris from the University of Missouri was red-shirted and studied under a great line backing core like Shane Ray and Michael Sam.

Selected by the Miami Dolphins he is a tall stout Linebacker at 6’3.” No. 23 TE Evan Engram went to the New York Giants as he was selected from Ole Miss which is Eli Manning’s former college. With the departure of WR Victor Cruz, there is a window of opportunity for Engram to draw attention to defensive opponents.

No. 23 CB Gareon Conley was selected by the Oakland Raiders who were exposed in their passing defense. “It is hard to replace a Corner Back like All-Pro Charles Woodson. Building depth in the corner position was instrumental for the Raiders. Conley will provide stability in which he started every game for two years with the Buckeyes. No. 24 Safety Jabrill Peppers was netted by the Cleveland Browns who had two first round selections. Peppers was sought after by several teams in this years’ combine. The Browns are looking to improve their defense this season in defensive skilled positions. No. 26 DE Takkarist McKinley was selected by the Atlanta Falcons. A First Team All-PAC 12 stood among the few who are able to consistently gain access to opposing backfields. McKinley had 18 tackles for losses with UCLA which a key ingredient not only shutting down offenses but a crucial to winning games.

No. 27 CB Tre’Davious White was drafted by the Buffalo Bills to provide an upgrade in tackling with 55 last season. No. 28 DE Taco Charlton a perfect build for a Defensive End. At 6’6” and 277 pounds will be a strong contributor on passing downs. Was selected First Team out of Ohio to the Dallas Cowboys. No. 29 the third time is a charm for the Cleveland Browns who were criticized for passing up on QB DeShaun Watson. However, the Browns ended up with three first round draft pick by doing so, David Njoku from the University of Miami was selected for his athletic ability and long arms which will be a disaster for opposing defenses. No. 30 it was all in the family for OLB T.J. Watt who is the brother of Texans JJ Watt. Selected out of Wisconsin is a towering Linebacker at 6’4” and eleven inch hands which gives him ability to wrap up opponents and block the vision of the defensive backfield. “Does greatness run in the family?” chided the Captain. We will have to see how the Pittsburgh Steelers utilize his talents. No. 31 LB Reuben Foster from Alabama was drafted by the San Francisco Forty-Niners to add depth to a line backing core. Since the late season injury in 2015 to LB Navarro Bowman. The Niner Line backing core has lacked plugging up the middle of the line. Hopefully Foster will be the “go to” guy for Linebackers coming off the bench. No. 32 Wisconsin University gets another placement in the first round with OT Ryan Ramczyk. An opportunity came to the Saints to select the two- time All-conference pick.