‘The Black Hills are not for sale’ asserts Gonzalez and Means 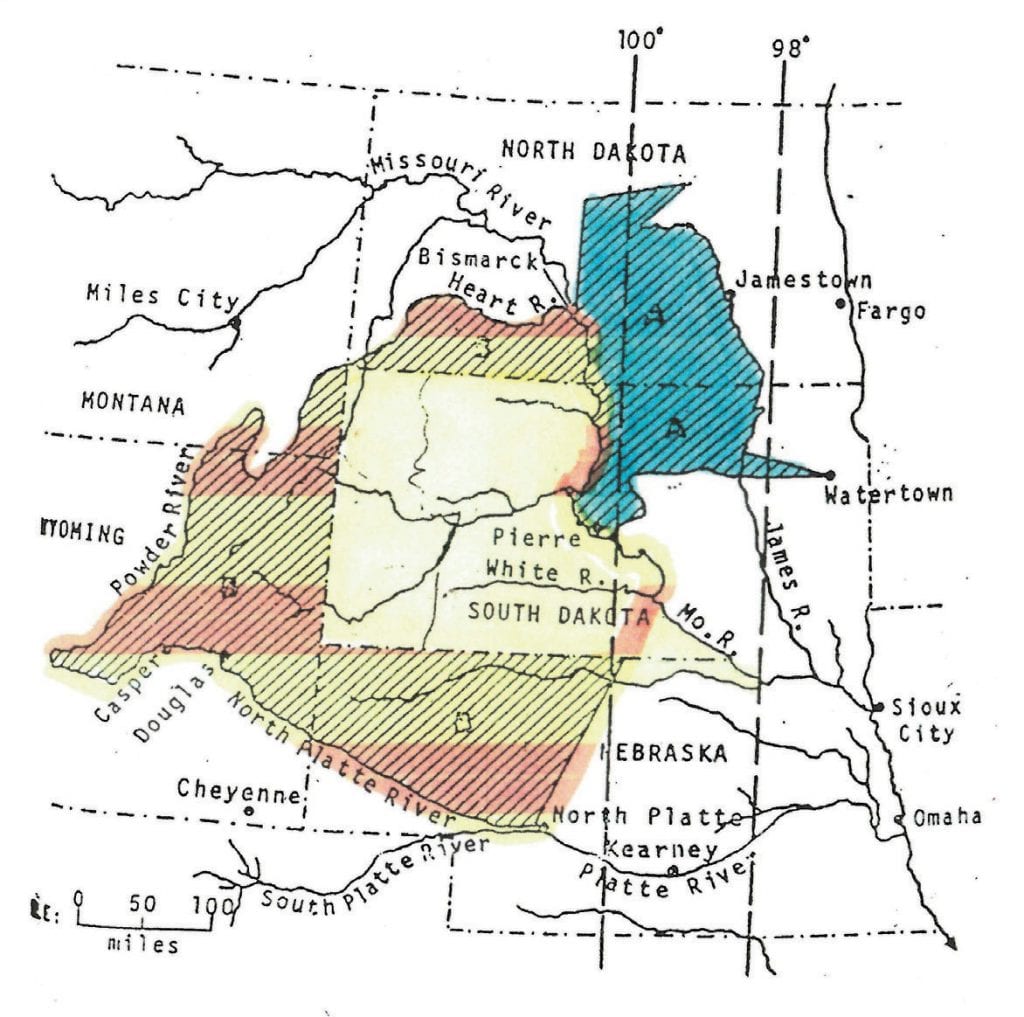 RAPID CITY — “How can you sell your homeland?” Bill Means asked the gathering in his closing remarks at the Great Plains Tribal Chairmen’s Association special meeting hosted by the Oglala Lakota Tribe. The meeting was held last Saturday and Sunday at Rapid City’s Ramkota Inn.

“How can you sell your place of creation?” Means said. “Everybody knows that in their heart and their mind. After you experience the spirit and power of the Black Hills you are not gonna sell it. Keep that in your minds, spread that in your Facebook, in your posts.”

Facebook was rife with rumors that the Oglala Lakota Tribe had passed a resolution to sell the Black Hills, which flabbergasted the Oglala Sioux Tribal leaders, because this was the first any of them had ever heard of it. Ironically, the special meeting was not called to address this issue, but the calling of the meeting created this issue, largely due to the Facebook efforts of James Riley Swan, who heads up an organization called United Urban Warrior Society (UUWS), whose community involvement ranges from caringly providing Thanksgiving turkeys to the poor and homeless of Rapid City, to spreading what appear to be blatant lies about tribal actions, individuals and objectives. 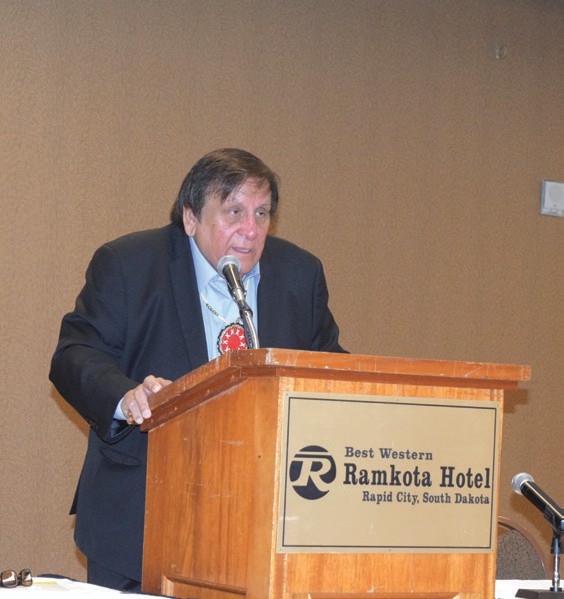 The Native Sun News attempted to find any source corroborating Swan’s Facebook accusations that the meeting at the Ramkota Inn was a scam fronting for the Black Hills Initiative, which Swan claims is a scam to steal the Black Hills, another accusation for which he provides no supporting evidence. 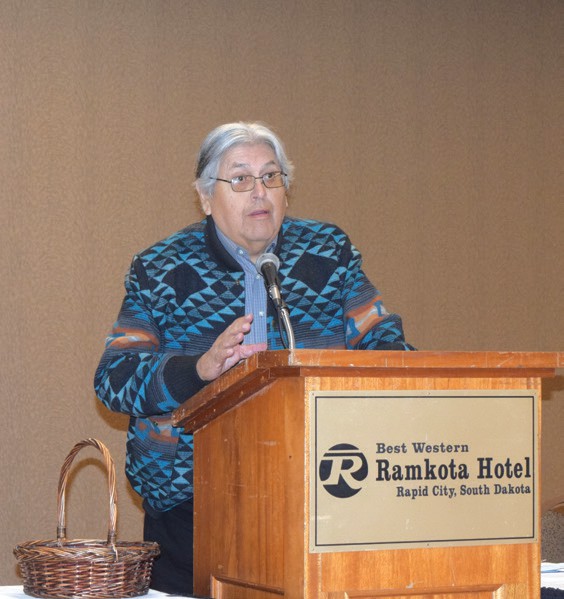 Swan posted a meme on Face- book which read: “MEETING at Ramada Inn, Rapid City, SD, to sell the Sacred Black Hills Sat. 10/7/17, 9am.” The meme was proceeded by this message: “This is the Black Hills Initiative scam! To make a deal on the sacred Black Hills and needs to be stopped! Everyone who stands to defend the Black Hills should rally against these fools!”

While he attended the meeting, Swan sat far in the back and did not contribute or object to any part of the proceedings. No spokespersons or protestors came forward to assert the Black Hills were being sold, save for one woman who quietly and respectfully laid down a Black Hills Are Not For Sale sign on the papers of Oglala Tribal attorney Mario Gonzalez.

Swan also accuses Gonzalez of trying to sell the Black Hills for personal profit and that Gonzalez has profited underhandedly in the past. He asserts he has documents proving such, but when asked by many people, including this reporter, he cannot produce these documents, and admits he has never seen these documents, but promises they will be forthcoming soon.

In more direct language, Means told the gathering: “It’s all a load of crap. Nobody is selling anything. I don’t know where these people get this, because they couldn’t have been here, or they would know we are not selling the Black Hills.”

“The problem is people are so misinformed on these land claims,” Gonzalez said. He points out that any attempt to sell the Black Hills would have to be agreed upon by all nine tribes involved in the settlement. “Just one tribe can’t get an agreement. Let alone nine. The point is the Sioux tribes don’t want this money.”

Means added that the purpose of the meeting was to update the people on not only land claims but “other issues, like the water, the Missouri River, the situation at Standing Rock. Major construction projects are taking place without paying or involving the tribes; they are creating a massive 70- inch pipeline from the Missouri River to give Fargo, North Dakota drinking water. Why don’t they use the water from the Red River? We had another presentation on the issue of travel. We have the right to travel within the boundaries of the 1851 Treaty. Our borders have never been diminished. There are still ways to promote our inherent sovereignty.”

Gonzalez said, “There’s nothing in the treaty rights (preventing) forming a National Government (of all Sioux Tribes, the Oceti Sakowin). You can start small. And when you do this you can do it the traditional way.”

By that, Gonzalez means these tribal bodies would be selected by traditional means, not Indian Reorganization Act means, which is the basis for most present day tribal governance. The idea then is to engage in negotiations or consultations with the federal government, not as wards of the state, but as a sovereign Oceti Sakowin Nation, an equal treaty partner with the most powerful nation in human history.

Gonzalez gave a detailed chronological history of the entire land claim battles of the Lakota, focusing on the details of the Black Hills issue, beginning with attorney Ralph Case, as far back as 1922. Everything Gonzalez asserted was easily verified by fact checking, and Gonzalez said the hope was this presentation might help alleviate fears and educate people about the actual history and consequences of tribal land claims and awards.

Means had some final remarks about the Black Hills controversy: “Some people don’t really care about the facts. They want to keep spreading these rumors, it’s a campaign to discredit that is going around to save the Black Hills.”

For the past half century Means and Gonzalez have been a major part of the effort to save the Black Hills. Gonzalez was the attorney that stopped payment of the Black Hills money back in 1981, which would have ended all claims to the Black Hills, and that initial award of just over 100 million has grown to 1.5 billion dollars given interest.

Means said to award that money now would mean “maybe a used car, or a bag of groceries and a case of beer, that’s all you’re gonna get.” But he fears what will happen when the money becomes three or four billion dollars: “As the money grows so does the suspicion. When people hear 1.5 billion they don’t give a damn about the tradition.”

Means said that the water protector fight up at Standing Rock “showed us we can join together as one tribe. They can’t pick us off one by one if we really come together on the issues we have in common, rather than those that divide us.”