The Ponca struggled to survive

Ponca Chief Standing Bear struggles to save his people 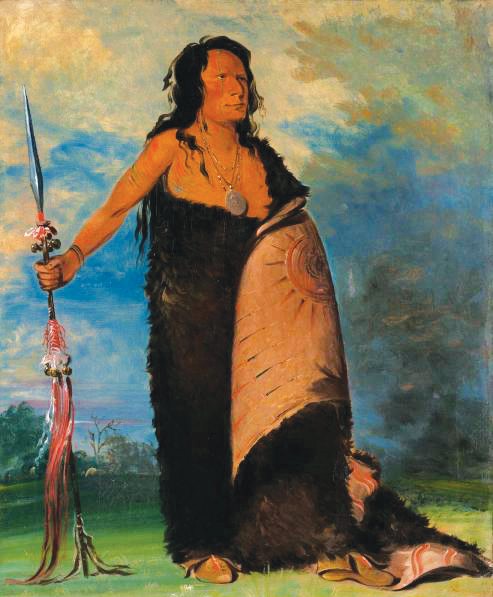 In 1881, Helen Hunt Jackson wrote a landmark book, “A Century of Dishonor,” which examined the dark history of seven tribes, meaning their relationship with the United States government. Each week the NSNT will examine one tribe from the book, updating Jackson’s observations to the respective tribe’s present-day circumstance.

In the early 1830’s the Ponca were visited by the famed artist George Catlin. He sat and talked with Shoo-de-ga-cha (Smoke), their principal chief, about the plight of the tribe, and the bleak future that the people faced.

Catlin was much impressed by Smoke, the “dignified manners” and the “soundness of his reasoning.”

Smoke provided a detailed analysis of the dire reality the Ponca struggled to survive against, he told Catlin the Ponca had “once been powerful and happy; that the buffaloes which the Great Spirit had given them for food, and which formerly spread all over their green prairies, had all been killed or driven out by the approach of white men, who wanted their skins; that their country was now entirely destitute of game, and even roots for food… and that his young men, penetrating the countries of their enemies for buffaloes, which they were obliged to do, were cut to pieces and destroyed in great numbers.”

Smoke then talked to Catlin about alcohol: “… his people had foolishly become fond of fire-water, and had given away everything in their country for it; that it had destroyed many warriors, and would soon destroy the rest.”

Like many tribes who entered into negotiations with the United States, the Ponca made the fatal mistake of relinquishing their equal status as treaty partners. This mistake persists to this day, as no tribal government understands that to actually be sovereign, you must never concede to be anything less than the equal of the United States in every matter of interaction.

In 1825 the Ponca agreed that they would reside “within the territorial limits of the United States, acknowledge their supremacy, and claim their protection.” But for thirty years little was recorded of that relationship, until an 1858 report from the Commissioner of Indian Affairs, about treaties entered into with the Yankton and Ponca tribes “for the purpose of extinguishing their title to all the lands occupied and claimed by them, except small portions on which to colonize and domesticate them. This proceeding was deemed necessary in order to obtain such control over these Indians as to prevent their interference with our settlements…”

It is clear the Ponca did not recognize the malignant intent of their treaty partners, as they trusted them to be honor bound to any agreement, and the Commissioner’s report goes on to indicate that is exactly how the Ponca acted: “…the Ponca proceeded in good faith to comply with (the yet-to-be ratified treaty) stipulations by abandoning their settlements and hunting grounds, and withdrawing to the small tract reserved for their future home. Being without a crop to rely on, and having been unsuccessful in their summer hunt, they were reduced to a state of desperation and destitution.”

The treaty was ratified a year later, and promised protection from the Sioux to the northwest, but the only time we hear of the Sioux is when they are attacking unprotected Ponca, and riding off with half their horses. The Ponca relationship with soldiers was actually much different than the government alleges in subsequent legal arguments (as rationale for finding against a Ponca suit), where they erroneously cite protection of the Ponca against enemies as being a determinative reality. Jackson writes: “A party of Ponca’s…had camped for the night about 12 miles from their own reservation… soldiers from a military post on the Niobrara River came to their camp, and began to insult the squaws…”

The Ponca attempted to move to the protection of a nearby “copse of willows,” but, “…the soldiers fired on them…and began to destroy all their effects. They cut the lodge covers to pieces, burnt the saddles and blankets, cut open sacks of beans, corn and dried pumpkin, and strewed their contents on the ground…”

The Ponca hid their ponies in a willow thicket, and when they returned for the ponies, the soldiers also returned: “The soldiers fired on them, wounding one woman by a ball through her thigh; another, with a child on her back, by two balls through the child’s thighs, one of them passed through the mother’s side…women and children who were looking for beans were half a mile below; a little dog belonging to them barked and revealed their hiding place in the willows…the soldiers deliberately shot them dead as they huddled helplessly together—three women and a little girl!”

Jackson then wrote, “The men who did this deed belonged to Company B of the Seventh Iowa Cavalry.”

An inquiry into the matter ended with this statement from the Indian Commissioner: “…the murderers of several of this loyal and friendly tribe had not been discovered or punished…as there seems to be no probability that this will be done, a special appropriation may be made for presents to the relatives of the deceased.”

The Ponca, it seems, had more to fear from the soldiers, allegedly there to protect them, than they did from the Sioux raiding them.

And, yet, in the 1966 ruling handed down from the Indian Claims Commission, protection of the Ponca from the Sioux is cited as one reparation for past wrong.

The 1966 docket then goes on to assert that they were “duly impressed” by the reasoning of Senator Samuel J. Kirkwood back in the 1880’s, and asserted he made “cogent observations.” Kirkwood did have great compassion for the plight of the Ponca, but from a 1966 perspective, any reasonable person should have found his reasoning patently at odds with the eventual tide of history.

His assertion the Ponca were badly treated to appease the powerful Lakota, and avoid war, is hogwash given how quickly that treaty was also violated and war did ensue. A 1966 Commission should be very suspect of reasoning and wording from a 19th Century Senate Select Committee, given that it was common to diametrically distort reality at that time, as in the massacre at Wounded Knee was a battle, and the battle at the Little Big Horn was deemed a massacre.

The most asinine aspect of Kirkwood’s opinion was the final sentence: “…a wrong has been done by us, we have done our best to right it by acknowledging the wrong and making reparation for it.”

Not only did the subsequent reparation amount to a pittance, what was done to the Ponca, by duly empowered agents acting on the government’s behalf, is one of the most heinous incidents in American history. It was not just a wrong, but a wrong that made everyday wrongs blush by comparison. In dealing with the powerless and unprotected, the federal government’s modus operandi is very simple, and utterly unscrupulous—“Because we have the power to imperiously impose our rationalized self-interest on you, we must. We exercise no self-restraint; we are never encumbered by conscience.”

Kirkwood’s words were myopically declared “unmistakably clear” by the 1966 Commission, but they ignored the true unmistakably clear words from Ponca Chief Standing Bear, that should have jarred their conscience and empowered the “better angels” of their nature: “They took our reapers, mowers, hay-rakes, spades, ploughs, bedsteads, stoves, cupboards, everything we had on our farms…many died on the road. Two of my children died. After we reached the new land (in Oklahoma Territory), all my horses died. The water was very bad. All our cattle died; not one was left. I stayed until one hundred and fifty-eight of my people died. Then I ran away with thirty of my people… we were three months on the road…weak, sick and starved…when we reached the Omaha Reserve the Omaha’s gave us a piece of land, and we were in a hurry to plough it and put in wheat. While we were working the soldiers came and arrested us.”

Thirty people, living peaceably on the reservation of their close cousins, where they spoke exactly the same language, and they could not be left alone with their wheat. There was no mercy, no humanity, just unrelenting, heartless persecution. And yet, when it was all done, and Standing Bear stood before a government court, he said: “We had no law to punish those who did wrong, we took our tomahawks and went to kill. If they had guns and could kill us first, it was the fate of war. But you have found a better way. You have gone into court for us, and I find that our wrongs can be righted here. Now I have no more use for the tomahawk. I want to lay it down forever.”

In the end, the true humanity, the dignity, the forgiveness came from an aboriginal savage never considered by the men of high principle who wrote the laws of the United States. How could any man forgive such a horror against his people, how could any country ever excuse or forget their perpetration?

Standing Bear could not know that almost a century later the Indian Claims Commission would rule against just reparation for all that had been perpetrated against the Ponca, that they would rationalize away culpability, and bury the dark history in the specious legal jargon common to self-serving bureaucracy.

There are 96,000 acres of Ponca land along the South Dakota border. It is a shameful part of Lakota history that we do not acknowledge the wrong we committed against our cousins, or the land they have lost that should be returned to them, down to the last willow stand, the last blade of grass, the last pebble, the last drop of clear, cold water.