The resettlement of the Cherokee

Treaty after broken treaty is only the beginning 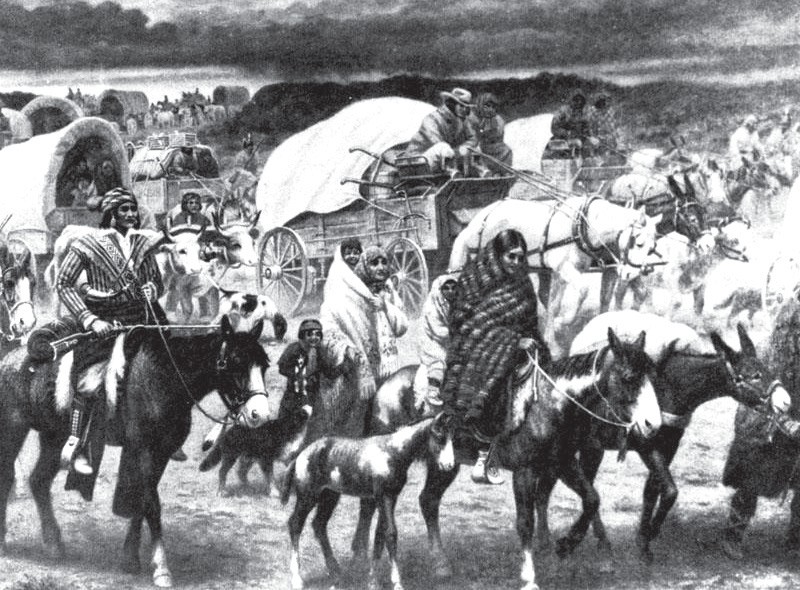 A historical rendition depicting the some of the Cherokee Nation on the Trail of Tears on their way to Indian Territory in modern-day Oklahoma.

At the time Helen Hunt Jackson wrote A Century of Dishonor in 1881, most people thought every Indian tribe would eventually be relocated to Oklahoma Indian Territory. Had this been put to popular vote, it would have prevailed overwhelmingly as policy.

White people of conscience have always been a minority voice, but have had a disproportionately positive influence on the fate of many tribes, however, their collective efforts on behalf of the Cherokee failed to an epic degree that screams of heart-wrenching irony. For no Indian nation ever came close to matching the historic Southeastern woodland Cherokee in their adoption of white customs and industry, in their conformity to white standards of conduct and religious practice. In 1830, when the Indian Relocation Act was passed by Congress, the Cherokee people had basically built a networked community of villages and schools and commerce little different than their white neighbors. 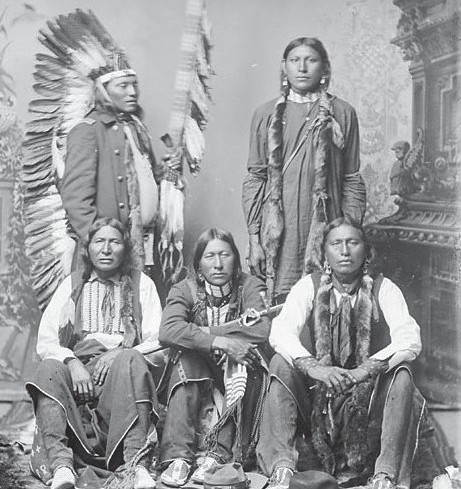 A group of Cherokee Indians pose in this historic photograph.

But these Cherokee lands were coveted as few tracts of land have ever been coveted by an envious people. Jackson describes the historic home of the Cherokee: “Their country lay along the Tennessee River, and in the highlands of Georgia, Carolina and Alabama— the loveliest region east of the Mississippi River. Beautiful and grand, with lofty mountains and rich valleys fragrant with flowers, and forests of magnolia and pine filled with singing birds and the melody of streams, rich in fruits and nuts and wild grains.” 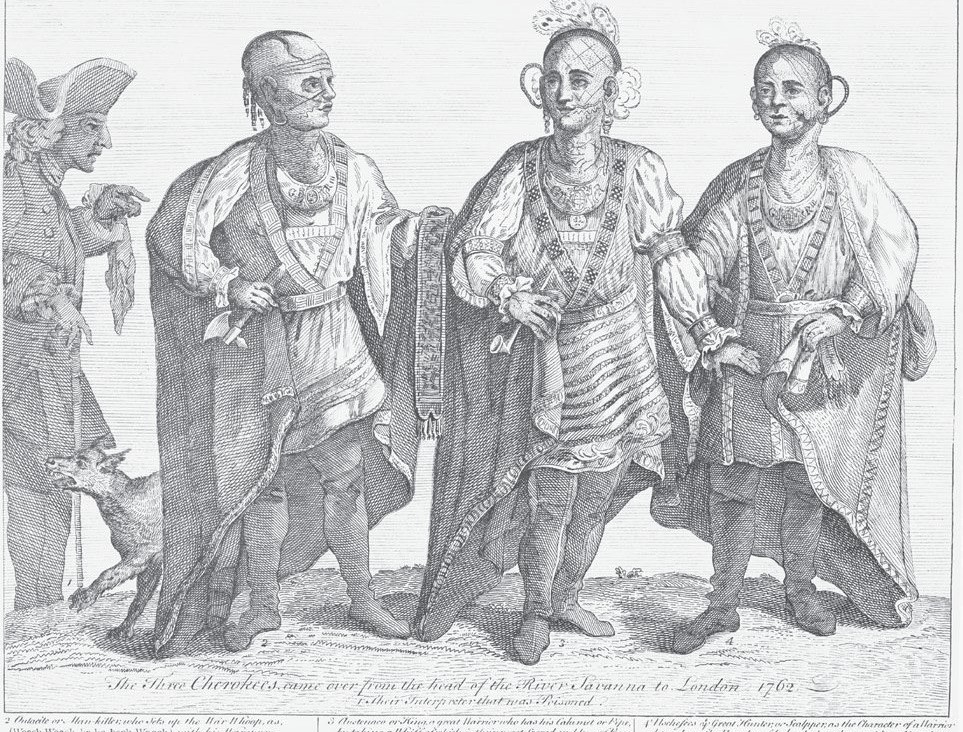 Lithograph of Cherokee men who visited London with Henry Timberlake – 1762

From the beginning whites came to this bountiful country as an ethically compromised lot seeking redemption, a fresh start. The entire focus of social activist Governor James Oglethorpe was to bring the downtrodden poor of his England to a place where they could thrive and prosper.

Oglethorpe was a man of honor, and the Cherokee had a fine relationship with him, but by mid-18th Century his experiment had failed, and his successors had neither the character nor vision to care about anything except getting on with the business of Manifest Destiny.

A succession of treaties were made with an educated, articulate Cherokee leadership, always broken when the relentless pressure of white encroachment forced political action.

Jackson wrongly concluded that the wantonly unethical political reality of this time would shame the next generation of Americans. She did not foresee a future America where people, aware of the removal and relocation of the Cherokee to Oklahoma, known as the Trail of Tears, would rationalize the injustice of it to the discarded depths of ancient history.

Georgia so wanted the Cherokee land they threatened to fight the United States for possession of it. Against this brazenly impolitic mentality, one that would consign millions of Blacks to slavery, and compel the South to engage in a bloody civil war with the industrial North, that would force Sherman to rent their state in two in his infamous march to the sea, what chance did the Cherokee people ever have of bucking the tide of an uncompromisingly ugly history?

It is hard to say how long the Cherokee people called this country home, but they held it for what might be millennia, against powerful confederations who wanted to call it their home. They were not covetous, they mothered this land, and they were content within its confines. Unlike their Iroquois cousins to the north, they had no desire to use it as a base to expand empire.

If a land can love a people back, this land must have loved the Cherokee, and the residue of that sacred bond, the ghosts of all who lived and died protecting their cherished home, must resonate still in the forests and pastures, must haunt the backroads and trails.

Eight generations of Cherokee have not called this land home. Some remained isolated in North Carolina, and some set out early on their own for the Promised Land west of the Mississippi. But most arrived via the Trail of Tears. They arrived to a hellish life, a sparse land which did not return love, a land surrounded by fierce warrior peoples, chief among them the Comanche. They considered this land their land, and the Cherokees were more than just interlopers to them, they were a ripe target for raiding parties.

Despite all that, the Cherokee endeavored to build in Oklahoma what they had built back home. They built towns, and roads, and schools, and developed commerce, erecting an impressive bulwark against Comanche incursion. Perhaps, had the dark tide of history not once again destroyed their world, they would have prospered to the point that by the time the Oklahoma Land Rush of 1889 came along, it wouldn’t have come along.

But the folks down in Georgia were not finished. They joined a confederacy to oppose Northern aggression, and by 1861 the Cherokee were threatened by the military of both sides, demands being made upon them to choose a side or suffer consequence. All choices were wrong. To choose the North meant immediate retaliation by the South, a South not known for their gentleness to people of color. To choose the South meant a postwar retribution which could cost them their land. To not choose either side meant to be ground to hamburger between both.

In the end their freshly rebuilt society was destroyed. In the postwar world they struggled to rebuild for a third time, and they did rebuild, only for the government to come along with a scheme to take what they did have and reduce it to as small a reality as Manifest Destiny could muster.

Two million acres of “unassigned land” was opened for settlement. The land was, of course, actually assigned. It was Indian Territory, and the government had promised to leave it alone. Remember the time when white people, only ten years before, wanted all Indians relocated to this territory, removed from the rest of a burgeoning country, which had dehumanized them in the collective conscience, dehumanized them to the point only such a vast, arid tract of isolated exile suited such insolent savages?

But now even that was too much. Had Indian Territory survived intact, and had most tribes been relocated there, the political clout of Indians today would be formidable. For the most part, all the peoples relocated there, would now be one consolidated tribe.

Today there are three Cherokee tribes. Located in North Carolina, the Eastern Band has over 13,000 enrolled members. Located in Oklahoma, are two bands. The Keewotah were the first Cherokees to occupy Indian Territory, preceding the Trail of Tears by as much as two decades. Their enrollment is over 14,000. The Cherokee Nation has over 300,000 enrolled members, making it the largest federally recognized tribe in the United States. Needless to say, they have a powerful influence in the politics and economy of Oklahoma.

It is hard to say what the industrious historical Cherokee would make of today’s situation. How much of themselves would they see in this hybrid tribe long removed to an alien land? Is there a scale large enough to weigh the loss of culture, of dignity, to weigh the suffering and tragedy and betrayals?

Maybe someday when they learn, Cherokee Nation will return. That’s what the pop song mused a half century back. But what the song fails to understand is that no matter how much the Cherokee conformed and conceded, no matter how hard they worked, and built, and prospered, all the more they were resented, and dehumanized, and their inconvenient existence removed from the rapacious imperative of white resettlement.