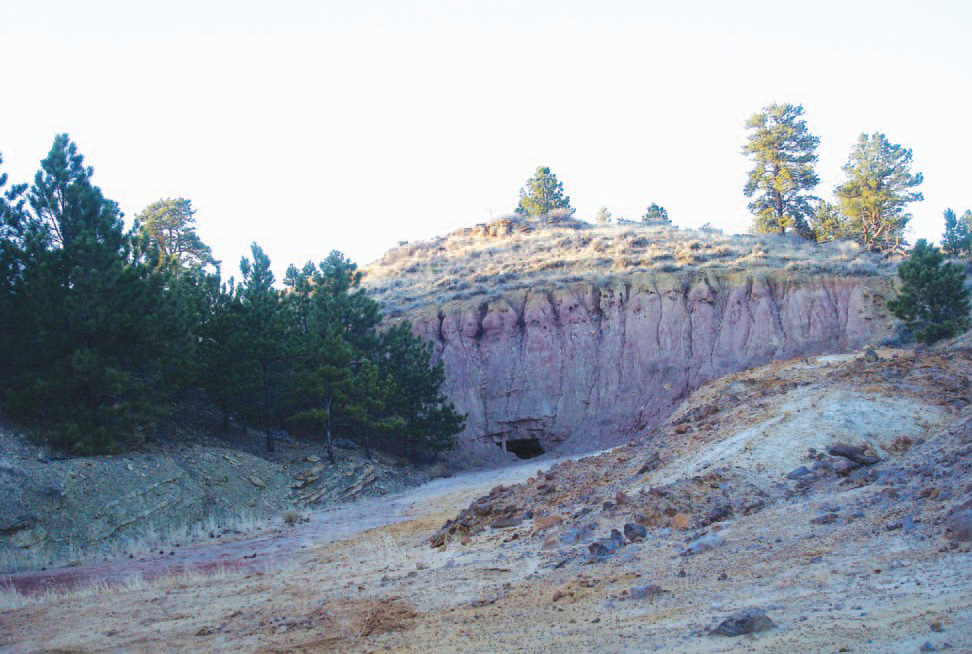 More than 200 sacred and archeological sites are known to share the Dewey Burdock project site north of Edgemont with 169 abandoned uranium mines and at least 7,500 exploration drill holes that remain on the property from previous operations dating back to the 1950s and 1970s.

DENVER, CO. –– The Environmental Protection Agency is coordinating with tribal government in an attempt to issue underground water permits for the uranium mining and milling project the Oglala Sioux Tribe opposes at the Dewey Burdock site 50 miles west of the Pine Ridge Indian Reservation in the southern Black Hills of South Dakota, the agency said March 6.

The announcement launched a public comment period on the EPA’s new draft permits for underground injection control of mine wastewater at the site and for the mining company’s request that the agency withdraw parts of the local water table from availability to the public for drinking.

If the federal paperwork is approved, the next step would be for South Dakota to cede water rights to the project proponent for an open-ended time-period to be used in what would be the state’s first solution mining, aka in situ leaching, or ISL, and on-site production of the concentrated uranium called yellow cake, which is the raw material for commercial nuclear fuel and military weapons.

In permitting the use of drinking-quality water at any uranium mine site, the EPA has to approve an exception to the Clean Drinking Water Act, thereby exempting the mining company from compliance. That’s because the water cannot be returned to its original quality after ISL and may not be good for human consumption.

“Under its obligation to comply with the National Historic Preservation Act and under EPA’s Tribal Policy on Consultation and Coordination with Indian Tribes, EPA has been consulting and coordinating with several interested tribes to identify the potential effects of the proposed project on traditional cultural places, historic and sacred sites,” the agency announced.

“EPA will continue to consult and coordinate with tribes as necessary throughout the public comment period concerning these proposed permitting actions,” it said. The period for written comments to be submitted is open until May 19. Oral testimony is expected at hearings scheduled leading up to that date.

The Oglala Sioux Tribe, headquartered at Pine Ridge, has taken the Nuclear Regulatory Commission to the mat in a federal administrative case contesting the proposition, which is now before the Atomic Safety and Licensing Board.

Testifying at hearings since 2010, the tribe argues that the NRC staff has failed to follow proper procedures in extending a federal radioactive materials handling permit to Azarga Uranium Corp. (formerly Powertech Uranium Corp.), the promoter of the project.

A three-judge panel of the Atomic Safety and Licensing Board (ASLB) agreed with the tribe and other interveners in issuing an April 2015 ruling that tribal attorney Jeffrey Parsons said “confirms major flaws in the company’s analysis” for the proposal to conduct radioactive solution mining and milling on the 10,000-acre site located upstream from the reservation at the headwaters of the Cheyenne River.

“Powertech, Azarga and the NRC staff have never conducted an adequate review of impacts to cultural resources, and also did not impose sufficient controls to protect aquifers from contamination through historic drill holes,” Parsons said in a written statement at the time of the ruling, which sent the staff back to the drawing board.

More than 200 sacred and archeological sites are known to share the project site north of Edgemont with 169 abandoned uranium mines and at least 7,500 of exploration drill holes that remain on the property from previous operations dating back to the 1950s and 1970s.

Azarga Uranium Corp.calls Dewey Burdock its flagship project for breaking into the U.S. uranium mining business. With offices in British Colombia, Canada and Colorado, the penny stock’s majority investors are located in China, Singapore and Australia.

Hot Springs, Rapid City, and Spearfish, as well as Gillette, Wyoming, rely on the Madison for municipal supplies. Dewey Burdock ISL’s total per-minute use would be more than Rapid City’s.

The EPA is asking for comment on several specific matters regarding the permits and exemption proposal.

The agency wants to receive remarks regarding its draft Class III underground injection permit, which would allow the company to operate 4,000 wells to mix and pump fluids to dissolve and extract minerals, chiefly radioactive uranium, vanadium and selenium, located in the rock of the Inyan Kara Group of aquifers.

The Inyan Kara Group, originally named the Dakota Aquifer, underlies much of South Dakota and is one of the most famous water tables in the United States.

In the Black Hills area, the Inyan Kara Group contains two prominent strata, the Chilson Member of the Lakota Formation and the overlying Fall River Formation.

The single underground drinking water source in the mining area is Well16, which currently is not being used for human consumption but for livestock watering, so the EPA plans to take recommendations to decide whether to grant the final permit with a stipulation to close the well before or after a final permit issuance.

It says, “Because of the lack of legal distinction between a stock watering well and a drinking water well, the EPA cannot make a definitive determination that Well 16 does not currently supply Inyan Kara groundwater for use as drinking water for human consumption unless well 16 is plugged and abandoned.”

Meanwhile, the EPA is looking for observations from the public on its draft Class V deep underground disposal well permit, allowing the mine and mill to pump its wastewater into the Minnelusa Aquifer for final disposition. Four injection wells would be permitted under a single application for this deep disposal approach. They would be drilled through the Madison and other drinking water aquifers to a depth of about 2,800 feet, where the cleaned wastewater would be injected.

If Azarga Uranium Corp. doesn’t obtain the Class V permit, it will seek a permit to irrigate the land surface with the wastewater.

The EPA wants input “on the identification of traditional cultural properties at the Dewey-Burdock Project Site Area of Potential Effects, as well as on the potential adverse effects of the proposed project, and on measures to avoid, minimize or mitigate,” it says.

The agency also is seeking comment on its draft environmental justice analysis. It says, “The EPA has identified that enhanced communication is warranted for all potentially affected tribal communities, based on historic interest in the site, and specifically the Oglala Sioux Tribe and Cheyenne River Sioux Tribe because they are located downstream of the Dewey-Burdock Project Area along the Cheyenne River.”

Both tribes have expressed concerns about the impacts of ISL activities on the water quality of the Cheyenne River specifically and on groundwater quality in general, it says.

“In addition, because the Dewey-Burdock Site is located in the southern Black Hills region, all tribes with which the EPA consulted have concerns about identification and protection of historic properties, including properties of traditional religious and cultural importance,” the agency says.

During EPA tribal consultation, representatives of all of the tribes expressed concerns about surface and groundwater impacts from the underground injection wells. Tribes noted that injection into the Minnelusa cannot be achieved without piercing the Madison Aquifer, “which is an important drinking water supply in western South Dakota,” the draft environmental justice report states.

The environmental justice screening process identified the City of Edgemont as a potentially overburdened community, prompting the EPA to hold a number of public informational meetings and open hearings following issuance of the draft water permits and to allow for a longer comment period than that required by regulation.

“The EPA also proposes to implement appropriate permit requirements intended to ensure protection of the underground sources of drinking water and to facilitate public access to information in the event of noncompliance with permit requirements,” it says.

(DENR) has determined not to rule on Azarga Uranium Corp.’s application for a large-scale mining permit before the EPA and NRC application processes are complete.

The state legislature eliminated the DENR’s responsibility for underground water regulation, in response to Powertech Uranium Corp. lobbying in 2011, leaving that in jurisdiction of the EPA, which has no offices in South Dakota.