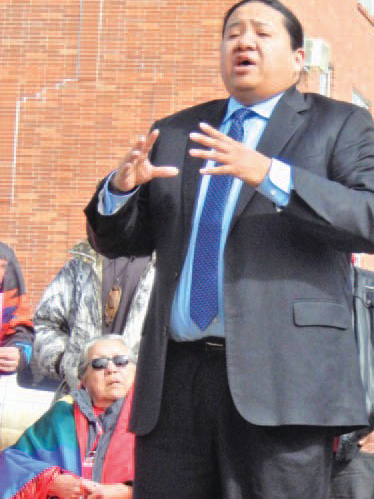 Killer referred to a seven-month standoff between North Dakota militarized police and Native American tribal constituents, who, along with allies from around the world, held high-profile actions in solidarity with the Standing Rock Sioux Tribe’s lawsuit to protect sacred sites and Missouri River water from that line throughout 2016. 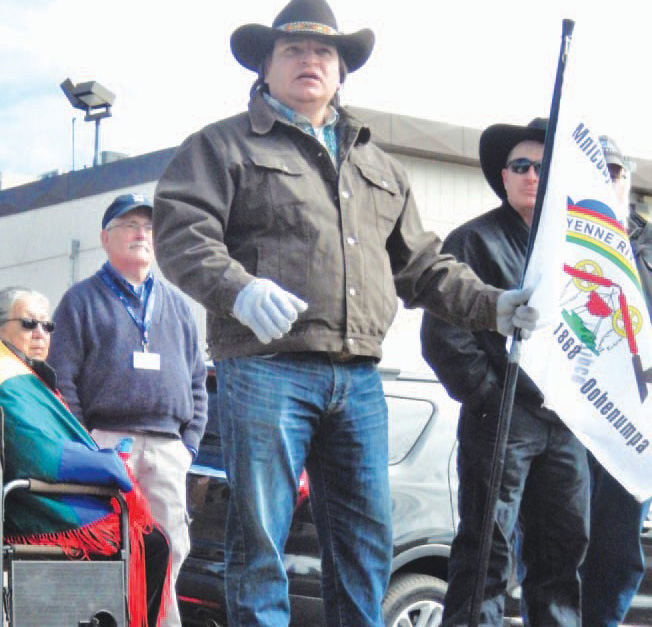 As nearly 100 people rallied around Killer and other speakers outside the courthouse, thousands more were heading for a demonstration on the Washington Mall against the Administration’s decision allowing Dakota Access Pipeline construction across the river one-half mile upstream from Standing Rock’s primary drinking water intake. 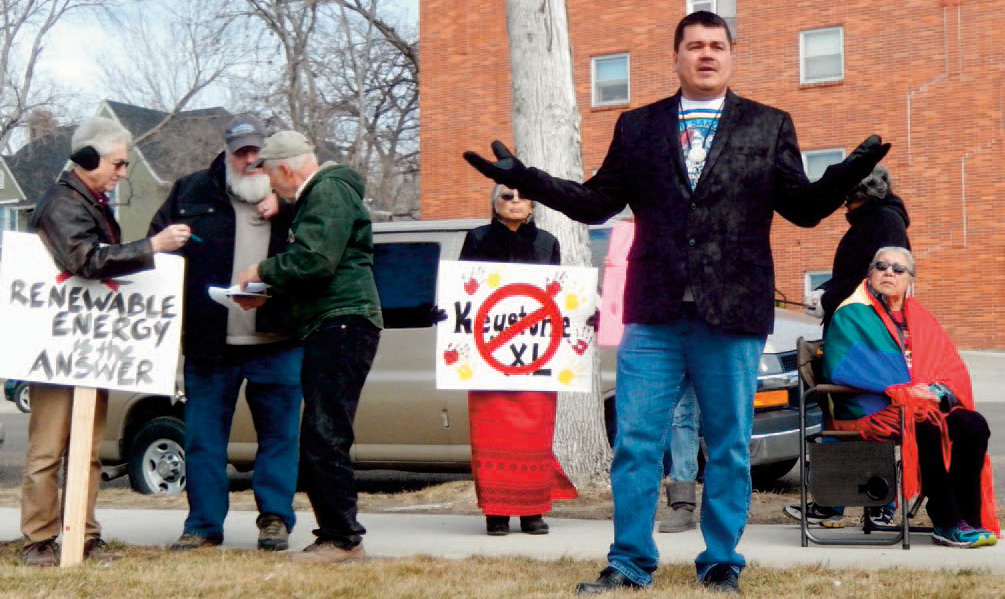 On the second full working day of his Administration, Trump fulfilled campaign promises by requesting the U.S. Army Corps of Engineers drop its environmental impact statement process for the Dakota Access Pipeline and by inviting TransCanada Corp. to resubmit its denied application for a Presidential Permit to build the Keystone XL across the U.S.-Canada border into Lakota Territory.

Grassroots spirit camps encouraging prayer gatherings to create a unified front against the pipelines through the Northern Great Plains during the previous Administration of Barack Obama culminated in the largest coalescence of tribes since the Battle of the Little Bighorn two centuries ago.

With hundreds of tribal governments and traditional leaders in agreement, the attention they drew to land and human rights issues catapulted the pipeline construction proposals into the international policy sphere, providing a background to Obama’s decisions against peremptory permitting.

However, TransCanada Corp. retaliated with an $15- billion lawsuit against the United States for loss of potential profits, under the rules of the North American Free Trade Agreement. The suit went on standby as soon as Trump gave the green-light to expedite federal permitting.

At the rally in Pierre, Crow Creek Tribal Chair Brandon Sazue warned that the revival of the Keystone XL and Dakota Access pipelines are part of a larger panorama. “Money’s buying everything today,” he said. “We’re losing the EPA. The Cabinet is being filled with billionaires.”

Sazue referred to campaign financing Trump and his Energy Secretary Rick Perry have received from investors in the Dakota Access Pipeline, as well as to Trump’s EPA Secretary Scott Pruitt, a longtime adversary of the agency, and to a Congressional bill to eliminate the EPA.

“Everyone in South Dakota needs to wake up,” Sazue said. “If there’s an oil spill in this river, we’re all going to be affected by it.” The river is in view of the courthouse where an authorized protest zone was established for the rally.

The Crow Creek Sioux Tribe is one of several tribes with reservations along the Missouri River downstream from the Dakota Access Pipeline crossing, including the Cheyenne River Sioux and the Yankton Sioux, both of which have joined the Standing Rock in court to stop it.

In addition, more than 17 million people downstream from its crossing of the Oahe Reservoir rely on the river water, including those in the Mni Wiconi Rural Water System that pipes Missouri River water westward to the Pine Ridge and the Rosebud Sioux reservations in South Dakota.

Meanwhile the Keystone XL Pipeline also would carry oil across the rural water system route, several waterways and the Ogallala Aquifer in Nebraska, a water table close to the surface that is crucial for agriculture in eight states.

TransCanada Corp. and the business associates behind the Dakota Access Pipeline state that they use state-of-the-art technology to build the pipelines, which they say are the safest way to transport the oil, a substance classified as a hazardous material.

While tribes argue treaty rights protect them from surrendering to the pipeline construction, non-Indians on the proposed route of the Keystone XL Pipeline in both South Dakota and Nebraska argue that their property should not be subject to condemnation for the line under the doctrine of eminent domain, because the project is a private profit venture rather than a public utility or service.

TransCanada Corp.’s Keystone I Pipeline, using the same technology as proposed for Keystone XL, ruptured at least 14 times in its first year of operations and experienced a major spill in South Dakota. Facilities operated by Dakota Access Pipeline investors recently have experienced explosions and fires.

Fearing chemicals from such incidents would quickly be absorbed into the sandy soils of Nebraska’s farm and ranch land, Art Tanderup, who faces property condemnation on the Keystone XL Pipeline route there, said, “We’re willing to stand up against it and say, ‘Leave those tar sands in the ground where they belong’.”

As an intervener in the South Dakota Public Utilities Commission’s hearings on the state permit, Tanderup attended the rally and court case appealing the commission’s decision to “certify” TransCanada’s 2010 permit, a ruling that allows the company to proceed with construction in South Dakota, if all other permits are in place.

Lawyers for the Yankton and Cheyenne River Sioux tribes, the Intertribal Council on Utility Policy, the South Dakota statewide family farm membership non-profit Dakota Rural Action, other groups and individuals argued the case with attorneys for TransCanada Corp. and the Public Utilities Commission.

Judge Brown was left to decide whether the certification proceeded as intended by law. Legal counsel agreed this was the first time the commission has been asked to certify an expired permit.

Much of the courtroom discussion addressed how deeply the commissioners should examine the details of the original permit and new circumstances after its four-year expiration date. The judge did not say when he will rule.

Cheyenne River Sioux Tribal Chair Harold Frazier’s spokesman Remi Bald Eagle urged more involvement in the effort to halt pipeline construction. “For too long, too little have been fighting for all of us,” he said at the rally. Frazier could not attend due to a tribal council session.

Bald Eagle agreed with Sazue that “your farms and your rivers” are what government representatives “should be thinking about” rather than “criminalizing” people who fight for them.

The tribal leaders criticized the South Dakota Legislature for SB 176 for making criminals of water protectors. Passed through both chambers on March 10, the governor’s bill to address anticipated future public actions against Keystone XL Pipeline declares an immediate emergency allowing him to “control the ingress and egress in a designated disaster or emergency area, the movement of vehicles upon highways within the area, the movement of persons within the area, and the occupancy of premises within the area.”

As soon as Gov. Dennis Daugaard has signed the bill, he and the local sheriff can ask the state commissioner of the Office of School and Public Lands to “Prohibit any group larger than 20 persons from congregating upon any tract of land” under the commissioner’s supervision “if the prohibition is necessary to preserve the undisturbed use of the land by the lessee or if the land may be damaged by the activity.”

The commissioner of the Office of School and Public Lands directs, manages and controls all state-owned lands, under the South Dakota Constitution. Currently holding the position is Nisland native Ryan Brunner, who formerly served as Brookings City Council member while in college at South Dakota State University.

The legislation does not say the commissioner is bound to respond in the affirmative to a request from the governor and sheriff, nor does it reference any chapter of South Dakota law pertaining to punitive measures for denying the request.

Once the bill is signed, creating the emergency, the powers granted to the governor under the emergency management section of state law “shall remain in effect for a period of six months and may be restored for one or more successive six-month periods by declaration of the governor that the conditions permitting such powers persist.”