Resisters set up camp in Louisiana 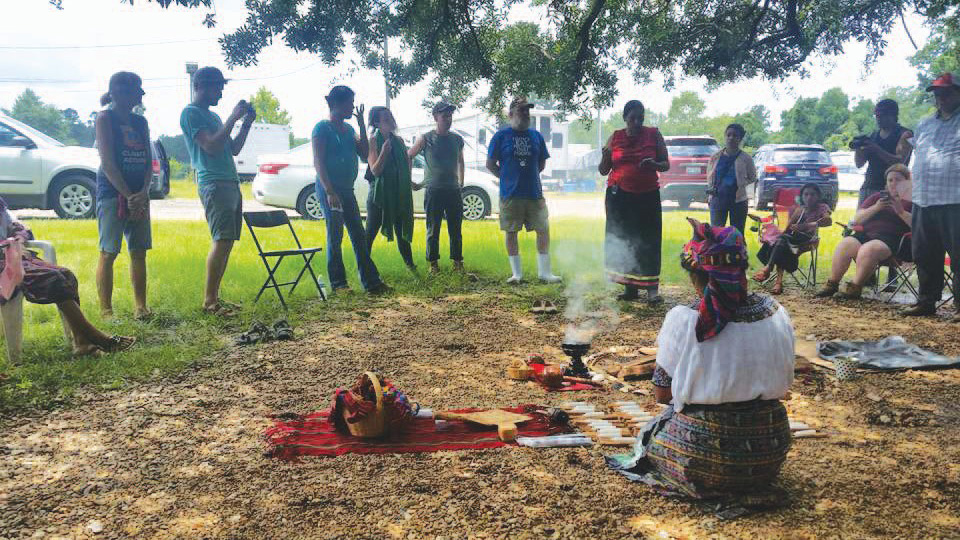 The new L’eau Est La Vie Camp (Water is Life Camp) in South Louisiana, opened on June 24, as “a hub for the resistance to the Bayou Bridge Pipeline.” Organizers called for supporters to “stand with water protectors in the Gulf Region as they rise to protect their wetlands, Indigenous rights, and the water that sustains their livelihood and culture” in the face of the Energy Transfer Partners project.

Appellants pondered taking the decision to the Supreme Court, while resistance to the project and others like it simmered from coast to coast.

The ruling is a precedent, because no challenge has been made in the past to the PUC process for renewal of expired permits. Appellants argue that because conditions had changed since the permit was approved, TransCanada Corp. should have to explain how it would adjust accordingly for permit reconsideration.

However, Brown decided the permit renewal was good because the project “continued to meet the conditions upon which the permit was granted 10 years earlier.”

The Rosebud, Yankton and Cheyenne River Sioux tribes, the Intertribal Council on Utility Policy, the statewide grassroots non-profit Dakota Rural Action, other groups and individual appellants, who rallied at the courthouse here during the final hearing in the case earlier this year, have not resolved whether to carry the case any further.

But one thing’s for sure, said Cheyenne River Sioux appellant Joye Braun, “We are not done fighting.”

Tribes argue treaty rights protect them from surrendering to the pipeline construction, while non-Indians on the proposed route in South Dakota and Nebraska argue that their property should not be subject to condemnation for the line under the doctrine of eminent domain, because the project is a private profit venture rather than a public utility or service.

TransCanada Corp.’s completed Keystone I Pipeline, using the same technology as proposed for Keystone XL, ruptured at least 14 times in its first year of operations and later caused a major toxic spill in South Dakota, the damage from which is yet to be fully remediated.

The company boasts state-of- the-art technology in the pipelines, which it claims are the safest way to transport the oil, a substance classified as a hazardous material.

U.S. President Donald Trump fulfilled his campaign promise to reverse the previous Administration’s rejection of a Presidential Permit for the project to span the Canadian- U.S. border in order to carry fossil fuel from Athabascan indigenous territory in landlocked Saskatchewan Province to Texas Gulf refineries and export shipping facilities.

With South Dakota’s permit in place, the only regulatory barrier to completion of the remaining part of the line from the Canada-Montana border through Nebraska, is that state’s permit.

The grassroots non-profit Bold Nebraska is mustering oil-pipeline resisters to “Give Keystone XL the boot,” with a march in Lincoln, Nebraska on the eve of a week of public hearings about the pipeline there, which begin Aug. 7.

“For nine years, pipeline fighters and water protectors have been fighting the Keystone XL Pipeline, which is abusing eminent domain for private gain, trampling sovereign rights, and threatening our land, water and climate,” the organizers said in an invitation to participate.

“Nebraska is our last stand, and the Public Service Commission will be voting on whether to accept or reject TransCanada’s permit application,” they said.

“Hundreds of Nebraskans from throughout the state will join us, including the nearly 100 brave landowners who for nine years have resisted TransCanada’s bullying and eminent domain, and refused to sell their land for the pipeline. Marching alongside us will be our native brothers and sisters who have also been fighting KXL since the beginning.”

Bold Nebraska, Sierra Club and 350.org are arranging for buses in several cities to travel to Lincoln for the event.

Noting that the hazardous materials would flow across the Mni Wiconi Rural Water System pipeline and threaten the drinking water source of several tribes and other communities, the Cheyenne River Sioux Tribe held a 2017 Water Summit in Eagle Butte over the weekend of June 23-24.

Opponents of the Dakota Access Pipeline through treaty territory in North and South Dakota arrived in South Louisiana the same weekend to help break ground on a new spirit camp challenging the proposed Bayou Bridge Pipeline, which would be an extension of the same project, engineered by Trump’s former corporation, Texas-based Energy Transfer Partners.

The new L’eau Est La Vie Camp (Water is Life Camp) near Ponchatoula, Louisiana, opened on June 24, as “a hub for the resistance to the Bayou Bridge Pipeline.” Organizers called for supporters to “stand with water protectors in the Gulf Region as they rise to protect their wetlands, Indigenous rights, and the water that sustains their livelihood and culture.”

The non-profits Bold Louisiana and Atchafalaya Basinkeeper, together with faith-based organizations have sued the state of Louisiana for permitting the project. The U.S. Army Corp of Engineers would also have to approve a permit for the construction to be completed.

On June 20, Sara Jumping Eagle and several other Individual tribal members from the Cheyenne River and Standing Rock nations joined those tribal governments’ lawsuit against the Army Corps of Engineers over the DAPL permit to build across the Missouri River upstream from their drinking water intakes.

In the lawsuit originally filed by the tribes, U.S. District Judge James E. Boasberg granted the individuals’ motion to intervene on the condition that they drop Trump as a defendant, the legal industry newsletter Law360 said.

The court has yet to decide tribal governments’ standing to pursue its claims under the Religious Freedom Restoration Act. If the judge determines they lack standing, “the Jumping Eagle interveners are uniquely necessary to assert and preserve” faith-based arguments, according to court documents.

Jumping Eagle et al are individuals who “own, live on or stand to inherit lands that will be impacted adversely by the Dakota Access Pipeline,” and may not be adequately represented by Standing Rock and Cheyenne River in the suit, in part because the tribes don’t necessarily share the group’s Lakota faith, Law360 explained.

In a Washington, D.C. status conference June 21, Boasberg set Aug. 28 as the deadline for filing all briefs on the prosecution’s demand to halt the flow of oil through DAPL while the Corps complies with his order to reconsider treaty hunting and fishing rights, spill risk, environmental justice, and the opinions of independent experts about the pipeline’s safety.

“The tribes advised that if the Corps does not permit proper tribal participation and input on these critical questions that affect our fundamental rights, we will ready to come back to court on new motions to fight for the process we are entitled to,” said Cheyenne River Sioux legal team member Nikki Ducheneaux. “The fight continues!”

A decision on staunching the flow is due in September, according to the Indigenous Environmental Network.

Outside Boasberg’s courtroom, the Indigenous Environmental Network, in coordination with the D.C.- based Rising Hearts Coalition, the Hip Hop Caucus, and Earth Justice held a rally in support of the tribes’ suit.

Jordan Marie Daniel, Rising Hearts’ founder and organizer, emceed the event and commented, “We stand resolute in our support for Standing Rock and Cheyenne River Sioux tribes in their fight to protect indigenous rights, and our planet.

“As the fight against placing corporate interests above the health, safety and well-being of entire communities and the quest to end the assault against the earth we share moves forward, we stand with these nations, and the millions who have supported them, in solidarity,” she said.

“The Standing Rock and Cheyenne River Sioux tribes’ battle for justice and responsible stewardship of lives and resources is on behalf of us all,” she said, adding that it “will continue to generate awareness and push for alternative, clean renewable just solutions.”

Dallas Goldtooth, lead national organizer for the Indigenous Environmental Network, said the fight against Energy Transfer Partners and the Dakota Access Pipeline “is not over, nor is it an easy fight ahead.

“We know that we face an uphill legal battle to victory, but we remain committed to the protection of the water and the power of our movement to keep fossil fuels in the ground. We support the Standing Rock and Cheyenne River Sioux Tribes in this fight and will continue to stand with them through the end.”

The State of North Dakota Private Investigation and Security Board is suing Energy Transfer Partners’ private security command for conducting unlicensed logistical coordination of state and private officers and counter-terrorism surveillance involved in more than 700 arrests of DAPL opponents in Lakota Territory from during militarized police actions from August 2016 through February 2017.

The Fargo, North Dakota-based High Plains Reader reported on June 22 that the board filed a civil suit against the security firm TigerSwan and its founder James Patrick Reese on June 12, 2017.

The DAPL security team drew an earlier investigation in 2016, after guards loosed dogs on anti-pipeline demonstrators. The investigation revealed that the guards failed to comply with the state requirement to have a dog-handling license. The board denied TigerSwan license applications twice.

“The civil action lawsuit against TigerSwan revealed the mercenary-for-hire company had a methodical and blatant disregard for North Dakota laws,” the High Plains Reader opined.

Reese founded TigerSwan to go after U.S. military contracts overseas. In Lakota Territory, its operatives paid special attention to individuals within the American Indian Movement, the Red Warrior Camp, tribal members from Standing Rock and Pine Ridge reservations, as well as dissidents of Polynesian and Palestinian descent, it said.