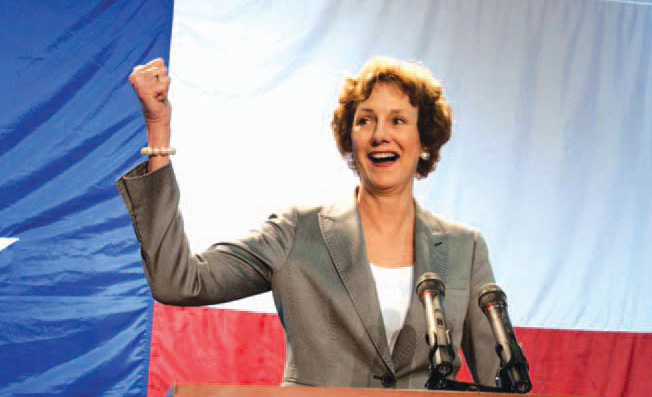 Susan Combs, nominee for Assistant Secretary of the Interior.

Combs, also a former state representative and Texas’s first female agriculture commissioner, regularly sparred with the U.S. Fish and Wildlife Service over species listings, petitioning in 2015 to have protections removed for an endangered songbird native to central Texas. She secured $10 million in state money for the comptroller’s office to fund scientific studies on species subject to federal listing — with a clear goal of protecting Texas’s economy, but which critics allege sought to undermine the federal government’s assessment and keep species off the list, according to a 2015 investigation by the Austin American Statesman.

President Donald Trump this month tapped Combs to serve as his assistant secretary of the Interior Department’s Office of Policy, Management and Budget. If confirmed by the Senate, she will join the likes of Environmental Protection Agency Administrator Scott Pruitt and Energy Secretary Rick Perry as top Trump officials with vehement opposition to agencies they’re tasked with helping to lead.

Combs will play a key role in the Interior Department decisions on finance, policy, management and environmental affairs. That includes the U.S. Fish and Wildlife Service, one of two federal agencies that administer the Endangered Species Act, among America’s bedrock conservation laws.

At a hearing before the Senate Committee on Energy and Natural Resources, Combs said she was “deeply honored” to be recommended. As a fourth-generation Texas rancher, she said she learned to “hunt, ride and shoot,” and “to be careful stewards of the land and to nurture it for the next generation.” She said she will bring the same “collaborative approach” to the Interior job that she did with endangered species issues.

As with many Trump nominees, Combs troubles conservationists.

Brett Hartl, government affairs director at the environmental nonprofit Center for Biological Diversity, told Huff- Post that Combs has “made it her personal crusade to fight endangered species.” To have her in a position where she could potentially harm endangered species via the withholding of funds, he said, would be “devastating.”

“She’s really bad news,” Hartl said. “There’s not a single thing in her record that suggests she cares a whit about endangered species.”

Trump’s 2018 budget request calls for slashing the Interior Department’s funding by $1.6 billion to $11.7 billion. That includes a cut of $220 million, or 14.5 percent, to the Fish and Wildlife Service. Interior Secretary Ryan Zinke — who had a poor track record on threatened species and a paltry 4 percent lifetime score from the League of Conservation Voters as a Montana congressman — has prioritized energy development and infrastructure over endangered species and habitat restoration.

Zinke praised Combs for her experience both as an elected official and in the private sector. “Susan is highly qualified and will be a huge asset as we work to make government more efficient and more accountable to the people,” he said in a statement.

Members of the Texas delegation in Congress, including Sen. John Cornyn (R) and Sen. Ted Cruz (R), called Combs “a fierce advocate for rural Texans” and “a committed public servant” who “understands that Interior can safeguard our resources while also encouraging beneficial economic growth.”

But Joan Marshall, executive director of Texas-based conservation nonprofit Travis Audubon, said Combs, if confirmed, will “have a much bigger arsenal to wage a much larger war” against America’s imperiled species.

“We’re at a critical moment in our history and need to decide what kind of world we want to live in: A world that includes birds and birdsongs, wild spaces and clean rivers, or a world paved over with parking lots,” Marshall said in a statement to Texas Monthly. “If we manage nature for shortsighted, short-term gains, nothing will be left for future

Last week, some 70 conservation groups sent a letter to the Senate Energy and Natural Resources Committee urging members to reject the nomination, describing Combs as someone who “built her career favoring big corporations and special interests over the needs and survival of imperiled species.”

“We are concerned that Ms. Combs will wrongly use her office at the Department of Interior to interfere with scientists from the U.S. Fish and Wildlife Service from doing their jobs of assessing the status of imperiled species based only on the best available science,” the letter reads. “Ms. Combs should not be placed in such a pivotal and important position in a department whose mission she clearly does not believe in.”

Combs’s public distaste for the Endangered Species Act dates to at least the 1990s, when she served in the Texas House of Representatives. Among the legislation she championed is a law that prohibits state wildlife officials from gathering endangered species data from private lands without permission, and restricts the state from sharing endangered species data, including with the U.S. Fish and Wildlife Service, according to the Austin Chronicle.

In 2011, during her tenure as the Texas comptroller of public accounts, the state’s endangered species program was transferred to her financial agency — thanks to an amendment to a bill pushed by Texas Oil and Gas Association, an industry trade group.

Combs described the pace of proposed federal listings for threatened and endangered species as “extraordinary,” and said, “Washington is running amuck.”

“The process that they use for so-called listing, I think to call if flawed is friendly,” she said at a 2011 event for a property rights association. “I think it’s non-existent.”

Her approach to Native Americans and Indian reservations and protected lands has yet to be determined.

(Article courtesy of the Huffingtonpost)