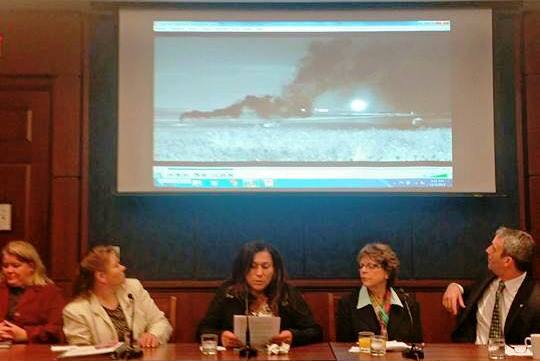 “It is time that we stop allowing these gases to be burned or vented into the atmosphere,” Dakota Resource Council board member Lisa DeVille (center) told the EPA in Washington, D.C.Photo courtesy DRC

WASHINGTON – Mandan Hidatsa and Arikara tribal member Lisa DeVille was among the first to testify on the dangers of uncontrolled fracking flares following the EPA’s recent extension until Dec. 4 of a deadline for public comment on new oil-and-gas industry pollution rules.

“We need monitoring, research, testing, and studies that show the environmental and human health impacts of exposure, said DeVille, a lifelong resident of Mandaree on the Ft. Berthold Indian Reservation, which is at the heart of the North Dakota’s Bakken oil field bustle.

“In North Dakota, the technology does not exist to reduce or eliminate the gas flaring,” Deville testified at the U.S. Capitol in Washington, D.C., Nov. 3-5.

“Our health and the health of our children and Mother Earth should not continue to be sacrificed,” DeVille told the EPA on behalf of the non-profit Dakota Resource Council, of which she is a board member.

She addressed the methane and other fumes in gas burned, or flared, at oil well heads, one of EPA’s top concerns in the rulemaking.

“For the past eight years, I have witnessed the rapid increase of oil and gas industrialization along with the environmental impact. Every direction you look there are gas flares that sound like a roaring jet plane that rumbles the ground like a train passing by. At night the sky is lit up like it is still day,” she testified.

“Our land once was lush with natural grasses, wildlife, June berries and plum trees.  Our way of life has been changed because of the interruption by the oil industry.  Everything has been tainted by the oil industry: the land, water and especially the air that we breathe,” she said.

“The flaring off of gas that can be used to heat thousands of homes, because it is treated like a byproduct, is harmful to the environment, human health, and the economy. It is time that we stop allowing these gases to be burned or vented into the atmosphere,” she commented.

Fort Berthold Indian Reservation has 1,500 oil wells and the potential for 1,500 more. As much as half of the natural gas produced in the oil fracking process on the reservation at any one time is flared. In 2013, 11,000 people lived within a mile of a flare in North Dakota, according to DeVille..

Much of the gas is methane, second-only to carbon dioxide in the size of its contribution to global warming. It has a climate change potential 25 times greater than carbon dioxide. It also contains volatile organic compounds such as benzene, a known carcinogen.

Nearly 30 percent of all U.S. methane emissions come from oil production and the production, transmission and distribution of natural gas, according to the EPA.

“We are concerned about the harmful health and environmental effects from the methane and other air pollutants that are released from well sites,” DeVille said.  “This is an unmeasurable cost to tribal members on Ft. Berthold and those down wind.  We value our health, our lands.

“Creating environmental laws and policies on oil and gas development that must be strictly enforced is very important,” she added.

“We as Native Americans are connected to the Earth because the story of our creation brings us from the Earth.  I was told this as a child and taught that the Earth is our Mother so we must protect it. It is our human right to have clean air to breath, clean water to drink and clean land to grow food,” she concluded.

EPA is proposing regulation updates that would set methane reduction and VOC (volatile organic compound) requirements for new and modified sources in the oil and gas industry, as well as a plan to implement minor New Source Review permitting in Indian country.

The methane strategy is part of the President’s Climate Action Plan. Final rules are expected in 2016.

The Domestic Energy Producers Alliance, one of the parties that registered to testify about the rulemaking,  is concerned about “unnecessary regulations imposed by the EPA and other federal agencies,” it says. “Just how much are federal regulations costing our economy?” it asks.

Instructions about how to comment in writing are available at www3.epa.gov/airquality/oilandgas/pdfs/comments.pdf