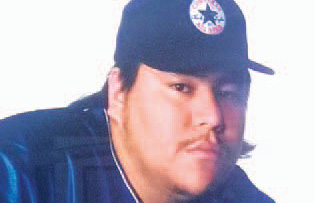 FORT THOMPSON – Tyler Cameron St. John, 34, made his journey to the Spirit World on Friday, July 7, 2017 at his home in Fort Thompson.

Tyler Cameron St. John was born August 14, 1982 in Chamberlain to Lance St. John and Ronda Hawk. From the moment he was born, he captured the heart and soul of his parents who adored him just the same. Tyler’s zest for life was evident early on in his life. His parents knew he required extra care and provided him the utmost support. Tyler attended school in Sioux Falls, Chamberlain, and graduating from Crow Creek High School.

Tyler had a generous and courage soul willing to help anyone that came to him. At times, his mother had to help guide him as his generous nature sometimes knew no boundaries, and she would reel that in. Tyler would listen to her lecture, often in silent agreement but internally knowing he was going to help if asked. You see that was him, never one to turn someone away because he was such a gentle man with a kindred spirit. If you needed help with your car, a ride somewhere, or a place to stay, Tyler was there for you. He had a love for music when he would tinker with working on his own cars and often he would sing along, nod his head, and on occasion, he might bust a move.

Tyler earned the nickname “Big T” and most would visually equate that to his size. But that nickname is really more about how he lived his life, BIG, and the size of his heart, BIG. So how fitting that his nickname really was about how he lived his life doing what he needed to in order to help others at such a young age. He was such a gentle man known in school as someone with a willingness to learn, great manners, and an ability to help others. His knack for humor was often hard to decipher because he always kept a straight face and often the receiver would get a chuckle but Ty kept a straight face through it all.

We will miss his laughter, his generous spirit, his willingness to always help that was his way of encouraging others, his soft-spoken voice, and seeing him cruising around. Cherish and hold onto the memories that his life held while he blessed this earth, and reflect upon those moments with love for a life taken too soon. Our spirits are broken and our hearts scarred losing our special son.

Preceding him in death were his grandfathers, Clifford Hawk, Melvin Rank, and Alvord St. John.