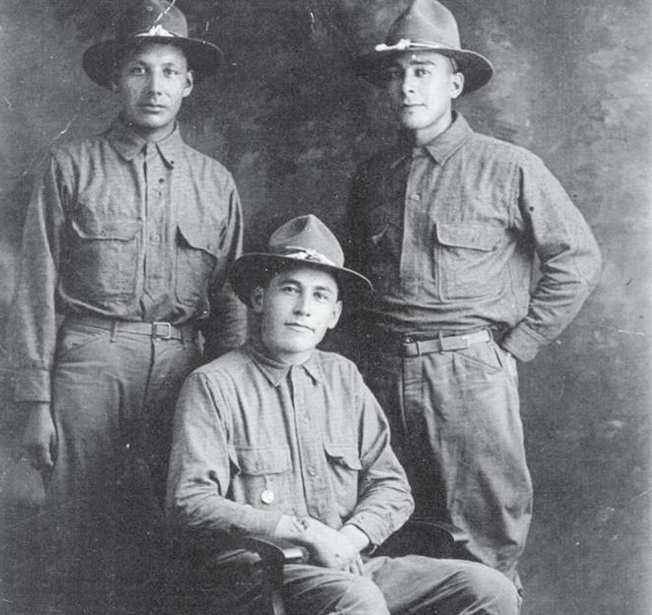 BISMARCK, N.D. –– United Tribes Technical College (UTTC) plans to recognize and honor Native men who served in the military in World War One during the college’s upcoming powwow. The 48th Annual UTTC International Powwow is set for Sept. 8-10 at Lone Star Arena on the college campus on University Drive in south Bismarck. The public is invited.

UTTC is the site of a former military post that was a busy assembly center 100 years ago as war raged in Europe. National Guard troops were trained and mobilized at Bismarck’s Fort Lincoln, exactly on the spot where the powwow takes place.

To mark the centennial of WWI, UTTC will honor Native American servicemen from North Dakota tribes who served and sacrificed, even before most Native people were granted U.S. citizenship. From left, Albert Little Owl, Dan Chase and Jack Nagel, all from Three Affiliated (MHA Nation), served in World War One.

The names of over 350 WWI-era Native servicemen will be announced in the powwow arena during an honor song. Families and descendants of the servicemen are invited to take part in the arena, along with veterans and others at the powwow.

A Veterans Dance Special will follow with prize money for women and men participants. For more information about the honoring, please contact Todd Goodsell 701- 255-3285 x 2751, tgoodsell@uttc.edu.

Known as “Home of the Champions,” the UTTC powwow is a well-recognized cultural showcase open to the public. As a contest powwow, over $100-thousand in prize money will be earned by the top singing groups and dancers in two dozen competitive categories. Prize money for the top drum is $10,000. Champions are announced and prizes awarded after three days of judging on Sunday, September 10. Day money is provided for noncontest drums and tiny tots.

Upwards of 1,000 participants from the Northern Plains, around the country – and across the border in Canada – make this one of the premier cultural events annually in North Dakota.

First Grand Entry is set for Friday, September 8 at 1 p.m. (Central Time). The point system is in effect. Grand entry guests include the 2017 inductees into the North Dakota Native American Hall of Honor.

Subsequent Grand Entries are Friday evening at 7 p.m., Saturday at 1 and 7 p.m. and Sunday at 1 p.m.

A $20 entrance fee guarantees admission for all three days. Daily admission is $10. Seniors (65 and over) and children (5 and under) enter free.

Admission wrist bands may be purchased in advance through Sept. 1 at the college’s finance dept. Group rates provided for 10 or more. Contact Ella Duran 701-255-3285 x 1214, eduran@uttc.edu.

Camping begins Tuesday, September 5. Space is available free of charge in designated locations on campus. Round-the-clock security is provided and access to facilities. No drugs or alcohol allowed and no pets.

United Tribes is a “tobacco free campus.” The college keeps tobacco sacred by allowing its use for ceremonies only. Other uses of tobacco in all forms are prohibited.