Book asserts that he was French/Dakota 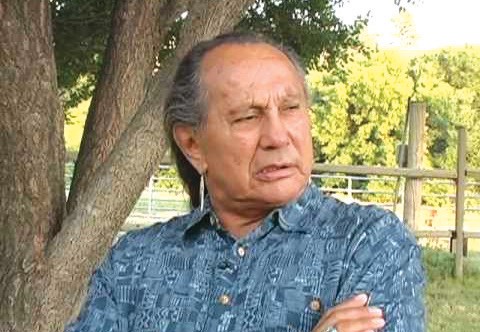 The book is full of blurred edges and nebulous connections, but on two things Hagan is very clear — Russell Means was mostly Wasicu, and he has not one drop of Oglala blood.

Large print and soft cover, the book looks hastily slapped together, as if notes jotted down over the course of decades were spliced together hurriedly, overlapping willy-nilly, much of it filler to flesh out what is really a short essay on the eye-opening ancestry of Means.

No doubt Hagan knew Means, they were intellectually intimate, and most likely every other kind of intimate, and she retains an affection, a fascination, for a complicated man, obligingly cast as a heroic, romantic warrior battling an evil Goliath for justice.

The public still buys that heroic image, but as the pages flow by, it is clear Hagan has snapped from that reverie, perhaps by one too many hard-hearted interactions with Means, perhaps by the death of a man that must have a been a larger-than-life focus for her passions for many decades.

So, she started digging, painstakingly scouring every available record, to not only find out who the people of Means actually were, and where they came from, but to find the counter evidence proving brazenly false, self-serving assertions by Means about his ancestry, assertions easily disproven by even perfunctory perusal of available records.

This book resonates in that regard because people do not generally bother to look deeper than the cover story, particularly when the person is Russell Means, an iconic figure people have all heard of, but few of the general public actually know. This mystery, this assumed understanding, is exacerbated by the unique way mainstream experts misread even the most mundane aspects of Lakota reality, or as Tim Giago once said to a Wasicu journalist who asked him to forgive his ignorance, “No, I won’t forgive your ignorance.”

There are places on this planet, where you or I would be lucky to last ten minutes before we were arrested and shot dead. Journalists go into these places, and they not only survive, they come out with stories no others could cover, interviews of despicable men with the blood of millions on their hands, and they return to these deadly places, and do the same thing all over again.

Sometimes these journalists focus on domestic injustice, and when they do, they go to an Indian reservation, like Pine Ridge, the home reservation of Means, and then they inexplicably believe the first crazy thing the craziest Lakota blurts out as truth, and report it as such.

For half a century Means benefited from that gullibility. He was able to cast himself as a genuine Lakota warrior, but as it turns out, Hagan has the research to indicate he was not what he claimed.

Means claimed his mother’s maiden name of Feather, was an abbreviation of Feather Necklace, a Lakota family he claimed as relatives, but it turns out they are wholly unrelated. He claimed that Means is the abbreviation of “Mean To His Horses,” but it turns out it is a European surname, and that his father was “essentially a white man who inherited land and Oglala citizenship through allotment policies of the United States.”

Hagan asserts that Means was really “a mixed blood French Indian from the Yankton reservation, in fact of French and Santee Sioux descent.”

She opens her book by harkening back to the unsolved murder of Leo Wilcox, a tribal council member, who during “the course of a radio program of March 1973,” and during the Wounded Knee AIM occupation, labeled Means a “Toka,” a non-Oglala outsider. Not far from Scenic, authorities found a burned-out car the next night, the charred remains of Wilcox inside. The murder has never been solved.

The reasoning Wilcox used to dismiss Means as a Toka, reasoning based upon the common knowledge of Lakota people about relatives and fellow tribal members, is what the ancestral investigation of Hagan bore out.

Means identified himself as an “Oglala Lakota patriot,” but this book casts deep doubt on whether he actually was Oglala, or even Lakota, without getting into the nature of his patriotism.

One quote she includes from Means, should give all of us great pause, for in it, we see the machinations of a mind intent on inventing a legitimacy, an image, part protector, part social engineer, part wise sage: “Golden eagles don’t mate with bald eagles, deer don’t mate with antelope, gray wolves don’t mate with red wolves. Just look at domesticated animals, at mongrel dogs, and mixed breed horses, and you’ll know the Great Mystery didn’t intend them to be that way. We weakened the species and introduced disease by mixing what should be kept separate. Among humans, intermarriage weakens the respect people have for themselves and for their traditions. It undermines the clarity of spirit and mind.”

Bald and Golden eagles can mate. Red and gray wolves can interbreed, and in the far north, polar bears and brown bears are now creating a hybrid species because of the vanishing ice sheets polar bears migrating south can no longer sustain themselves on. And in a wretchedly pathetic irony, Means unconscionably condemns the very mixing that produced the person he actually was.

If his disturbing quote is to be believed, that very kind of mixing, of “what should be kept separate,” did, indeed, undermine the clarity of his spirit and mind.

Hagan does not condemn what Means actually was, she does not deny he was Indian, but she does expose an arrogant, narcissistic personality, with enough contempt for the intelligence of others, he could not recognize the limits of his own. Despite the damaging impact of her research and writing, she holds fast to her affection and admiration for Means, she delves into the deeply contradictory elements of his qualities and shortcomings, and leaves us with an understanding, that whatever the ultimate truth about Means, he was a compelling and important person, history will not soon forget.