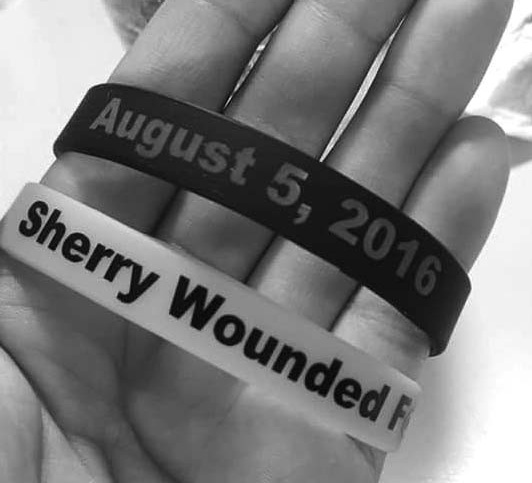 These wrist bands will be distributed at a candlelight vigil to be held in Whiteclay on Aug. 17 – the one year anniversary of Sherry Wounded Foot’s death.

LINCOLN, Neb. –– The closing down of Whiteclay liquor stores was accomplished in part by decades of persistency and by the unfortunate deaths on the border town streets.

Another of the special guest speakers will be Sandra Graham, 32, whose mother Sherry Wounded Foot died as a result of the injuries she sustained during a deadly beating which allegedly took place in Whiteclay last summer.

Sherry Wounded Foot is among the recent deaths that have occurred in Whiteclay. She was found badly beaten on Aug. 2, 2016 and died at the Pine Ridge IHS hospital twelve days later.

As a result of her injuries, Wounded Foot was placed on life support and transported to Rapid City Regional Hospital. On Aug. 10, the decision was made to take this mother of four off life support. She survived for seven more days. She was transported back to the hospital in Pine Ridge on Aug. 17 and died a couple hours later, according to Graham.

Native Sun News Today interviewed Sandra Graham prior to the event in Lincoln about her presentation and thoughts regarding the closing of Whiteclay and those who fought the State of Nebraska for the last two decades to have the border town liquor stores closed down.

“It means that I get to humanize my mother and tell her story and who she was as a person. I get to share with all her supporters about her life… What I want them (supporters of the Justice for Sherry Wounded Foot) to grasp is that I’m on a mission for getting justice for my mother for her death,” she told NSNT in an interview from Lincoln.

Frank LaMere played a major role in closing Whiteclay and it has been honored to meet him and get to know the movement from an insider’s perspective. “Getting to know him (LaMere) in person has been good. He has been in the fight for twenty years. I’m really glad he kept on it and hung with the battle,” the mourning daughter told NSNT. “I applaud Frank LaMere.”

“Meeting Frank and Peter was no accident. My mom’s death ultimately helped in their battle. Getting to know Frank has been inspiring. Getting to know the battle from their side has been a good experience,” she said of the activist and documentary co-star.

Native Sun News Today will feature an in-depth story about Sherry Wounded Foot and others who have died as a result of the liquor sales and alcoholism which has occurred in and around Wounded Knee over the decades.