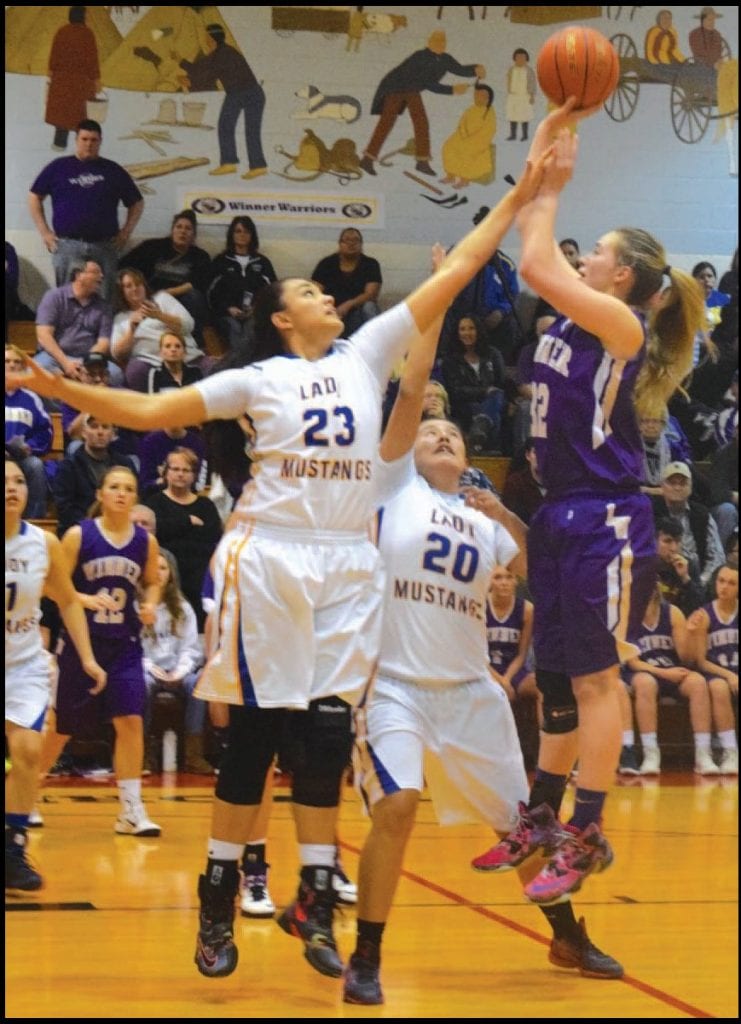 PINE RIDGE –– Once you get a double digit lead on the Winner Lady Warriors, your team is in deep trouble, and that certainly proved to be the case last Tuesday in Pine Ridge, as Winner upset top seeded Little Wound, 58-52 in overtime, to capture the Region 7A title and earn a trip to state.

Winner began their improbable come-from-behind tournament sweep a week before at home against St. Francis, and after trailing by 20, rallied to win by four, 63-59. This earned them a shot against Pine Ridge, who had crushed Bennett County 103-38. Winner had already lost to Pine Ridge this season, 71-60, and despite trailing 24-15 at halftime, the Lady Warriors again rallied to win, 50-47, courtesy of outscoring the Lady Thorpes 19-6 in the third period. 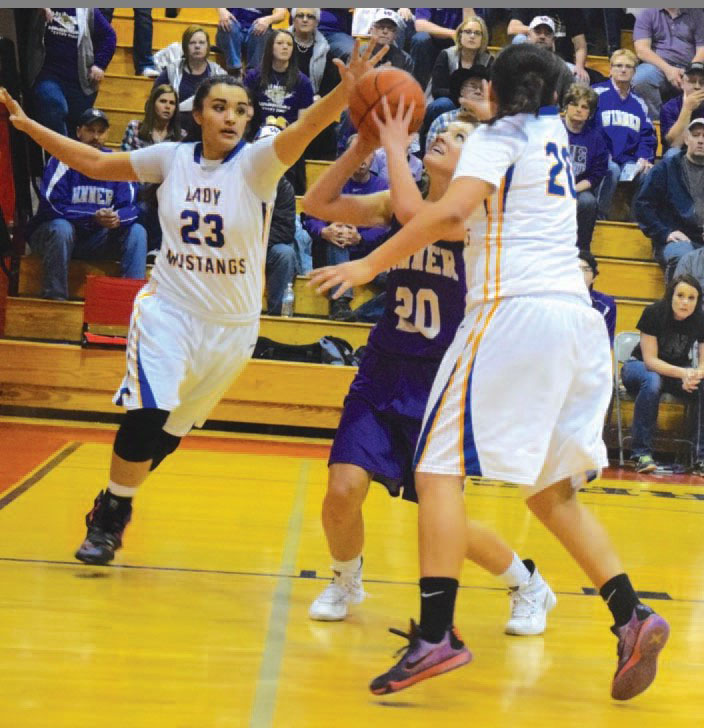 Undefeated against Region 7A opponents, Red Cloud opened the tournament with an impressive 67-60 win over Todd County. Having defeated Little Wound up in Kyle, 69-63 earlier this season, the Lady Crusaders had to like their chances in the rematch. But Little Wound showed why they won the LNI earlier this season, and why they were top seed in Region 7A, by handily defeating the inconsistent Lady Crusaders, 59-45.

This set up the showdown with what appeared to be a fish lucky Winner team, except the Lady Warriors would put their signature stamp on words like grit and resilience. Their raucous fans packed the gym, filling one side of the bleachers, and spilling over and taking half of Little Wound’s side of the court. They were loud, they were relentless in their exuberance and enthusiasm, and it would play a critical factor in the game.

The first period ended 12-all, and neither team appeared capable of establishing a rhythm. Little Wound opened the second period with an air ball from Cammi Bear Killer, and a mocking “Air ball!” chant from the Winner faithful. Tacie Lebeaux, Little Wound’s take charge, spring-loaded, 5-5 shooting guard quieted the crowd, when she got mugged in the paint and went to the line making one of two, 13-12, Little Wound. Janay Jumping Eagle, a 5-3 point guard for the Lady Mustangs, then came through with a spinning lay up to make it 15-12.

Lacy Bull Bear, a 5-7 senior, blocked the shot of Winner’s Kylie Horstman, and then down on the other end, Bull Bear banked in a three to make it 18-12. Jumping Eagle took the next turnover and raced along the baseline for a lay-up to make it 20-12. After Allison Cox gave Winner two free throws, LeBeaux had a brilliant block of Cox’s next shot, and after Bear Killer missed an in-and-out three, freshman Paula Yellow Boy cleared the glass with a put-back, 22-14. Reeling from the Little Wound attack, Winner could not buy a bucket, and LeBeau scored on one of her hopping midrange jumpers, and Bear Killer stole the ball, took it length of court for a lay-up, and just like that the Lady warriors were down by a dozen, 26-14.

After Sydney Fritz, a 5-9 senior, made a free throw, the half ended 26-15. The Lady Mustangs had outscored their opponent 14-3 in the second period.

Unfortunately for Little Wound, the Lady Warriors regrouped in the halftime locker room, and came out and outscored the favorites 18-9 in the third period. The Winner cheering section was on their feet for most of the quarter, toes right up to the edge of the court, and their boisterous presence was having a visible effect on the Lady Mustangs.

With just under two minutes remaining in the third, Horstman made a bucket to finally tie the game 33-all. Morgan Mesteth, who was having a great game for Little Wound, fired an assist to Yellow Boy to make it 35-33 at the end of three.

Winner stepped up the defensive intensity in the final period, and Little Wound lost their confidence, several players unwilling to take wide open shots. Winner soon built up a 45-41 lead, before Chloe Bartels, a 5-8 sophomore, fouled Jumping Eagle, who made both free throws to make it 45-43.

With 6-1 seconds remaining LeBeau was forced to foul Cox who made one free throw and Winner led by three, 46-43. Little Wound coach Lyle LeBeau called a time out. Needing three to tie, the pass went to Bull Bear in the corner, but it was tipped and Bull Bear barely snatched it back from the defense, spun around and fired perhaps the best shot of the entire basketball season, the game clock expiring in mid flight, and her shot banked home, forcing regulation play to end on a 46-46 tie.

A four minute overtime ensued, and it seemed Little Wound had dodged a bullet, and that Winner’s improbable playoff run was probably over. However, the Lady Warriors had been outplaying their opponent the entire second half and this continued in the overtime. At first, the Little Wound crowd actually got loud, fired up over Bull Bear’s heroic effort. This was shortlived, as Bailey Volmer, a 5-6 senior, scored back-to-back buckets to make it 50-46, Winner.

Jumping Eagle scored on a determined drive with just over two minutes remaining in overtime, to make it 50-48, but Volmer answered right back with another bucket and was fouled by Jumping Eagle. Volmer made the free throw and it was 53-48.

Mesteth then took charge and scored to make it 53-50 with 1:32 remaining. She then fouled Volmer, who went to the line and made both free throws. Jumping Eagle responded with a bucket, making it 55-52, but with 24 seconds remaining in overtime, Jumping Eagle was forced to foul 5-6 sophomore, Madyson Frazier, and Frazier sank both free throws to achieve the final score of 58-52.

Winner Head Coach Larry Aaker made no bones about the fan influence on the outcome: “It turned everything around…it gets into the other team’s head. They (the fans) were unbelievable, especially the fourth quarter and overtime. They just helped our defense immensely.”

Senior Duncan English, the leader of the cheering section, said it was all “pretty exciting. I honestly thought for a while we were down and out.”

“I want to credit Little Wound,” Aaker said. “They did a heckuva job. They were killing us on the boards but we did a much better job of rebounding in the second half.”

What did Aaker say to his girls at halftime to have them come out and pull such a huge upset over the Lady Mustangs?—“I told them the same thing I told them the last three games, I’m not worried… I’m just glad they believed me.”

Jumping Eagle had 12 points, 7 rebounds, 4 steals and 3 assists for Little Wound. Mesteth and Bear Killer each chipped in 8 points. Cox led the Lady Warriors with 18 points, she was 9 of 10 from the charity stripe, had 3 steals, one block, and 8 rebounds. Sydney Fritz had 12 points, 3 steals and 2 assists.

Winner is on their way to the state Class A girls tournament, March 10-12 in Watertown. The only Lakota team left in Class A girls is McLaughlin. They got by Cheyenne-Eagle Butte 60-56 in the Region 6A championship. McLaughlin defeated Stanley County 78-43, and Mobridge- Pollock 68-50 to advance to the final against C-EB.

In other Region 6A action, C-EB beat Chamberlain 68-54, and Crow Creek lost to Chamberlain in the opening round, 54-51.